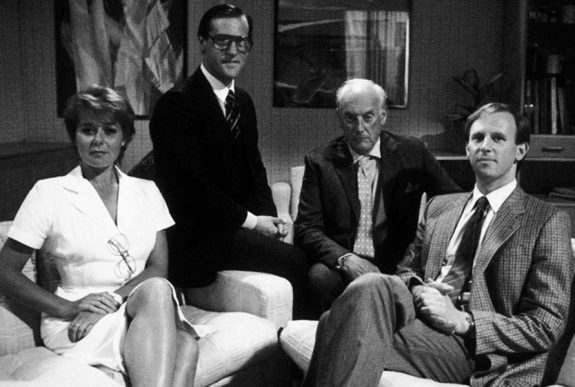 A Very Peculiar Practice is British comedy-drama television series which was broadcast by the BBC in 1986 and 1988 (with a subsequent one-off drama in 1992 called A Very Polish Practice).

The series focus on the medical practice of a fictional university which was built in the 1960s and was once considered to be at the forefront of academia but which is now struggling, in part due to government funding cuts during the 1980s.

The four doctors who make up the medical practice are to a degree archetypes; a pinstripe suit wearing advocate of the free market and private practice – who is also portrayed as not actually being all that bright and/or rather shallow, an older radical liberal who spends his life pickled in alcohol, philosophising about the state of things and talks of the “dark forces” which are bringing about change in the university, a rather manipulative borderline separatist feminist who is also something of a femme fatale and the main character who is new to the practice and appears to be something of an idealist but also a touch wet and at times and ineffectual.

It is the interplay between these four main characters, their different approaches to life, belief systems and how they interact with the changing priorities of the university which is at the core of the series.

The series could be loosely connected to what now appears something of a golden time in British television drama, where it was given space to take risks and provide its audiences with fictional television that was challenging, dealt with sometimes contentious issues and also remembered to entertain; similar series from the period might also include the likes of Troy Kennedy Martin’s Edge of Darkness (1985), Dennis Potter’s The Singing Detective (1986) and Alan Bleasdale’s The Monocled Mutineer (1986).

In some ways such work could be seen as flashes of rearguard resistance to a sea-change in society and broadcasting culture and an increasing dominance of more right and free market ways of operating:

“The conditions for this kind of visionary public broadcasting would disappear during the 1980s, as the British media became taken over by what… television auteur Dennis Potter would call the ‘occupying powers’ of neoliberalism.” (Mark Fisher, quoted from his book Ghosts of My Life, 2013).

While A Very Peculiar Practice may not be as overtly boundary pushing as some of the other above mentioned work and is more rooted, at least in part, in comedic entertainment, it still deals quite overtly with and criticises the changes in society’s dominant values. 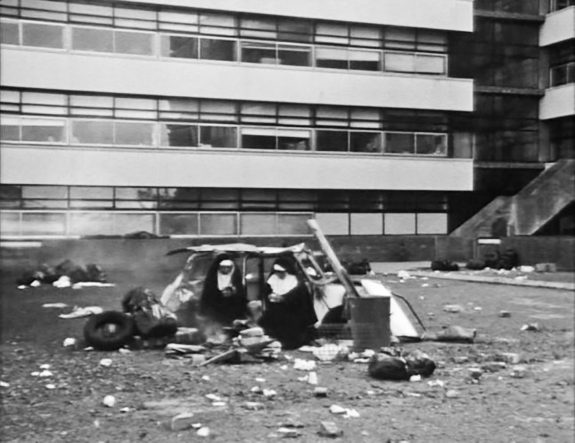 Throughout the series there is a constant push-pull between a more social and community minded way of doing things and the Vice-Chancellors of the university, who wish to move the university more towards being a more commercial and military research minded institution. In the second series the free market and commercially driven direction of the Vice-Chancellor increases in pace and the first episode opens with a harbinger of dark times ahead with the university grounds being depicted as a rubbish strewn almost post-apocalyptic wasteland. Throughout this second series there is an almost blind religious fervour to the Vice-Chancellor’s championing of the new way of doing things and this causes the conflicts within the university to eventual tip over into outright conflict which involves riot police, student evictions and extreme debt/poverty due to rising rent costs and even accidental and in one case directly related death.

Which may well make the series sound like quite an intense, heavy watch but it is actually very comedic and entertaining, with such elements standing up well today. Having said which to a degree the second series is possibly less “fun” to watch as there is a sense of impending doom present in the depiction of the conflicts in the university, whereas in the first series the previous Vice-Chancellor and his drive towards the market and commerce is portrayed at times in a more farcical way and his efforts often seem to be undone by the university’s old guard.

Curiously the Vice-Chancellor in the second series, who is particularly market orientated, says that the students of the university do not matter as a source of funding and advocates removing them from university life. This aspect of the series has not proven overly prescient as the expansion of higher education in Britain has actually happened in large part due to the increase in student numbers and latterly the fees they pay. Student poverty, once something of a topical issue, does not today appear to be so foregrounded as essentially during UK university life students now have to pay fees but they also have much greater access to loans and so today it is not poverty so much as future debt which is of concern.

In the closing scenes of the final episode of the second series the viewer is shown that the free market value have triumphed and it is no longer a university but a private research establishment geared purely towards military research; the idealistic younger doctor stands outside the fences of his former place of employment and laments how it could have “really been something”.

The setting of the university and its buildings, which are very much in the concrete brutalist architecture style, lend a certain harshness to the environment, although the grounds are pictured as being more of a pleasant landscaped nature and the architecture also seems to connect it with the progressive, sometimes radical ideals of the 1960s. At the same time the series is firmly rooted in the time of its making by the likes of then contemporary political activist posters on walls and graffiti which, somewhat comically but also reflecting the time, calls for students to for example join in a “Dance again Keith Joseph” (a member of the government at the time and Secretary of State for Education and Science from 1981-1986, who at various points promoted controversial views and was particularly unpopular with student activists).

The head of the student union, an opportunist suit wearing spiv like character who  is largely out for his own gain and promotion, also connects the series with real world politics as he appears to a degree to be a comment on Derek Hatton, who was the Deputy Leader of Liverpool City Council from 1983. The council’s clashes with the Conservative government over restrictions on spending were a prominent fixture of the news at the time and Hatton was at points portrayed in the media in a not dissimilar manner to the head of the student union. 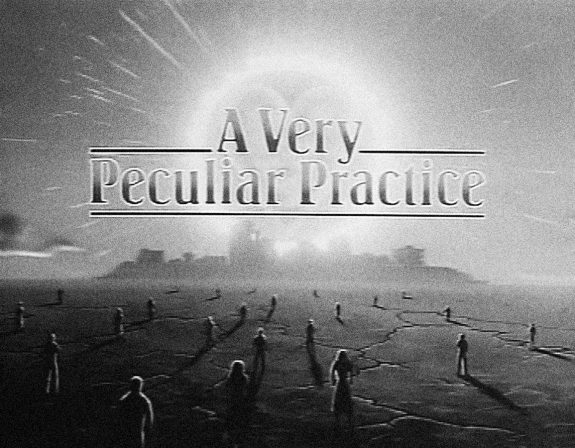 The introductory sequence for the series begins with an isolated city in a cracked earth landscape, under an ominous darkened sky, in front of which a series of small human figures materialise, growing in number and initially advancing towards the city before standing still outside it. A heart like sun then rises from behind the city, bringing a golden all-encompassing light to the landscape which quickly grows in strength and seems to envelop or possibly dematerialise the figures. While the theme tune is a soft-rock song sung by Elkie Brooks, it appears nearer to the visuals that might accompany a hauntological orientated Boards of Canada-esque track and while possibly meant to be uplifting appears almost apocalyptic.

This connection to the less mainstream areas of music is also given expression in the series when the noise orientated music of the industrial/alternative band Slab!, who were initially active between the mid-1980s and early 1990s, is used in a live performance where a research student and his band’s performance are essentially an experiment in audio weaponry. The student initially appears to have culturally radical and experimental aims but after the success of his research project he is shown as being quite happy to have been headhunted for lucrative commercial research work and he drives off in a flash new car.

Which in many ways could be seen to be an expression of the core debates within A Very Peculiar Practice and the directions which it warned that higher education and society in general might travel.