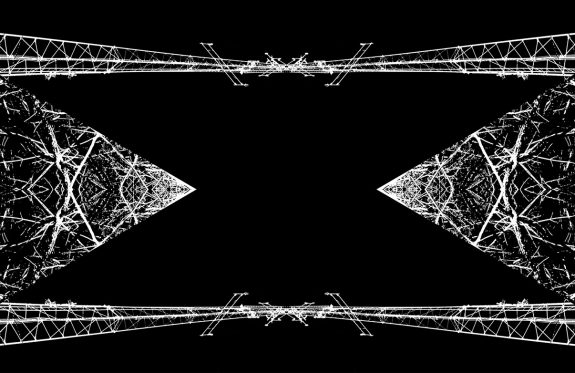 Artwork from one of the cassette editions of the A Year In The Country Airwaves: Songs From The Sentinels album.

“A study of the tales told/required to be told by the sentinels/senders that stand atop the land; a gathering of scattered signals plucked from the ether, cryptograms that wander amongst the airwaves, fading, tired and garbled messages which have journeyed from nearby or who knows where… The Airwaves set of audiological constructs are an exploration that begins with and via silent but ever chattering broadcast towers; their transmissions and sometimes secrets – the songs they weave from their own particular language and emanations… Airwaves harvests, weaves with and recasts the transmissions found amongst the gossamer strands of that network, intertwining these with and through the medium of cathodic reverberations/mechanisms while also taking ministrations from the wellsprings and flows of an otherly pastoralism, travelling through and amongst the brambled flipside of an Arcadian idyll and the subcultural undergrowth of the wald.” (From the text which accompanies the album.)

“From the faint radio signals of the first tracks to the static electricity currents of the central part of the work, from saturated synthetic stratifications to splinters of impalpable noise, the impervious listening route of the fifty minutes of Airwaves: Songs From The Sentinels transcends the collaged material to access an alienating expressive dimension, somewhere between soundscaping and hauntology.”  (Excerpt from a digitally translated review at Music Won’t Save You.)