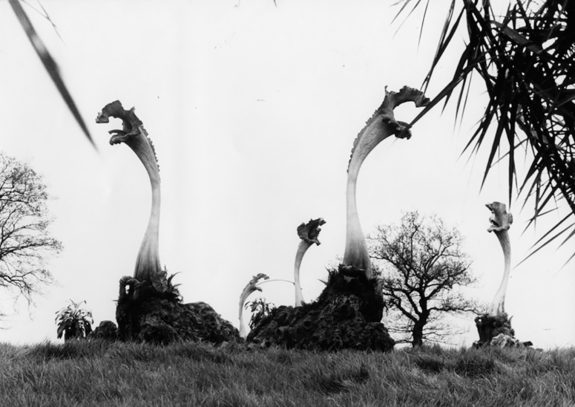 Part 2 of a post on the 1981 television British television adaptation of John Wyndham’s 1951 novel Day of the Triffids (visit Part 1 here), in which:

“…the vast majority of humans are struck blind after watching a night-time cosmic light show/possible meteor shower and they become prey for triffids – large carnivorous plants with the ability to walk and kill which had previously been bred because they produced high quality oil.”

Post the catastrophe in the series as Bill Masen, the main male character, meets some of the few other non-blind people one of the core themes of the series becomes whether to save a few blind people for a while or to take a more pragmatic route that would involve leaving them to their fate while attempting to rebuild society. There appear to be a lot of the non-blind survivors who fairly instantly grasp the role of being dogmatic near dictatorial leaders and to a degree the series becomes an examination of “the will to power” and the asserting of the moral right of differing opinions.

One character, Jack Coker, considers it the sighted’s duty to stay in London and help the blind and uses force to make this happen – hence the just mentioned press ganging of Bill, while another opposing group is described as planning on abandoning all previous morality in its aims:

“They seemed to believe that the human race cannot survive without the complete abolition of morality as we’ve understood it before. That everything should be subservient to the production of children and that whether a child is the product of true love is of no importance at all.”

(According to that viewpoint new-born children have a high value as they will have sight, women are of high importance because they can produce such children and both men and blind people are not as important or needed in as large numbers as women because one man could effectively help procreate children with a number of women.) 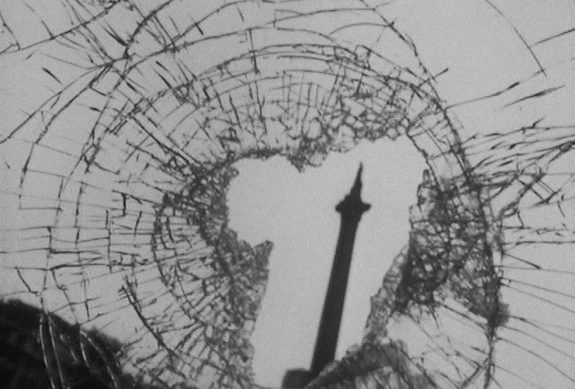 Eventually as the harsh realities of this new world sink in Coker realises that “Good intentions aren’t enough any more” but he does not fully abandon his principles and seeks out and joins a realistic but more progressive group of people who plan on creating a new and better society, beginning on the Isle of Wight, which due to being an island has been easier to clear and defend from triffids.

This more progressive society is in contrast to a proposed more militaristic one which attempts to co-opt Bill, his family and companions who have created a safe(ish) enclave out in the country; an imperialist like military commander arrives in an armoured car and effectively offers Bill the post of being the head of a feudal clan. He also proclaims that the seeing children will be taken away to help other areas as, according to his unbending bureaucratic calculations, there is too high a ratio of sighted to unsighted people there. He also declares that the organisation which he represents is planning on becoming the dominant ruling group by the use of force if necessary:

“The word war is an unjustifiable exaggeration. It will simply be a matter of pacifying and administering the tribes that have converted to primitive lawlessness.”

Bill and the others reject this plan and via subterfuge depart for the more progressive community they have been told about by Coker, disabling the armoured car, smashing open the protective fence’s gate when they drive off and leaving the commander and his men to be attacked and presumably killed by triffids. While the commander is smug, self-satisfied, dictatorial and priggish this seems a little harsh, although it may be necessary for Bill et al’s survival and escape. 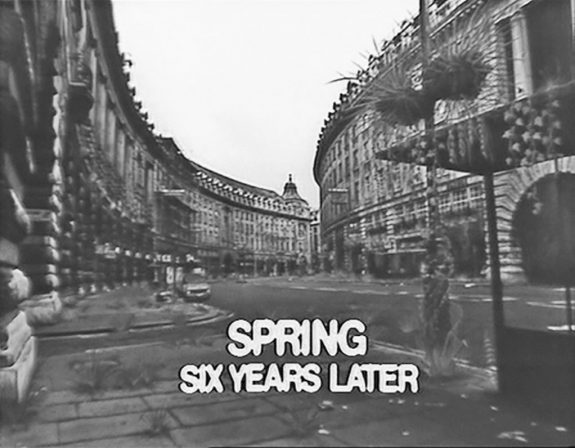 In the series it is discussed just how complex and difficult the civilised human supply chain is, how difficult it is to feed ourselves or even to get raw food. Connected to which cities, which previously relied on a large-scale infrastructure, almost instantly become only useful as stores for pre-catastrophe society’s materials and equipment, although how long such things will last or be available is debatable. Also the cities become dangerous places as buildings crumble and collapse and nature reclaims the streets (something which is shown in a still impressively convincing manner, as London streets and landmarks are shown covered in greenery).

Bill, his family and companions seem remarkably well-adjusted considering that society has collapsed and they are beset by carnivorous plants – although mental collapse does not seem to be overly depicted in such fictional post-apocalyptic works, possibly because the reality of survivors suffering such collapse and/or say post traumatic stress disorder would not necessarily make for easy plotting.

(A notable exception to this is a section in the 1985 post-apocalyptic film The Quiet Earth, where one of the lead characters for a period embarks on a crazed and destructive binge, although he still returns to normality and stability relatively quickly and easily.)

There is a sense that Bill and the other’s lives in the rural enclave is only maintainable as an isolated unit via foraging materials and equipment from the pre-catastrophe society; their clothes appear factory produced and are not threadbare, they use flamethrowers to destroy triffids, drive fossil fuel powered vehicles, use generators and so forth. 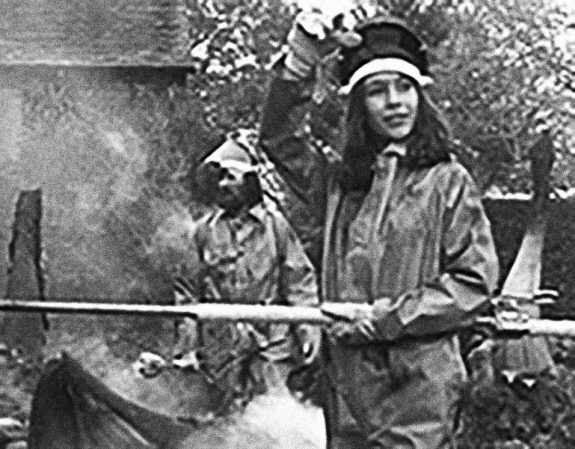 Also the area in which they live, grow food and are shown as keeping a few livestock animals is depicted as being relatively quite small, possibly partly because it needs to be surrounded by an electric fence they have put up to defend against triffids. It is debatable how such a small area could provide enough fresh food for the inhabitants on an ongoing basis, so it is quite possible that they are still supplementing their farming by the foraging of dried and canned goods – which ultimately are likely to be depleted, no longer be edible or not easily transportable through the triffid infested areas outside their enclave once vehicles malfunction and/or the remaining fuel supplies are depleted.

Ultimately the series appears to take quite an optimistic view of human’s survival in such conditions and also seems to show that society will not revert to a pre-modern, more say medieval way of living, as people continue to use and have access to pre-catastrophe vehicles, well maintained homes, equipment etc. 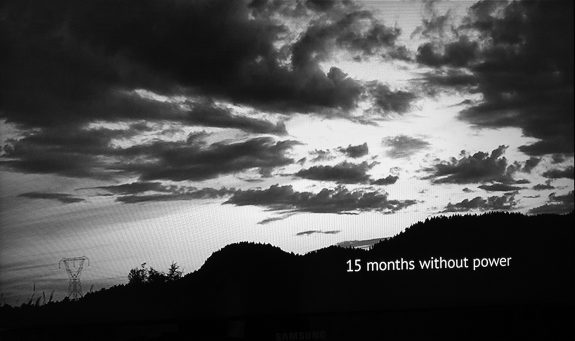 This is in contrast to the post-apocalyptic film Into the Forest (2015), in which ultimately the comforts and shelter of the pre-catastrophe society and the family home literally disintegrate and two sisters decide to abandon their home and return to a more natural way of living. 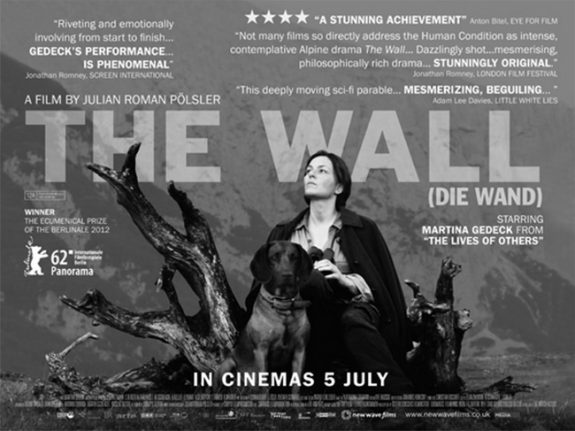 As in Into the Forest and other post-apocalyptic films such as The Wall/Die Wand (2012), the events which have led to society’s collapse are not fully explained in Day of the Triffids; as mentioned previously the populace become blind due to viewing an apparent meteor shower but why this has the effect it does it not known or told – although it is posited that the meteor shower may have actually been a malfunctioning satellite based weapons system and that society “messed up” by not questioning what its leaders were doing, nor did those leaders tell the populace, in terms of creating weapons systems etc.

Ultimately the Day of the Triffids series ends on a positive note as Bill, his family and companions seem to have achieved a successful escape from the militaristic commander and in the final scene he and his partner say:

“Shall we ever be able to come back?”

“Oh yes we shall. We’ll work and we’ll learn and then we or our children will come back and drive every triffid from this land.”