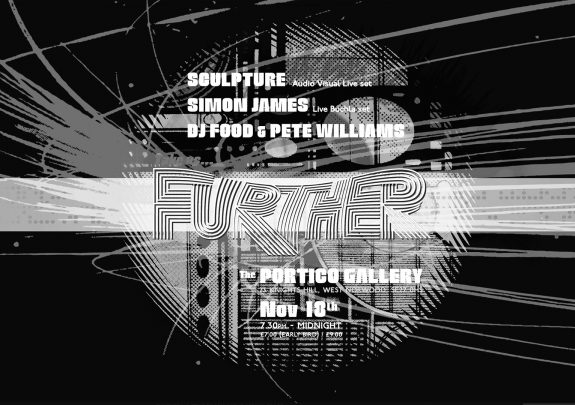 DJ Food and Pete Williams’ Further event has a second installment on November 18th (ticket info can be found here), the first one of which I wrote about a while ago… 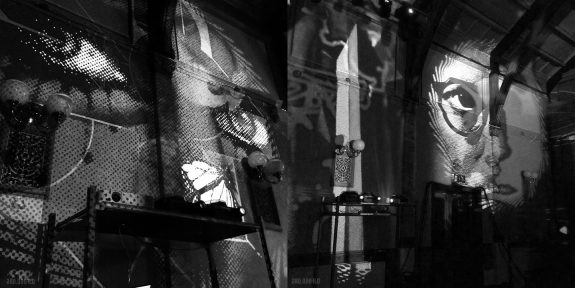 At this second event DJ Food and Pete Williams will be once again creating their multi-projection Further environment, which from the images I have seen seems to have an immersive, layered, enveloping atmosphere and accompanying them will be audio-visual live sets by Simon James and Sculpture.

The preview videos for Simon James’ performance feature gentle, dreamlike patterns, which at times puts me in mind of abstracted sea creatures, possibly sea anemone’s… and also, while it has a character all of its own, at points it shares similar territory with some of the film work Julian House has produced for Ghost Box Records, creating imagery where hazy geographic shapes and forms seem to contain some kind of hidden, otherly message that you can’t quite decode.

And just as there often can be with filmed recordings of some sea creatures, there is a drift to these images and they hypnotically draw you in as they are accompanied by ambient spectral synthesized music.

(Simon James has also worked as part of Black Channels, whose particularly rare cassette release Two Knocks For Yes is well worth seeking out in one form or another – it’s still available digitally. Amongst other things it is an intriguing mixture of Radiophonic-esque synthesis, poltergeist exploration and recordings of ghost reports. He has also created the Akhai Den Den album and project, which is a soundtrack and radio drama set in a crumbling amusement park, which I expect I may well visit further around these parts at a later date.)

Sculpture is the duo of Dan Hayhurst and Reuben Sutherland whose audio-visual work utilises a wide array of analogue alongside digital techniques to create an at points cut-up-esque swirling montage of sounds and images.

The picture discs they have released come alive and full of animation once they begin to spin on the turntable, recalling the early pre-celluloid days of moving images, along which lines they describe themselves as utilising a “library of zoetropic prints” (zoetropes were a mechanical form of producing moving images via spinning cylinders that were initially created in the 19th century).

…while at other times their work includes cosmic, surreal, nature infused images…

…which intermingle with what could well be escapees created from either/or/both the BBC Radiophonic Workshop and the Berberian Sound Studio.

There are a number of different cultural themes and strands within the Further events but looking at related images and videos for this second event a word that kept occurring to me, particularly in terms of the visual work, was psychedelia.

Not psychedelia in a retro, retreading, style, rather a contemporary take, exploration or progression of such things.

Taken as a whole and loosely gathered together, such work as that at the second Further event made me think of Trish Keenan of Broadcast’s quote/comment on her interest in and connection with psychedelia:

“I’m not interested in the bubble poster trip, ‘remember Woodstock’ idea of the sixties. What carries over for me is the idea of psychedelia as a door through to another way of thinking about sound and song. Not a world only reachable by hallucinogens but obtainable by questioning what we think is real and right, by challenging the conventions of form and temper.”
(Taken from an article on/interview with Broadcast by Joseph Stannard in Wire magazine, issue 308, October 2009. It can also be found in an unedited version online at Wire magazine’s site.)

I don’t want to make the Further events sound all overly serious though. What they seem to be in part are an attempt to create a night-time space that moves beyond a purely youthful focus and preoccupation, somewhere you can go out, enjoy a bit of exploratory/experimental music and visual culture and also kick back a bit. 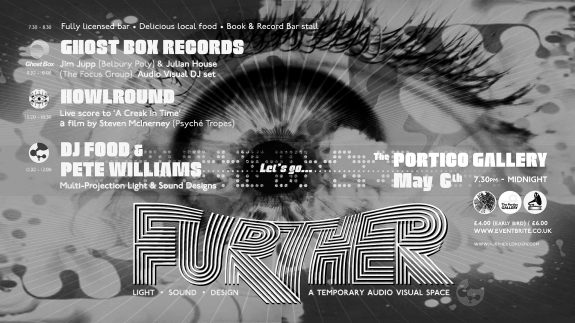 Or to quote DJ Food and Pete Williams themselves when describing the first event, the flier for which is above, Further is:

“An irregular event held in different places, it’s not a club night, it’s not monthly, there’s no dance floor. It HAS got all the things we love in it though: experimental music and film, food and drink, socialising and a bit of record hunting. Taking old analogue image making techniques from the 20th century and recontextualising it into new spaces for today.”