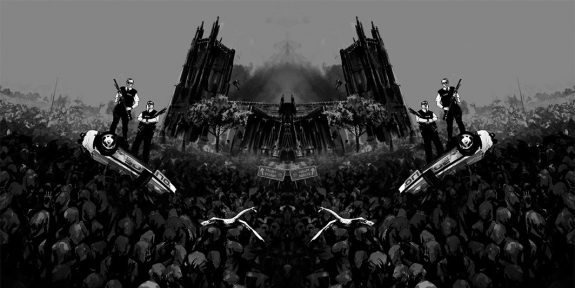 This is Part 2 of a post on Edgar Wright’s film Hot Fuzz. Part 1 can be visited here.

In Part 1 of this post I wrote about how Hot Fuzz referenced and was an affectionate home to American action buddy copy films such as Point Break, the Bad Boys and Lethal Weapon series of films (and also mentioned how Wright says that he originally pitched it as Rural Weapon).

Alongside it referencing such films, there is a strong nod towards what has come to be known as folk horror, in particular The Wicker Man (1973); in both films a priggish outsider policeman attempts to solve a mystery in a rural community where something untowards may be afoot and is lead on a merry dance by its inhabitants. This connection is made more implicit by the presence of Edward Woodward in Hot Fuzz, in his second to last cinema role.

In The Wicker Man Woodward played the priggish policeman Sergeant Howie who was investigating the rural folk on the side of the law and (to his mind) societal decency. This is stood on its head in Hot Fuzz as he is involved in the murderous conspiracy and is eventually shown as the last living rogue villager when near the film’s end he bursts into the police station and attempts to shoot Angel. He is foiled but accidentally activates a sea mine which Angel had earlier confiscated along with an arms cache from a villager. He is killed and the station is destroyed in a manner that in seems to bring to an end or close the circle of a story cycle in British cinema. 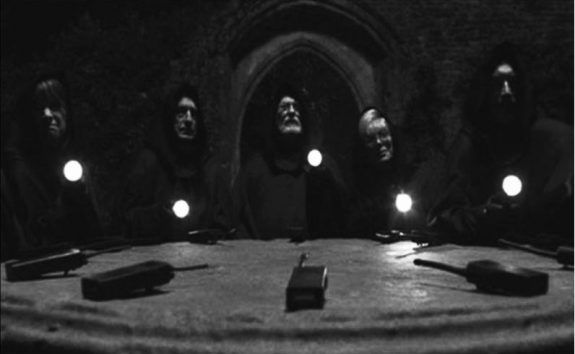 The film also has nods towards 1970s British horror, in particular that era’s portmanteau films and interest in witchcraft and the occult; ultimately the murderous conspiracy is shown to be the result of the actions of an essentially morally corrupt/very misguided village organisation (the Neighbourhood Watch Alliance or NWA – a humorous reference to and contrasting with the American urban gangster rap group). When Angel visits a secret NWA meeting they appear to be nearer to a coven or cult as they have gathered at night in black shawls and hoods around a stone table in a castle. However they still retain a curious friendly neighbourhood committee air as they discuss their dastardly deeds, which is mined for comic effect.

In a further connection to 1970s horror the death/murder of a journalist who is planning on revealing information about goings on in the village by falling church masonry also seems to reference such things in The Omen (1976), wherein a priest who is attempting to reveal secrets is killed by a lightning rod thrown from a church roof during a storm. While the film also references Hammer Horror-esque gothic films when Angel flees the NWA and falls into a catacombs filled with the bones and dead of those they have killed.

(Notably these murders have taken place due to relatively minor infractions which threatened to infringe on the village’s bucolic “ye-olde world” atmosphere, such as a metallic painted living statue mime artist who is found by Angel still holding his mime pose despite his deceased nature.) 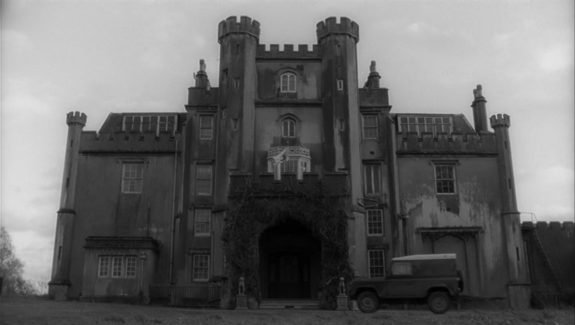 Although to my knowledge not openly referenced by Hot Fuzz’s director or co-writers the film also shares some territory with an episode of the remake of television series Randall and Hopkirk (Deceased) which was broadcast on British television in 2000-2001. In particular the episode Man of Substance which also tells of a sleepy country idyll gone bad and is rather folk-horror like in its plot which tells that its population have been trapped in between life and death, unable to leave the village since the days that a pestilence had caused the demise of a considerable percentage of the English population a number of centuries previously.

As with Hot Fuzz this episode (and others in the series) is in part an affectionate homage to previous era’s horror and genre cinema, particularly in relation to folk/rural aspects of such work.

At the NWA meeting the head of the local police Inspector Frank Butterman, Danny’s father in the film who is played by Jim Broadbent, is shown as being one of the instigators of the conspiracy in a thoroughly misguided attempt to honour his wife’s memory and her wish to keep the Village of the Year title. 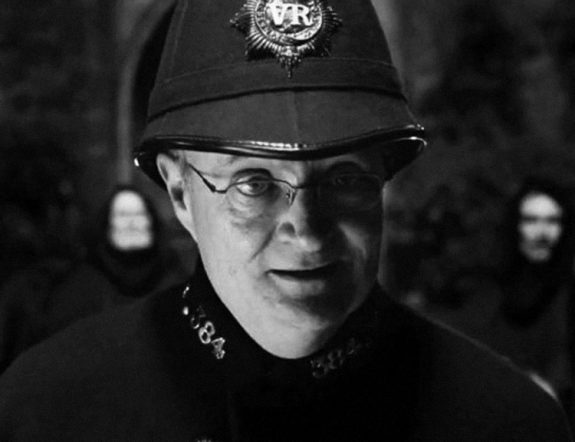 In contrast to Nicholas Angel his uniform appears to be nearer to that of an earlier era. This subtly unsettles expectations and norms as in a rural setting such a figure summons a sense of an avuncular “good old British bobby” and a previous gentler way of life rather than the mayhem over which he has presided.

As in The Murdersville episode of television series The Avengers, which I have written about at A Year In The Country previously and also The Wicker Man, Hot Fuzz flips the chocolate box idyll of the British village and rural communities on its head and shows them to be the “unknown” or other; a threatening and deceitful group closed and separate to the outsider or city dweller, with ways, morals and motivations that appear foreign and at a far remove from mainstream and urban society’s mores. 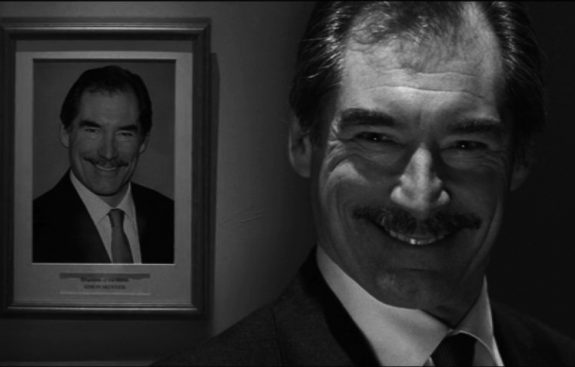 Hot Fuzz’s reversing of expectations and settings is further heightened when in a climactic scene Angel pursues and fights another of the conspiracy’s prime instigators ocal supermarket manager Simon Skinner, played by former James Bond Timothy Dalton, who is the film’s resident arrogant bad guy.

This scene takes part in a symbol of gentle Britishness – a miniature model village – with Angel and Skinner towering over the buildings and seeming nearer at points to giant battling monsters that might be found in science fiction/fantasy films. As with similar sequences in such films their fight leads to the literal destruction of whole structures, although here they are the small-scale replicas of the model village rather than say actual city skyscrapers.

After his first defeat and mirroring many such multiple returns of the bad guy in American genre film Skinner rises back up and attempts to attack Angel with a small plastic handled box-cutting knife rather than say a machete or similar weapon that might be seen in its overseas equivalent. The use of this prosaic and relatively small weapon along with the general wrongness of the setting of a pitched violent battle in a model village heighten the sense of the out-of-place nature of such actions amongst a bucolic idyll.

Before being defeated Skinner shouts:

“Get out of my village.”

To which Angel replies:

“It’s not your village anymore.”

Which would seem an apt point on which to end this post.