This is Part 2 of a post on Thom Eberhardt’s 1984 cult film favourite Night of The Comet (Part 1 can be viewed here).

Although made to a background of the real world worries of heightened tensions in the Cold War, in Night of the Comet there is a certain matter-of-factness to how the main female protagonists respond to civilisation having suddenly ended; it does not seem to overly throw or even concern them all that much, although they are not without emotion about people and potential romantic partners they have lost.

Without being shown as overly ditsy they often seem more concerned with whether or not they will be able to get a “cute” guy and their outfits than that the world is now nearly empty of humans other than a few zombies. 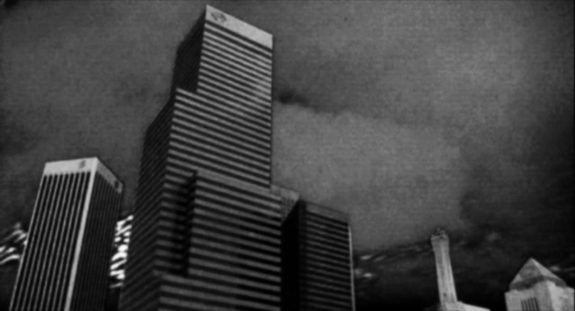 This aspect was inspired in part by Thom Eberhardt asking real-life teenage girls who he met while filming PBS Specials how they would react to an apocalyptic event, something which one online source is quoted as saying that apparently they saw as an exciting adventure which they only saw a downside to when the subject of dating was brought up; post-apocalypse = a dearth of cute guys (!).

Although in the Arrow Blu-ray notes this aspect is mentioned more in terms of the respondents’ fears when Eberhardt had listened to “two ordinary teenage girls as they struggled to confront the sheer, terrifying enormity of what nuclear holocaust actually meant.”

At the time of its making the communist bloc was being depicted in the US as “the evil empire” and this may find expression in the film, as James Oliver also mentions in the Blu-ray notes that the scientists who Regina and Samantha battle are:

“Dressed in drab, conformist grey jumpsuits and guided by a bland utilitarian philosophy that makes no regard for freedom or individuality… they represent the sort of hive mind mentality that was so often associated with communism during those years.” 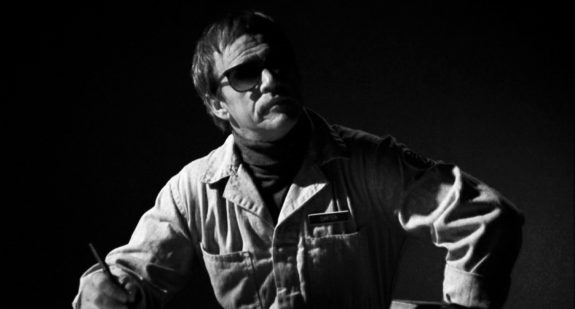 An alternative take on this as a contemporary viewer in a world that has been exposed to the conspiracy theories and public mistrust of the motives and behaviour of governments and large institutions in for example the television series The X-Files (1993-) and via widely publicised examples of real world corruption etc, is that the main human villains – the parasitic conformist scientists who come forth from the underground bunker of some undefined think tank – appear to be nearer to the malign forces of the sisters’ own supposedly friendly government than to represent some foreign “other” threat.

Adding to the sense of layered reference points and a grounding in the real world in the film other contemporary and contentious political events are also mentioned; the sisters have been left alone to live with their stepmother by a father who has gone off to fight the Sandinistas in South America in an actual historical campaign which has since been criticised for having questionable legality and utilising brutal methods.

Overall the apocalypse in Night of the Comet seems to be curiously pleasant, in particular as it does not address basic supply problems such as how will the survivors find food, water and supplies on a long term basis? They also almost always appear well-groomed and dressed. 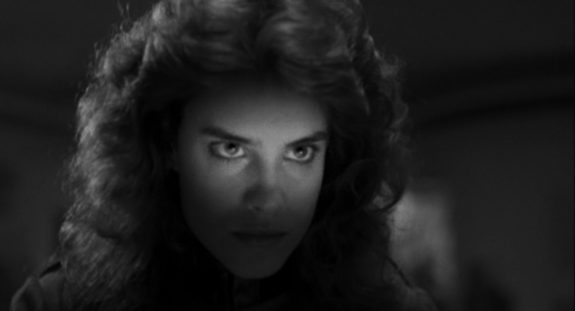 Without mention of the oddness of this being the case tap water is still available and the electricity supply remains constant, which allows for the setting of the final scenes of the film; when we first see Regina she is shown as a teenage slacker working at a cinema who is only really interested in playing an arcade game (cue classic 1980s eyes-lit-by-the-glow-of the screen shots) and in discovering who is the mystery player listed amongst her high scores, the presence of which vexes her.

She has to be asked repeatedly by her boss to undertake the duties of her job who in an expression of the older generation not being impressed by the younger tells her “Don’t be an over achiever, you’ll fit in better with your age group.” 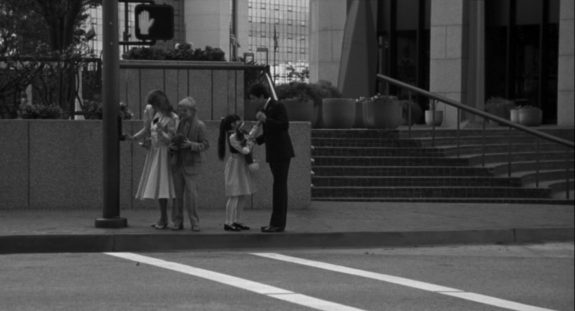 By the end of the film she has taken on the mantle of a settled and responsible parent and she along with her partner Hector and their essentially adopted children are shown as being part of a typical all-American family (although one which is inclusively representative of different backgrounds and ethnicities – which is merely shown rather than overtly signposted or commented on).

They stand waiting for a road crossing light to change and Hector, Regina and her sister have the following exchange:

“What are you waiting for?

“We’re waiting for the light to change.”

“We do not cross against the light.”

“Are you nuts, Auntie Regina?”

“You may as well face the fact Samantha, the whole burden of civilisation has fallen on us.”

And there is no need to worry, Samantha also finds a partner as another lone survivor drives into view and the film again references classic 1980s teenage film tropes; he is fashionably dressed, nicely turned out and as Samantha  comments he has a “nice car” (actually he has 38 of them, finance now no longer being a problem), all of which within film genre language show him to be a “cute” guy, i.e. eligible and more than acceptable as potential boyfriend material.

After Samantha and him raise their sunglasses to greet and appraise one another they soon make their decisions and drive off on a date with the otherwise doomed to singleton sister as her now surrogate adult older sister shouts after her “Just be back by midnight”.

As a humorous linking to the start of the film as they are shown driving away the initial of his personalised number plate reveals that he may well be the mystery arcade game high scorer who had vexed Regina. 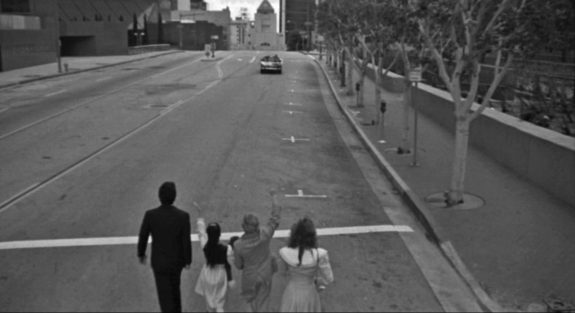 In the final shot of the film Regina and her new family unit are shown undertaking day-to-day family activities –  playing ball and taking Polaroid snapshots – on a deserted post-apocalyptic city highway, which leaves the viewer with an optimistic and hopeful view of the future.