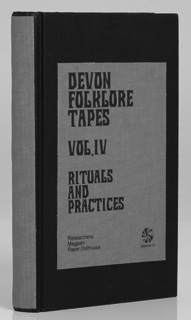 Now, if you want a lesson in how to create an intriguing, secret world unto itself then here would be a good place to start.

Originally monikered Devon Folklore Tapes, this could be called a record label but how it has been created and presented to the world it feels more akin to an arcane research project.

The mainstay of it’s releases are especially commissioned music projects/soundtracks (again I feel that research project would be more appropriate), generally presented on good old ferrous compact tapes which are housed in adapted, hollowed out hardback books which were very limited in quantity (ie 30 copies and once they were gone they were gone). Hens teeth is a phrase that comes to mind.

I think for a while that was the only way you could hear any of the resulting work. I liked the fact that in order to listen you would have to dig out a dusty old tape recorder and actually sit down and listen (initially I thought my copy of one of the tapes had been recorded in mono as I was listening to it on an almost end of the line dictaphone I’d bought in the mid 2000s and I didn’t realise that it would only play one channel of the tapes)… 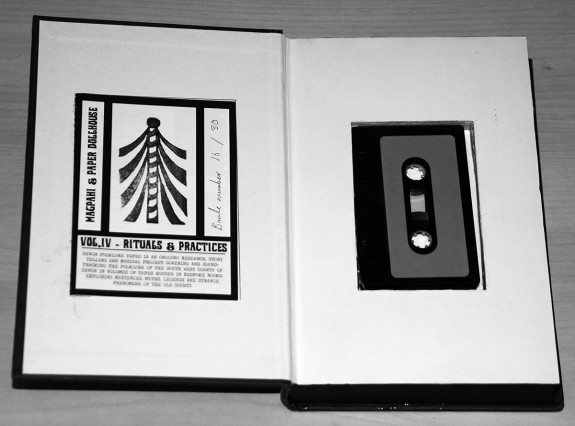 Now, generally they also come with a download code and there are often simpler packaged copies of the tapes also available… but when they are released there is generally a feeding frenzy and whoosh they’re gone (something I often find out about just after the fact so that I can hear myself say “Darned, not again”).

The collaborators/creators of the series have included Rob St John, Children Of Alice (part of Broadcast), Anworth Kirk and David Orphan… though my favourite volume is number IV which features Finders Keepers cohorts Magpahi and Paper Dollhouse: the Magpahi side is all… well, I don’t know quite how you would put it but I think haunting folkloric vocals and quite an interesting pop sensibility while Paper Dollhouse wanders off into early morning free floating word association.

I think Boomkat put it quite well: 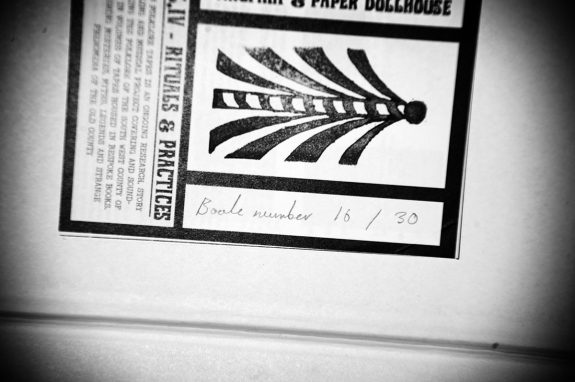 “Volume IV in this enchanted series surveys ‘Rituals And Practices’ connected to the folklore of Devon in the south west of England. Research was carried out by Magpahi and Paper Dollhouse into the myths, legends and strange phenomena of the old county, resulting in a creaking combination of wyrdly symbolic sonic energies and spirits that manifest as haunted ambient pop and folk song. At risk of breaking the spell, we won’t go any further, other than to tell you this is our favourite in the series so far and comes recommended to fans of Broadcast, Nico, stone circles and fine storytelling.” 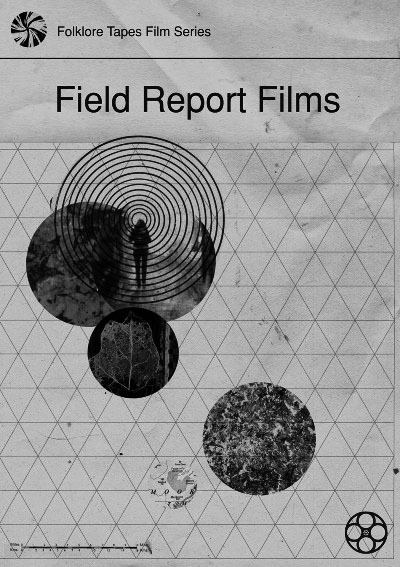 …which I think is the first place I heard any of the music and it just stuck in my head and I seemed to have to own it (a fair few possibly nolonger wanted items were flung on the pyrrhic reselling market in order to purchase a copy if memory serves me right).

What else? Well, it’s not just the tape releases, there are field trips, events, photography, newsletters mailed to you in the traditional paper style and more. I particularly like head honcho David Chatton-Barker’s design work, well worth a look-see…

I shall leave the (almost last) word to Folklore Tapes themselves:

“Folklore Tapes is an ongoing cassette-based cult devoted to exploring the folkloric arcana of the farthest-flung recesses Great Britain, via divinatory research, abstracted musical reinterpretations and experimental visuals. Exploring mysteries, myths topography and strange phenomena of the old counties. This site will archive designs, research and production of each volume.”
Sites of interest:

Place where you can see that the tape you wanted is sold out.

Place where you can see if you can afford a previous volume.