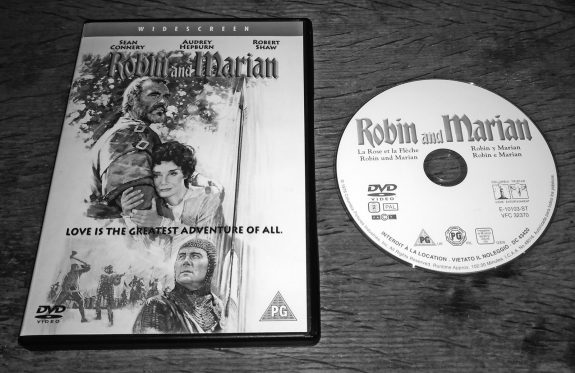 The 1976 film Robin and Marian is an interesting take on the myth and history of the tales of Robin Hood.

This isn’t a flash, escapist take on those tales, rather it is in parts a quite melancholic film about in part ageing, loss, past glories and what happens to the life, loves and myths of a living legend as the years pass. 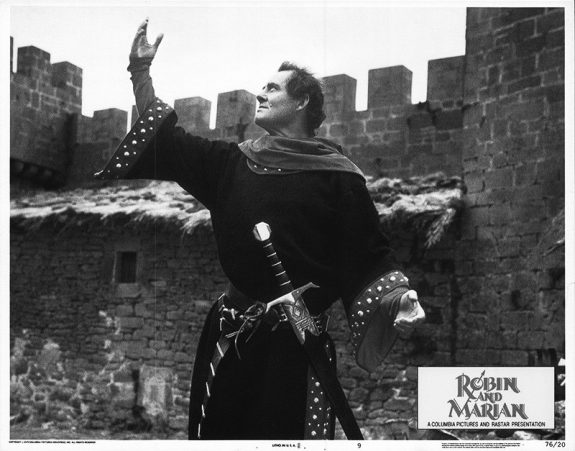 While a number of the locations seem to be fairly undisguised and barely reconstructed actual crumbling rural castles/keeps.

It was directed by Richard Lester, who is also known for the likes of The Beatles’ romps A Hard Day’s Night and Help!, The Knack… and How to Get It, post-apocalyptic curio and BFI Flipside release The Bed Sitting Room, the star studded 1973 version of The Three Musketeers and in the 1980s the superhero blockbusters Superman II and III.

The film features Sean Connery as Robin, Nicol Williamson as Little John (who would go on to play Merlin in John Boorman’s 1981 film Excalibur, which reimagines of the myths of King Arthur) Audrey Hepburn as Marian (returning to cinema for the first time in eight years) and Robert Shaw as the Sheriff of Nottingham. 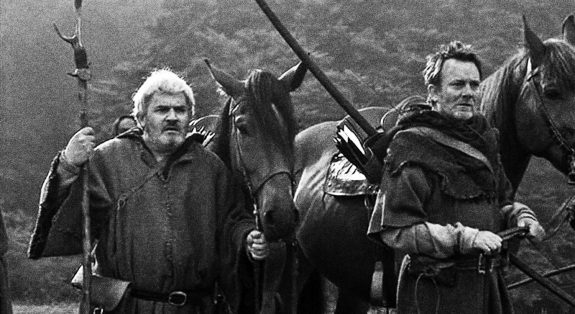 Alongside which the film is also noticeable for the number of classic British dramatic and comic actors in the cast: Richard Harris, Denholm Elliot, Ronnie Barker, Ian Holm and Bill Maynard (the one time Selwyn Froggitt).

In the plot many years have passed since Robin led the fight for the poor of Nottingham, he has been off fighting in the Crusades under the command of King Richard the Lionheart. He has returned to England, which is now ruled by “mad” King John and Robin regroups the members of his old Sherwood Forest band of merry men. 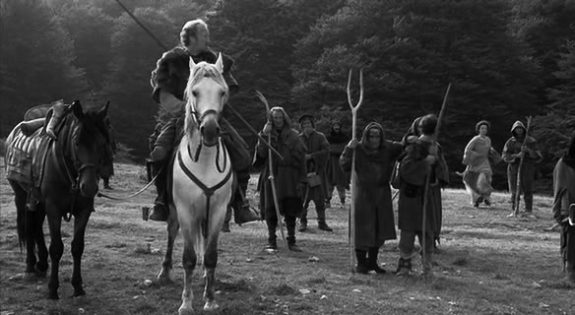 Robin’s old nemesis the Sheriff of Nottingham is ordered by the king to remove the clergy from the countryside, causing Robin to go to the aid of and rescue his old love Marian, who is now part of a religious order.

Even after his extended time away Robin retains a legendary status and following amongst the common folk of the land, who gather around him in his forest stronghold to stand against the forces of authority and the scene is set for a final confrontation between Robin and his men and the Sheriff and his troops.

As I just mentioned though, this isn’t a swashbuckling rerun of the myth of Robin Hood – possibly reflecting a wider trend in 1970s television and film it is in parts quite downbeat and even a gritty realist film.

(Although accompanying which at times it seems to almost be two films in one, as at points it becomes a sort of old fashioned Hollywood melodrama accompanied by a traditional and possibly even old fashioned cinematic score.) 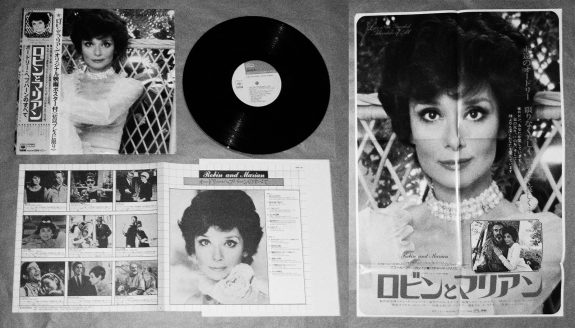 (The curiously glam packaging for the Japanese edition of the soundtrack.)

Robin and the other characters are all shown in a largely unstyled manner, with their ageing allowed to be on show in a naturalistic way, in contrast with much of modern film: there is a sense that they are well past their prime but still trying to carry out physically demanding feats of courage.

Robert Shaw as the Sheriff seems to just be almost acceptingly weary of the whole inevitability of the Robin/Sheriff game of cat and mouse, of the battles between folk hero and upholder of the laws of the land and the whims of its rulers: in fact in the film they are shown to be men who as much as anything seem to be more just carrying out their expected roles, fates and duties, with a certain acceptance of that inevitability and there seeming to be a certain recidivism to the character and actions of Robin.

The ending which (spoiler alert) effectively involves a double suicide/murder/poisoning between Robin and Marian, is also not what would be expected from say a Hollywood take on the tales of Robin Hood. It is curiously both downbeat and also strangely affirming of the enduring love and acceptance between Robin and Marian, seeming to be a final acceptance of this being the only way out of an otherwise unending cycle of violence and conflict due to the inherent character and restlessness of Robin.

(Although Marian is not shown as at all weak willed, there is a certain dichotomy portrayed between her femininity and searching for peace and the opposite characteristics in Robin – something which is made more explicit in the film’s French title La Rose et la Flèche, which translates as The Rose and the Arrow.) 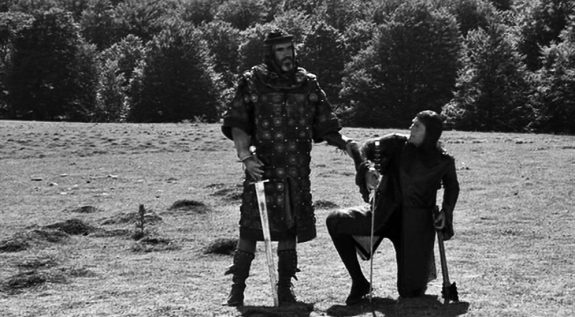 Acceptance as the years pass and an accompanying affection, even tenderness, seems to be some of the main themes of the film – between Robin and Marian, Robin and Little John and even a certain not-all-that-grudging respect and affection between Robin and the Sheriff, which includes a certain gentlemanly chivalry being shown during their final conflict. 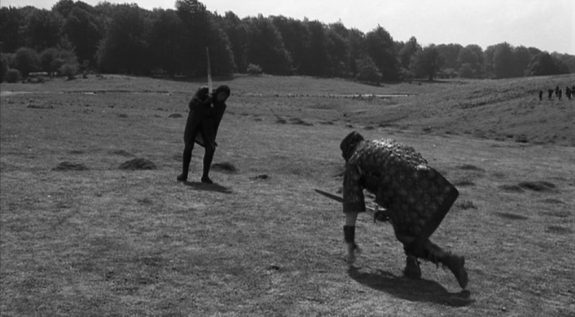 Alongside the film’s open depiction of the ageing process and its effects, the final conflict between Robin and the Sheriff is shown in a more realist manner than is often the way in cinema, with the two men becoming relatively quickly increasingly physically tired and almost unable to fight due to their exertions and injuries.

(Audrey Hepburn’s personal copy of the script – which sold for a fair few pounds and pence at auction.)

In some ways the film could be seen as a battle between the old ways, the freedoms and unrulability of the traditional untamed forest lands and the castle dwelling rulers and forerunners of the more “civilised” or centrally controlled town/city settlements.

Robin and his men normally hold sway and a strategic advantage over the better equipped King’s/Sheriff’s men within the forest. However the powers-that-be are shown as being prepared to gather and camp outside its boundaries, waiting for the rashness of Robin to be his force’s undoing and he eventually breaks cover from the forest to meet his enemy.

His ensuing attempts to settle the conflict through a more evenly matched duel solely between him and the Sheriff are cast aside when the promise of acceptance of the outcome as the deciding factor in the conflict, which was made before their duel by the Sheriff, is ignored by the authorities when Robin is victorious (although this victory is nominal due to the mortal injuries he sustains).

His men are hunted down and defeated – the underlying implication being that this is possibly the end of a certain way of life, freedom, resistance and the rallying call of the legend of Robin, a passing of the old into the new accompanied by the strengthening of the authorities’ rule and power. 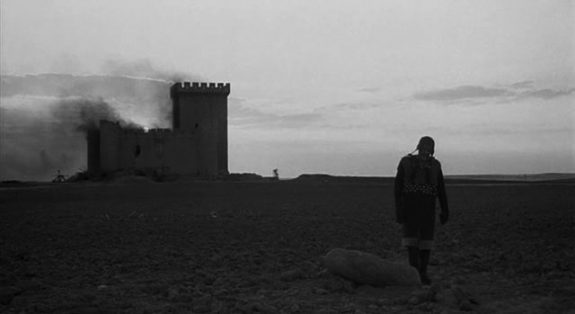 The film is well worth a look-see for a different take on the longstanding myths of Robin Hood and performances by a gathering of actors nolonger in the first flush of youth but undoubtedly at the top of their game in terms of charisma and their invocations of character and a sense of experience gained and life lived.

Elsewhere:
The Robin and Marian DVD – which at the time of writing is available for a rather reasonable pocket money price.
The trailer.