View cart “The Quietened Journey – Nightfall boxset” has been added to your cart.

The Corn Mother: Night Wraiths album, written and recorded by Stephen Prince, is both a soundtrack to accompany The Corn Mother novella and a standalone piece of work.

The novella and album are explorations and relections “of the whispers that tumble forth from the corn mother’s kingdom”. A place and story where fact, fiction, reality and dreams blur into one:

As with the A Year in the Country project as a whole, which they are released as part of, the book and album’s structure are inspired by the cycle of the year. Following the number of seasons, the book is split into four sections; it has 52 chapters (which could also be considered scenes or episodes), the same number as there are weeks in the year; relating to the number of days in a non-leap year, each chapter’s text contains no more than 365 words; and as there are days in a week, the album has seven tracks.

“Spectral, swooping electronics and ominous analogue washes create a barren, shadowed landscape… Chillingly effective and genuinely unsettling, the synth pulses and growls are an adept soundtrack to the terrors in the book itself and work in a similar manner; subtle, pervasive and with a creeping sense of unease… a spooked sense of yearning and obsession played out in the ghost-strewn harmonies…” Grey Malkin, Folk Horror Revival 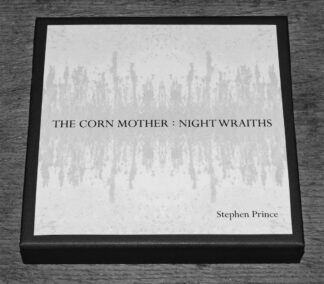