The Forest / The Wald – Dawn Edition in fold-out sleeve

The Forest / The Wald is a study and collection of work that reflects on fragments and echoes of tales from the woodland and its folklore.

In amongst The Forest / The Wald can be found field recording folk that captures greenwood rituals performed in the modern day, echoes of fantastical childhood rhymes, sylvan siren calls that tremble through tangles of branches, electronics pressed into the summoning of otherworldly arboreal creations unearthed amidst the creeping thickets and elegies to woodland intrustions, solitudes and seasons.

Released as part of the A Year In The Country project, a set of year long journeys through and searching for an expression of an underlying unsettledness to the bucolic countryside dream; an exploration of an otherly pastoralism, a wandering amongst subculture that draws from the undergrowth of the land, the patterns beneath the plough, pylons and amongst the edgelands. 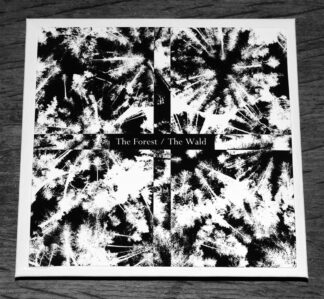