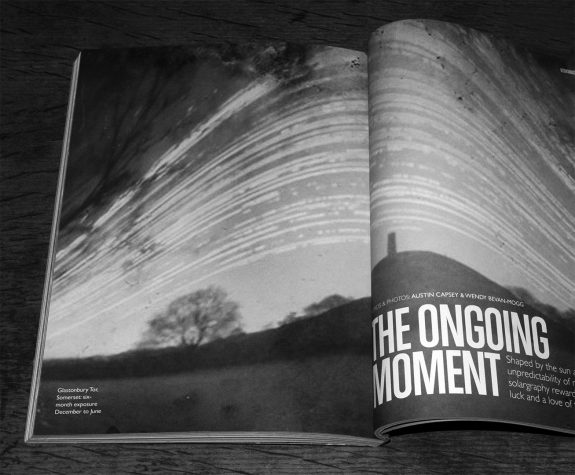 A while ago I came across the phrase solargraphy and the photographic work of Austin Capsey and Wendy Bevan-Mogg in the periodical Ernest Journal.

(Solargraphy refers to a form of long exposure photography and the phrase comes from solar = sun and graphy = writing).

Their work involves leaving pinhole cameras and sometimes an antique more conventional camera to take a single exposure out in the landscape at turning points of the year and returning often hours, a day or months later.

In the Ernest Journal they wrote the following on the process:

“With ultra-long exposures, usually from solstice to solstice, it captures images that describe the movement of the sun, the enduring nature of the landscape, and hold an entire season in a single frame. The exposures are so long that neither animals nor humans are visible; only the tracks of the sun remain. These tracks trace a new new path each day as days lengthen towards the summer solstice – trails sometimes broken by intermittent cloud, and some missing altogether on days shrouded under grey skies.” 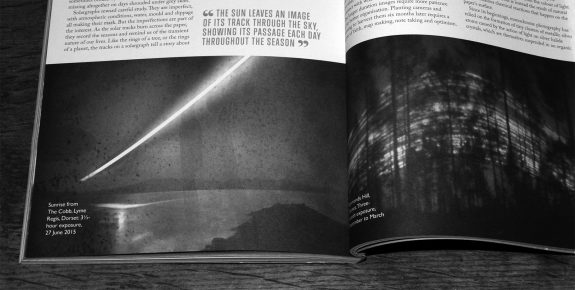 The photographs are taken on black and white stock and contain all kinds of imperfections and colour tinting which results from atmospheric conditions, mould and a literal tarnishing of the metallic silver crystals contained in the photographic film.

Such results occur through the actions of nature, created by the cameras’ time out amongst the elements and although they are essentially random the resulting photographs seem to represent some kind of melding of nature’s hand/art and a humanly directed expressive art project.

There is a strange, entrancing beauty to the images, with them capturing a sense of the passing seasons and cycles of the world. 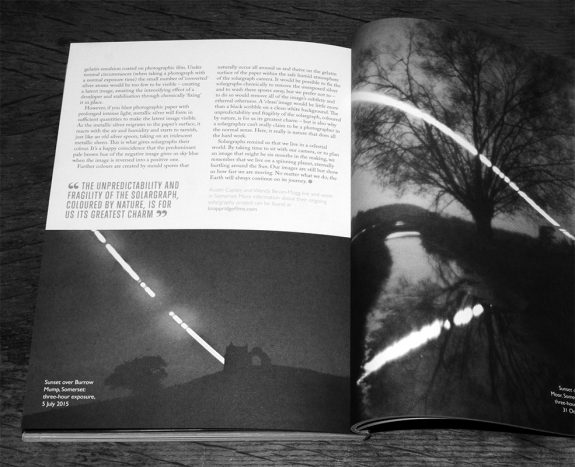