There was a noticeable strand of American science fiction and horror cinema in the 1980s that revisited the 1950s; sometimes in an escapist manner such as in Back to the Future, various remakes including The Thing, The Fly, The Blob and Invaders from Mars and at times in a more subtle or oblique way such as John Carpenter’s Christine.

Strange Invaders (1983) was part of this strand:

“Michael Laughlin directs… an affectionate homage to science fiction/alien takeover films of the 1950s that stars Paul  Le Mat as a university professor searching for his ex-wife, who seems to have disappeared while visiting her hometown of Centreville, Illinois. In fact, the place turns out to be a hotbed of aliens, in place since the Fifties and weirdly unaware of how the outside world has changed.” (From the Twilight Time limited edition Blu-ray release.)

The film opens with the following text:

“It was a simple time, of Eisenhower, twin beds and Elvis from the waist up – a safe, quiet moment in history. As a matter of fact, except for the Communists and Rock-and-Roll, there was not much to fear. Not much at all… until that night.”

That text both vividly portrays and underplays a sense of 1950s societal conformity and also the unreality of the related mindset/viewpoint; this was a time when the Cold War between East and West was just beginning to heat up, bringing with it the threat of apocalyptic destruction and the scarring memories of the Second World War were still very near. Perhaps that such things were in the nation’s psyche is why “a safe, quiet moment in history” was needed.

In Centreville, the very name of which conjures up images of sedate and well-behaved Mid Western America, the aliens have taken over the bodies of the town’s inhabitants. Perhaps they too identified and needed the comfortable conformity of the 1950s so that they were able to go about their business without interference.

Centreville is shown to be a typical rural small town day-to-day idyll; during the opening scene the camera travels over a pretty flower bed and then switches to views of populuxe-esque cars and there is a sense of the affluence  of the 1950s and the related flourishing of consumerism, as the townsfolk watch television, eat popcorn and drink coca cola while teenagers chew gum and make out in the car to a soundtrack of gentle rock’n’roll music.

Paul Le Mat’s character Charles Bigelow teaches about insects at university, telling his students in a manner that becomes prescient for his own experiences when he meets the Centreville aliens that “We’re going to meet some creatures that do things you never dreamed were possible” and he goes on to say that after the course they will realise man is just one race in the universe.

When he travels to Centreville to find his missing wife it is not just the bodies the aliens inhabit which appear to have not aged; stylistically their clothes and indeed the whole town’s way of life appears to have been caught in a 1950s time warp, creating a form of living museum and strangely, as by this point it is almost 30 years since their takeover, none of their clothes or other items in the town appear worn. Is this a side effect of some alien power that we are not told about or are they secretly manufacturing simulacra period items?

Bigelow is chased out-of-town by alien powers and he realises that something strange is going on in Centreville; he returns to the city, which to the viewer in its contemporary built-up and busy nature now appears almost more alien than anything in Centreville and visits the National Center for U.F.O. Studies to report his findings. This is a government-run organisation and seems to be curiously easily accessible to the general public, while also having military guards.

When the aliens come to track him down their 1950s style does not look out-of-place in the 1980s city, which possibly reflects fashion of the time and also the seemingly endlessly enduring nature of 1950s style and revivals of it. English actress Fiona Lewis plays an alien and calls on a journalist who Bigalow has approached about the odd goings on in Centreville; she pretends she is an Avon sales rep (a form of from home/local community perfume and makeup retail) and the journalist does not look askance at her 1950s image and just asks if she is in a New Wave band.

Although not a remake at the time of Strange Invaders’ making there was a heightened tension and conflict between East and West – as there also was in the post-War 1950s when the originals of the earlier mentioned The Blob, Invaders from Mars etc were made – and so in making a film that reflects on an earlier time of tension and paranoia it might be expected that it would contain expressions of then contemporary takes on such things and for the central character to be suitably threatened and distressed by events. 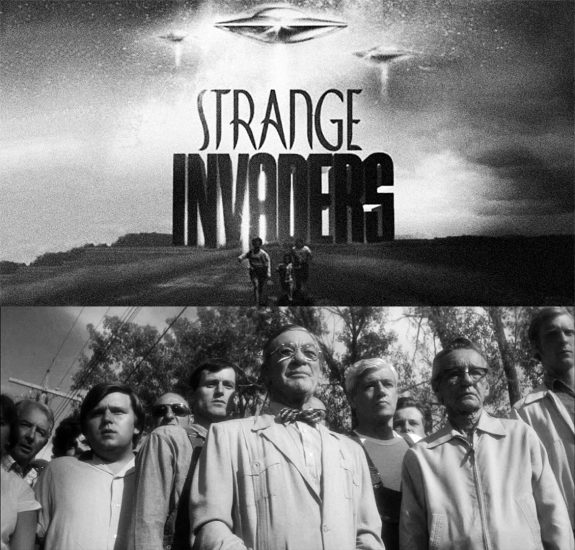 However, despite his dog apparently being unexplainedly spirited away in Centreville and various far from normal goings on there Bigelow appears curiously unconcerned about things; he begins attempting to solve the mystery with the air of a man who is just slightly irked rather than one who had his car blown up by some kind of alien activity.

To a degree this reflects the tone of the film in general; it takes the American 1950s Red/Communist scare that was translated in science fiction cinema as alien invasion/takeover and transposes it into a less threatening form, creating a film that while still intended for adults also has a family viewing feel to it. It could be seen as a more gentle, less threatening version of Invasion of the Bodysnatchers (1978) – a film in which aliens destroy humans bodies as they replicate their physical form and which contains a particularly paranoid atmosphere. While the aliens’ actions in Strange Invaders are predatory and even violent there is still an air of well-meaning benevolence to them rather than out-and-out menace.

Perhaps in this sense Strange Invaders could be seen as an examination of worries about a more subtle form of takeover and invasion present in both the 1950s and 1980s:

“There is a book to be written about how America in the 1980s, in the thick of a deregulated corporate boom, might have inspired a few of its filmmakers to remake certain horror movies of the 1950s that reflected a past society similarly gripped by anxious, consumptive conformity. The wave of 1950s-era horror remakes that were released in the 1980s might constitute a prolonged coincidence, but it is a revealing one, as the films of both decades are informed by an understandable distrust of the sacrifices of personality that are necessary to yielding the insidiously comfy fruits of suburbia.” Chuck Bowen, writing for Slant Magazine

Ultimately the aliens and possibly therefore their invasive actions and keeping their host bodies in a state of comfortable 1950s lifestyle, are shown to be not all that bad as they “free” the sentiences of the humans whose bodies they have taken over, who then return to their own bodies (although it is not made clear what happens to the humans when one of the aliens has torn off their human outer shell, apparently irrepairably destroying it as they do so).

The aliens are depicted as nearer to that classic cinema trope – the close-knit small town rural community that does not welcome or accept newcomers and outsiders easily.

Despite being a science fiction alien takeover film Strange Invaders is not an action packed extravaganza and the film appears to have been made in a very laid back manner, almost as though both the humans and film makers are not really all that bothered about how things turn out. Ultimately, as Julie Kirgo writes in the above mentioned Twilight Time Blu-ray release: “It’s all very silly… and very satisfying.”