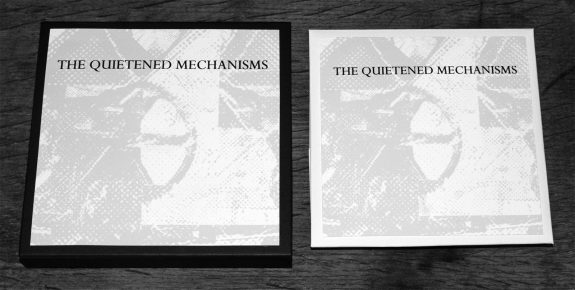 A selection of reviews, broadcasts etc of The Quietened Mechanisms album:

“The theme of the new collection is the end of Britain’s industrial revolution, a period of social and geological turmoil whose ruins still litter the landscape, especially in the Midlands and North of England. This isn’t industrial nostalgia… but an often poignant commemoration. Another impressive installment in this ongoing series.” John Coulthart, Feuilleton

“As ever impeccably packaged… . As with previous editions, these as were, epitaphs or nostalgia notations, uncover in the main, forgotten histories, whether forgotten through sheer neglect, conspiracy or misremembered, these moments or passages in time are locked in our fading subconscious much like fleeting apparitions or images disappearing over time whether by design or by way of a past rewritten. The quietened Mechanisms turns its scholarly gaze on forgotten technologies and with it hosts of gathering of 17 intrepid travelers along for the journey.” Mark Losing, The Sunday Experience

“A soaring soundbite of seismic and sensory sounds, this is one of the most arresting A Year In The Country releases yet – and one of the best!… Through sounds of aural and dystopic unease, tape loops and keyboards introduce listeners to the buzzing and humming an industrial factory makes. Drum patterns pedal over growls and loops tick time through the waves of weary wordless wages.” Eoghan Lyng, We Are Cult

“This volume explores abandoned, mostly derelict and long forgotten mills, factories and other infrastructure and paraphernalia of our industrial past, much of it slowly reclaimed by nature… Listening Centre’s Clarion Of The Collapsed Complex is really quite beautiful… a synthesized folk valediction to the rise and fall of industrialisation and all its human and structural collateral damage.” Ian Fraser, Terrascope

“Seventeen artists place themselves in the shadow of what remains, choosing sites that may not lay on the tourist maps, but await the explorer regardless… It’s an incredibly evocative experience, listening to this album.” Dave Thompson, Goldmine

“A Year In The Country and a selection of their regular musical contributors here turn their attention to abandoned factories and technology, spending an enraptured hour or so wandering among their ghosts… each track reflects a specific location, combining field recordings, musique concrete and spooked electronica into a strangely transporting whole.” Ben Graham, Shindig! magazine, issue 84

And then on to a selection of the radio etc broadcasts:

Tracks from the album including Listening Center’s Clarion of the Collapsed Complex were featured on Flatland Frequencies. Originally broadcast on Future Radio FM, the episode is archived at Mixcloud.

And another broadcast of Listening Center’s Clarion of the Collapsed Complex on Pull the Plug. Originally broadcast on Resonance FM, the show is archived here.

Howlround’s A Closed Circuit was featured on Evening of Light’s Ἀρέθουσα’s Elysian Dreams #02 podcast (alongside David Colohan’s How We’ll Go Out from The Shildam Hall Tapes). Visit that here.

A tip of the hat to all concerned. Much appreciated.

The Quietened Mechanisms is an exploration of abandoned and derelict industry, infrastructure, technology and equipment that once upon a time helped to create, connect and sustain society.

More details can be viewed here.