Remaking a much-loved and cult classic seems like a tricky path to choose in cinema and to a degree television drama: the film/programme you are making will often have a certain pre-existing recognition factor but that is also a double-edged sword as you are essentially pitting yourself against, well, the love of and for a cult classic.

Along which lines it is also a potentially odd and tricky thing for a director to do to attempt to make a semi “in the spirit of” sequel to his own much-loved cult classic (see The Wicker Tree).

Along which lines, three such films and programmes which have been remade that I have previously written about at A Year In The Country are The Wicker Man, The Village of the Damned and Edge of Darkness.

Now, although I thought it was an odd thing to do, to attempt to remake The Wicker Man, I tried to go into watching the 2006 version with an open mind and without being overly prejudiced against it – as a cultural behemoth the original version of The Wicker Man casts a long and imposing shadow.

It’s a fair while ago since I watched the remake and despite my trepidation in watching it, one of the main things that struck me was rather than thinking it was inherently bad, that it was essentially just another film, almost workmanlike, in contrast to the fantastical/fantasia like multi-layered cultural and aesthetic aspects of the original.

(The original film version of The Wicker Man’s troubled and intriguing production and release history has also come to be fairly inherently intertwined with those cultural aspects – adding a further layering which makes it shadow all the longer and more imposing on any remake.)

All of which brings me to the 2010 film adaptation/remake of Edge of Darkness.

It seems like both a tricky and odd path for a director to remake his own much-loved, not so much cult but widely and critically acclaimed classic but that is what Martin Campbell did (he also directed the 1985 television original).

For myself the original of Edge of Darkness is so rooted in my psyche and also the time, place and historical context of when it was made that I think I am too wary to watch the remake removed from that context and to possibly dispel my appreciation of the original, even out of curiousity about what the remake is like.

(There was also a British made sequel to The Village of the Damned made in 1964 called Children of the Damned.)

John Carpenter is known for holding British science fiction/fantasy writer Nigel Kneale in high regard (as I have mentioned before, in homage to Nigel Kneales’s Work, his Prince of Darkness film is credited to Martin Quatermass and he commissioned Kneale to work on the script for Halloween III which John Carpenter co-produced and co-scored) and it’s not much of a jump from Nigel Kneale’s intelligent take on British science fiction etc to John Wyndham’s. 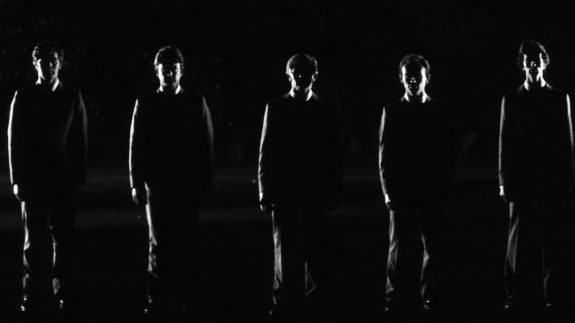 (Although not directed by the same person, the above still from Village of the Damned shares something of a similarity or two with the below still from Halloween III and both have a somewhat classic John Carpenter-esque “empty/isolated streets” dread.)

The 1995 remake of Village of the Damned is an odd film texturally: it has the look and feel of a made-for-television movie, although it had a budget of $22 million (approximately $36 million today allowing for inflation), which is hardly small change.

That look and feel may be in part due to the period aesthetics of when it was made, related film stock and/or the DVD transfer process.

It could also possibly be a side effect of the way in which when viewed now 1990s and turn of the millennium film and television can have a sense of not yet being old enough to have gained a retro fetishistic aspect, more just still rooted to the period of its production and a little out of step with modern tastes and expectations.

In this remake the story is moved from the English countryside to a smallish Northern Californian American town.

While the village in the 1960 version is peopled largely by the middle classes with terrribly good diction, alongside working class and labourer types, in John Carpenter’s version at the start the town seems to be largely populated by male hunks and styled female blondes.

The government/authorities’ response to essentially the town’s women being impregnated by a possibly alien race seems curiously unofficial/ramshackle – particularly viewed today in an era of heightened security measures.

Here the problem seems to be tackled by say the kind of grungey, underfunded, self-directed groups or organisations that would perhaps be found in David Cronenberg’s Videodrome.

As I have mentioned before sections of John Carpenter’s work, particularly his earlier films in the 1970s and during parts of the 1980s, contained a kind of ragged, tight, almost street energy to them, a possibly more fun, less arthouse parallel to David Cronenberg’s earlier films.

There is still some kind of left-of-centre cinema feel to this version of Village of the Damned and elements of that tighness or energy but it feels less focused or to not have quite the same energy of some of his other work:

“I’m really not passionate about Village of the Damned. I was getting rid of a contractual assignment, although I will say that it has a very good performance from Christopher Reeve, so there’s some value in it.” (John Carpenter in an interview at Vulture website.)

Possibly that lack of a sense of lean example of cinema could also be a result of the translation and remaking of an earlier piece of work and the way in which during that process some of the original energy or “magic”, that indefinable something can sometimes be lost along the way.

However, as I say, it’s a tricky proposition attempting to remake a much loved cult classic and the creators of the new version may well find themselves treading on what some may consider culturally hallowed ground. Taking on such a task could be considered something of a double edged sword in many ways; you have the pre-existing recognition factor and possibly proven appeal of the story etc of the earlier version but then there are also a whole host of expectations and comparing with its forebear to contend with.