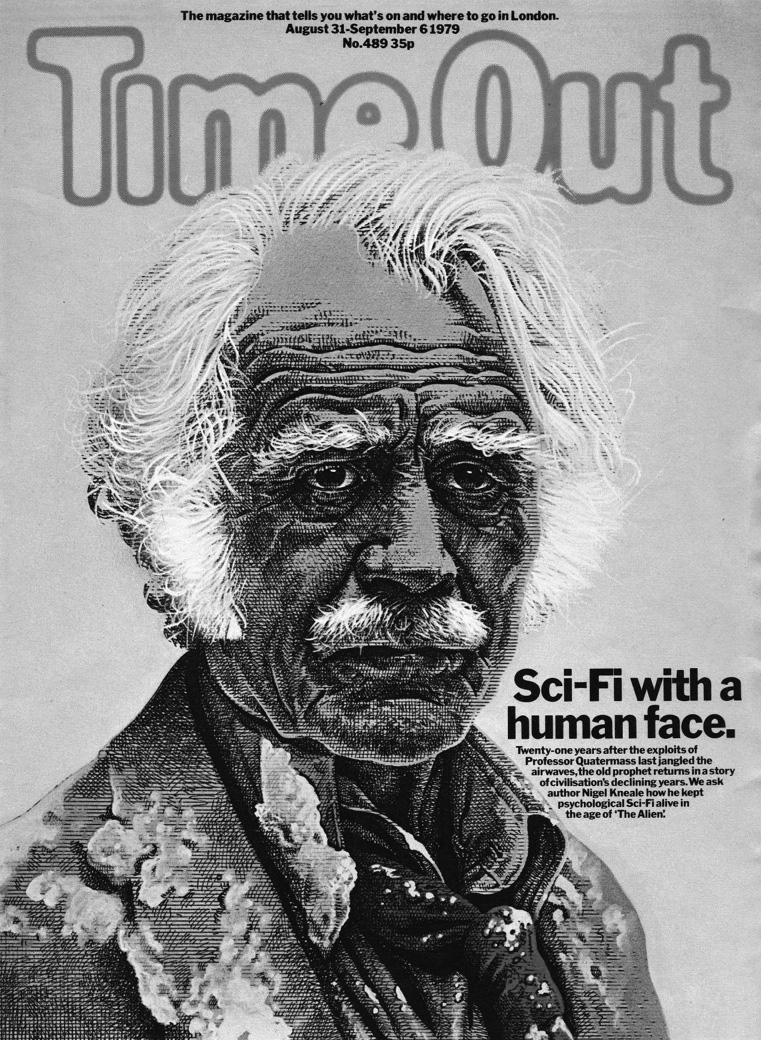 Well, these were something of a treat to find.

Now, as I may well have said around these parts before, once upon a time there weren’t necessarily all that many accompanying pieces of memorabilia and ephemera for films and TV. Which is in contrast to today where I expect you could well have a full time job keeping up with the output of such things for just one or two popular series or films.

With that in mind, coming across anything related to the final 1979 Quatermass series feels like a very fine find as there’s something of a paucity of related items or printed artifacts from back when.

Now, to my mind the above portrait / cover of Time Out should hang in national galleries. I find it beautiful and entrancing, ancient and modern – it captures the tired and world weary sense of Professor Quatermass in these later years paticularly well, with the subtle scan lines quietly adding to the whole thing just so.

(If you should not know by the way Time Out is a weekly London listings magazine.) 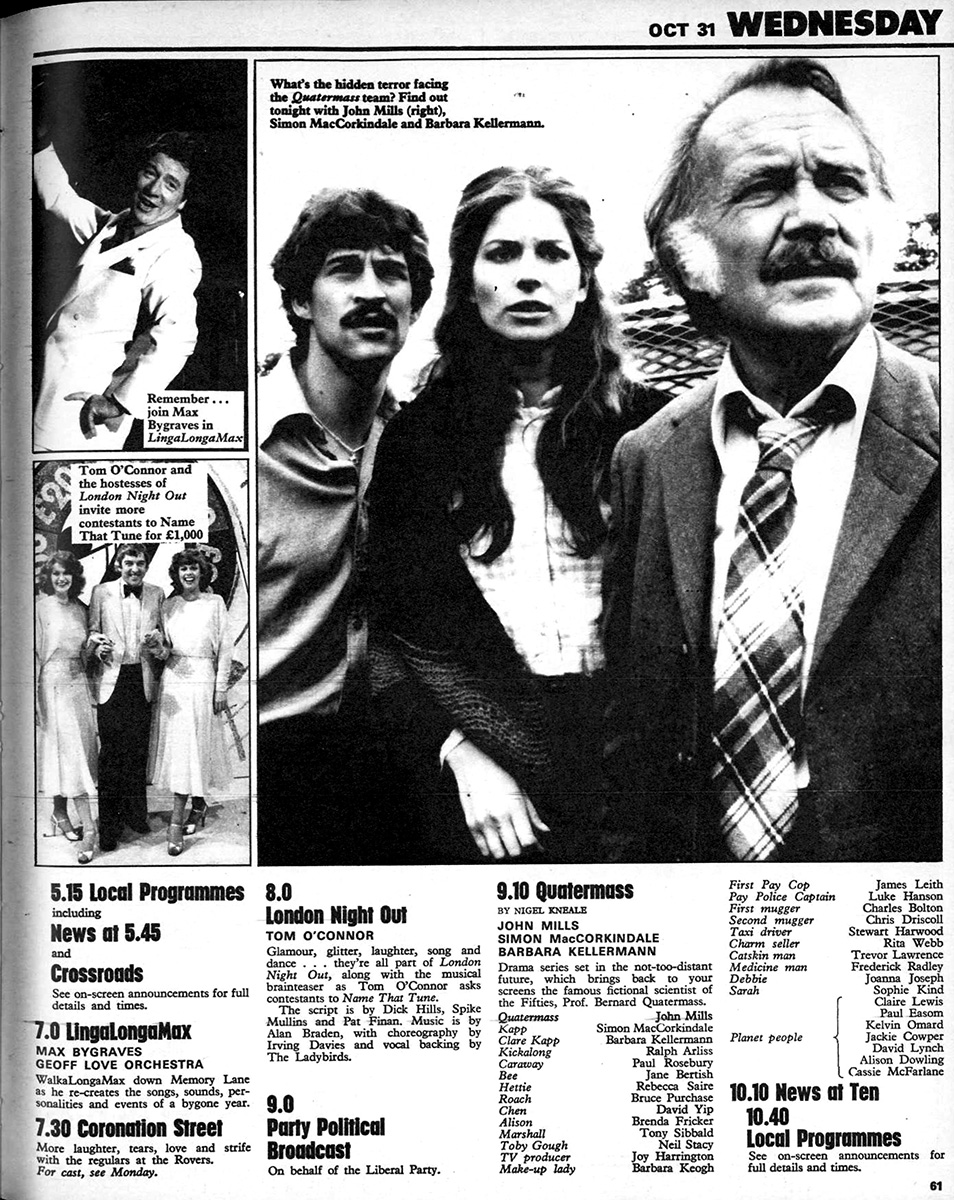 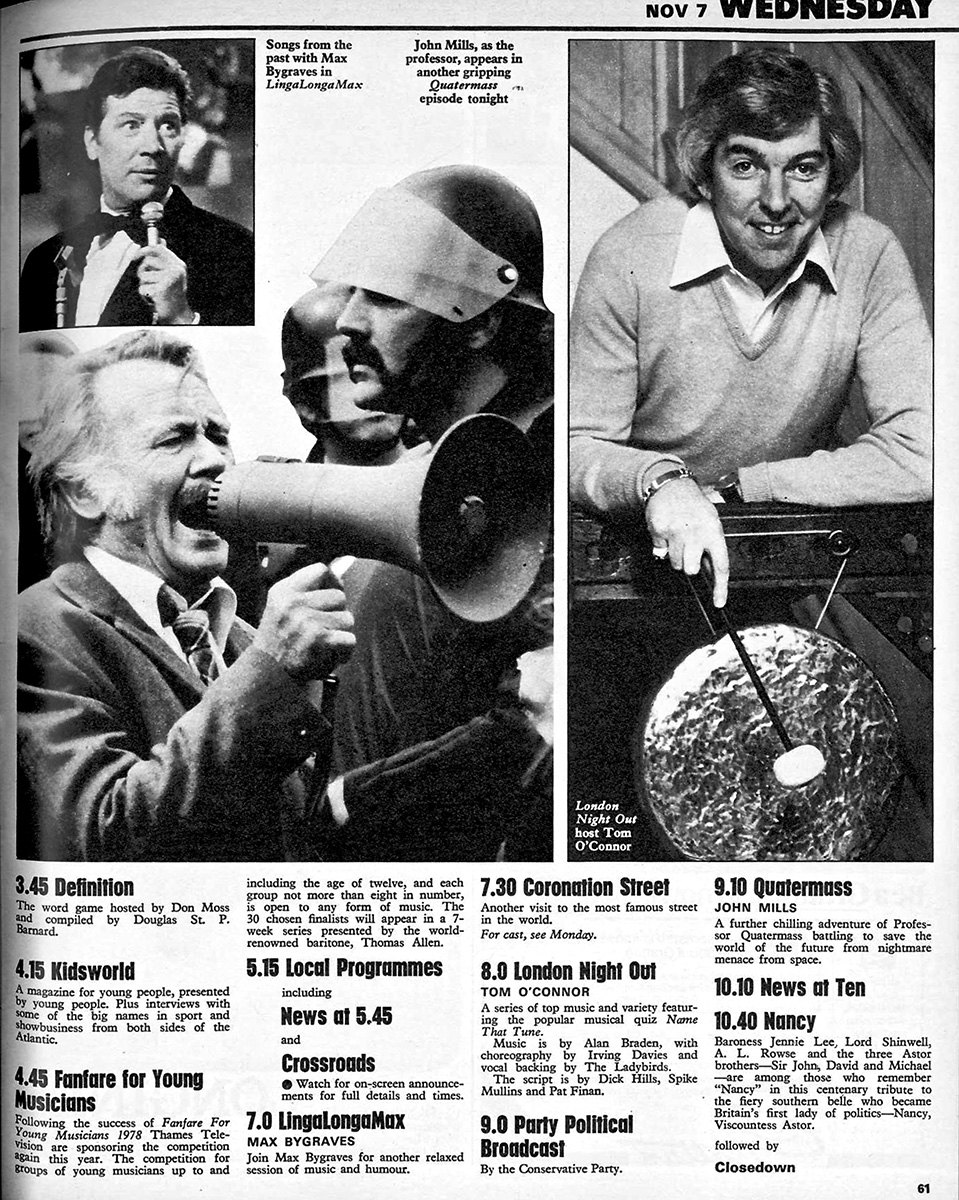 And then we get to the original schedule listings in the TV Times. I know that dystopic or threatening fiction / fantasy / science fiction can be quite a common thing among more overtly light entertainment but thinking of watching Quatermass after LingaLonging with Max Bygraves or Name-ing That Tune with Tom O’Connor seems just odd.

I suspect that’s in part because Mr Kneale’s work is more layered than much of similar more purely entertainment fare and also it’s hard to cast back and remove the subsequent weight of cultural, cult and hauntological associations  of/with Quatermass and other tales written by him and to think of his work as mainstream, prime time broadcasts.

(As an aside and another “if you should not know”, the TV Times is a weekly magazine that lists the broadcast schedule for that week – back then there were only three television channels in the UK, so I suspect it was a little less packed with information than today. Those just three channels, there being less entertainment media in general and the prime time position of Quatermass means that I suspect a sizeable percentage of the population tuned in, running into the many millions.) 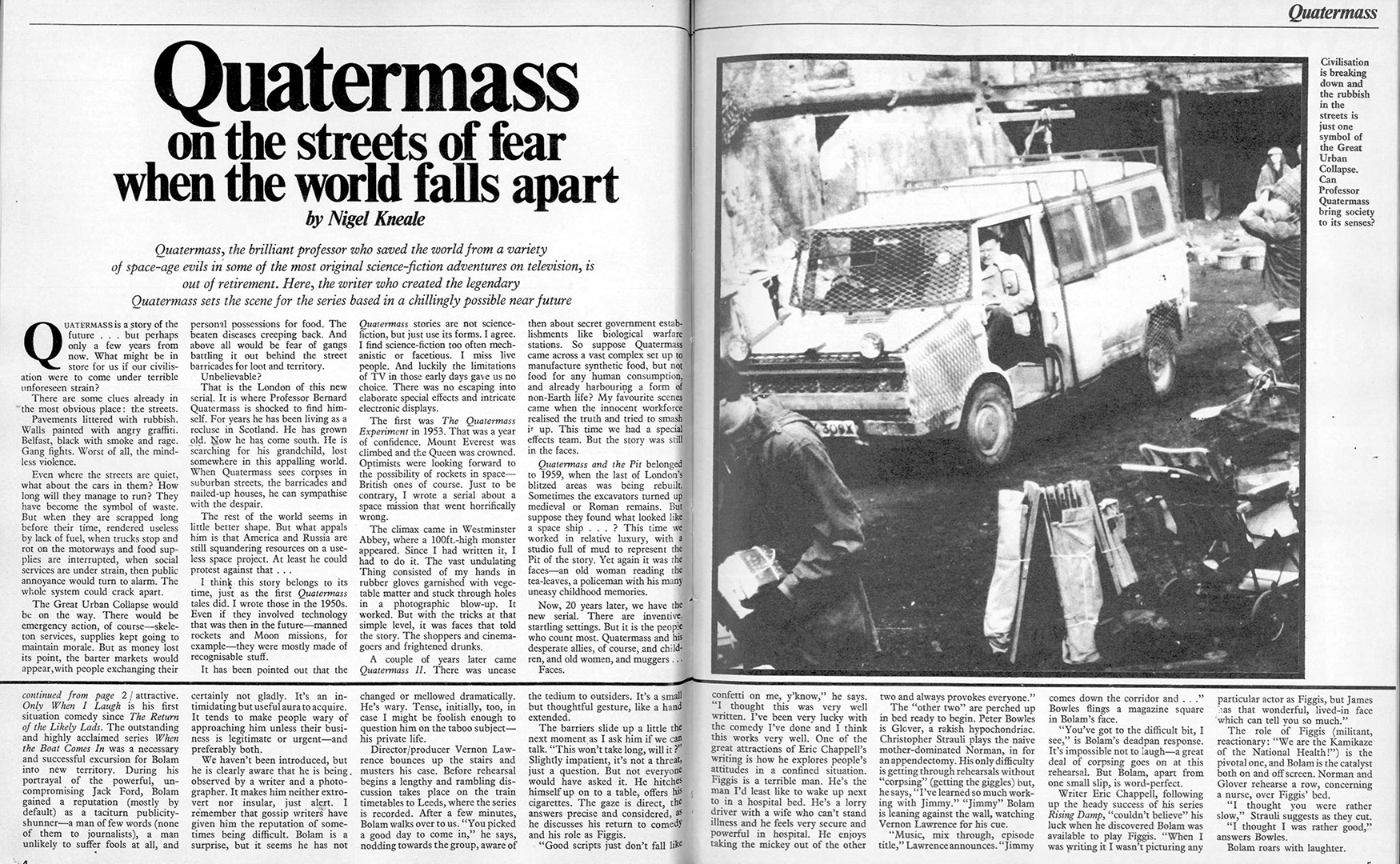 And finally, another TV Times clipping, where Mr Kneale talks about both this series and previous Quatermass outings.

It’s interesting to hear from the horses mouth, as it were, the ways in which the various Quatermasses were connected to and intended to reflect their times, with the 1979 series being an extreme, possibly pessimistic, take and extrapolation on the then worries of a Britain which had been experiencing an extended period of social / political / economic malaise, strife and conflict.

Which makes the Party Political Broadcasts just before Quatermass seem quite apposite and almost too perfectly placed; I can but imagine what the more, shall we say starboard leaning, broadcast was like and / or its themes; “It’s all gone to pot, vote for us or you’re all doomed!”.

I came across the clippings courtesy of Mr Peter Fuller here and here, the Time Out cover via Mr Kim Newman here. Thanks and a tip of the hat to both.

Quatermass has (relatively) recently had a brush and scrub up. Visit that here.

Previous huff-ity puff-ity ringstone round wanderings around these parts can be visited here.