A gathering of some of the reviews, broadcasts etc of the All The Merry Year Round album: 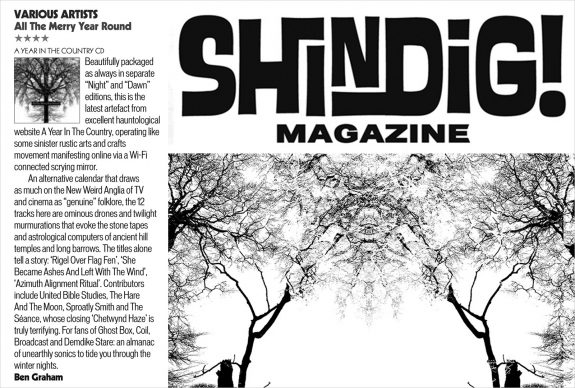 Ben Graham has reviewed the album for issue 74 of Shindig! magazine:

“A Year In The Country… operating like some sinister rustic arts and crafts movement manifesting online via a Wi-Fi connected scrying mirror… an almanac of unearthly sonics to tide you through the winter nights.”

Issue 74 will be available here soon.

Richard Allen has reviewed the album at A Closer Listen:

“All the Merry Year Round creates an atmosphere for wandering and wondering. The set succeeds through counter intuition, its alternative calendar creating such a ruckus that it causes all calendars to blow away in the wind, leaving us only with the eternal, visceral now.”

Andrew Young has reviewed the album at Terrascope:

Mark Barton has written about All The Merry Year Round twice at his The Sunday Experience site:

“”I’ll Bid My Heart Be Still”… blessed with a church like serene, both reverent and majestic, a stilled grandeur forms from the spectral touching, a magical occurrence intimately brushed and in tune with the coming dark season, a ghostly ceremonial séance reaching deep through the ages instilling all in enchantment and beautified bewitchment.”

More Than Human played Polypores and Time Attendant’s tracks on the intriguing selecting and wanderings of their radio show.

Originally broadcast on CiTR FM, it can be visited here and the show is archived at their Soundcloud page here and is available as a podcast here.

And amongst further intriguing wanderings and selectings, Cosmic Neighbourhood’s track was played on The deXter Bentley Hello GoodBye Show.

Originally broadcast on Resonance FM, the playlist can be viewed here and the show is archived here.

The Unquiet Meadow played The Hare And The Moon with Jo Lepine’s “I’ll Bid My Heart Be Still” amongst their wanderings through “psych-tinged landscapes of mutated folk & haunted electronica” on their radio show.

Originally broadcast on Asheville FM, the playlist can be visited here.

Tip of the hat to everybody involved in the above…

All The Merry Year Round is an exploration of an alternative or otherly calendar that considers how traditional folklore and its tales now sit alongside and sometimes intertwine with cultural or media based folklore; stories we discover, treasure, are informed and inspired by but which are found, transmitted and passed down via television, film and technology rather than through local history and the ritual celebrations of the more longstanding folkloric calendar… travelling alongside straw bear and cathode ray summonings alike.

More details can be found here and the album can be previewed here.