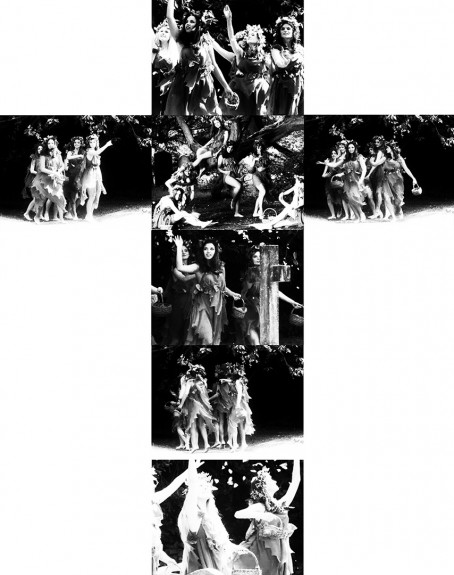 File under: Trails and Influences. Other Pathways. Case #44/52.

I have a mild soft-spot for the turn of the millennium remake of Randall and Hopkirk (deceased), chaired by Charlie Higson, starring Vic Reeves, Bob Mortimer, Emilia Fox and a gloriously white-haired Tom Baker.

It is a series which concerns itself with a still living private investigator who is visited/helped/hindered by the white-suited ghost of his former partner (the deceased of the title) and isn’t a million miles away from the likes of say Doctor Who in its mixing of fantasy and science fiction in a mainstream setting.

And yes, it’s cheesy. Yes, it has that curiously dated appearance that cultural work from the 90s and around then currently has… not yet old enough to have gained a patina of retro fetishistic kitsch, not quite modern enough to fit with current tastes… yes, Vic Reeves and Bob Mortimer’s acting isn’t necessarily going to be having Sir turning in his grave but…

…it’s good knockabout fun. Nothing too challenging but it often shows a great love for a whole slew of fantasy, crime horror and science fiction films, television literature etc from years gone by.

The episode Man Of Substance in particular, which seems to predate Edgar Wright/Simon Pegg’s Hot Fuzz in a number of its themes, borrowings and the story of a sleepy country idyll gone bad by a year or few…

…before it wanders off to a classic chocolate box English idyll of a village… all tea rooms, commemorative tea towels, an avuncular British bobby on the beat (who appears to be the living incarnation of a laughing policeman you might have chuckle for 20p at the seaside); a neat, quiet and tidy piece of heritage real estate.

But… well, not so surprisingly things aren’t quite what they seem (spoiler alert about now)…

The village has a dark secret or two and quite quickly turns more than a little Belbury/Hot Fuzz like; something is not quite right in this particular chocolate box.

Essentially its population have been trapped inbetween life and death, unable to leave the village since the days that a pestilence had cleared a considerable percentage of the English population a number of centuries previously.

I guess we should have known something wasn’t quite right when we passed that monument earlier on the way into the village that looked as though it should have been on the cover of one of the John Barleycorn Reborn Dark Britannica albums (see Day #248/365).

Along the way towards the almost taking over the world shennanigans that the villagers get up to, the episodes wanders into the territory of/borrows from;

The Wickerman… petal scattering woodland nymphs dance through the churchyard… 1970-ish British horror portmanteau films such as The Monster Club and its “you’re never going to escape from the village” theme… medievalistic fetishistic pleasures by way of Curse Of The Crimson Altar… a touch of Hansel and Gretel and the fattening up of the chose calfs… the somewhat unpleasant punishments of the incarcerated via The Witchfinder General (or it’s less well-known brethren The Bloody Judge)… maybe even a touch of Penda’s Fen and its sense of the mythic/mystical in the landscape and returning kings… and back to The Wickerman, as the fool becomes the king for the day (and eternity) during a local festival  in service of the communities ends and a pyre is made for a sacrifical burning…

…and just having Tom Baker, possibly still the archetypal Doctor Who, in amongst it all makes it fundamentally interconnected in the minds of watchers of a certain vintage with certain culture and tropes. Oh and that’s before we get to Gareth Thomas, one Federation fighting Blake’s 7 leader as a real ale pushing pub landlord who later turns out in his festival garb only to be revealed as a centuries old medieval lord of the manor…

At the time of its transmission the revivification of all things Wicker Man and folk-horror-ish had not yet fully gained pace and yet here are many of its themes and interests looked to for peak viewing entertainment.

(Just prior to Randall & Hopkirk’s broadcast the The Wickerman soundtrack had been first sent out into the world in 1998 on its own via the efforts and investigating of Jonny Trunk and Trunk Records, which has been thought to have been one of the sparks that reignited that particular conflagration of interest but the number of different references to fantastic fictions from before it suggest a knowledge, interest and love of such things that stretches back some way… Randall & Hopkirk isn’t as dark but thinking back this episode may have shared some ground with the similar time period’s The League Of Gentleman and its mixing of horror and comedy in a rural setting gone bad where “You bain’t be from round here” is the general refrain).

So, borrowings from Albion in the overgrowth… as a TV episode this is a guilty pleasure but a pleasure nonetheless.

A previous glimpse of Albion in the overgrowth at Day #146/365, in the good company of pop-psych-folk courtesy of Stealing Sheep.

Some background information on Randall & Hopkirk (deceased) via the electronic pages of the world’s current Encyclopedia Britannica-And-All-Else here.

That from which it borrows: The Wickerman – the future lost vessels and artifacts of modern folklore at Day #90/365.