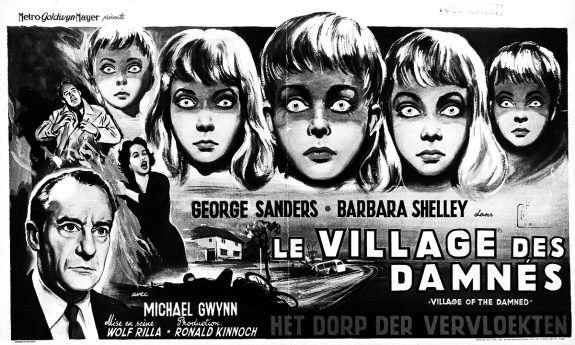 I was watching The Village Of The Damned and it seemed like the perfect summing up of one of the themes of A Year In The Country: an imagined sense of an underlying unsettledness to country idylls, of something having gone wrong and rotten amongst the hills, valleys and sleepy little high streets of this green and pleasant land. 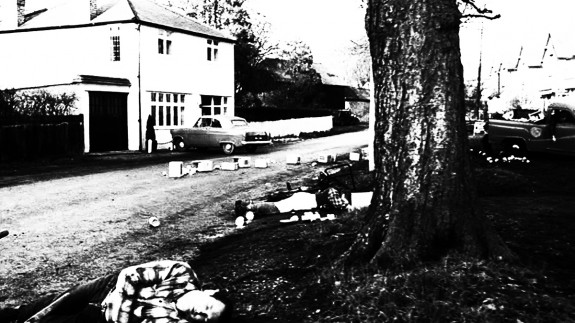 So, the film: a quick precis of the plot; a typical English village suddenly finds all its inhabitants have passed out and anybody who tries to enter the village or its surrounding lands also loses consciousness. The army and authorities are called in to try and find out what’s going on. The villagers awake apparently unharmed and it would appear life can go on more or less as normal in these bucolic surrounds but months later all the child-bearing age women find themselves unexplainedly pregnant. When born, these children all have similar piercing eyes, striking hair, advanced intelligence, powers of mind reading/control and possess a hive mind where if one of them learns something they all do. They are truly the cuckoos in the nest and their powers, possible amorality and drive to survive threatens the villages way of life, lives and possibly mankind’s rule and existence.

It is a film full of iconic imagery, nearly every scene arriving with at least one more: the early collapse into unconsciousness of that most British symbol of pastoral civility, the bobby on a bicycle, via nighttime mobs with burning torches and the children themselves with their emotional detachment, silver hair and glowing eyes. 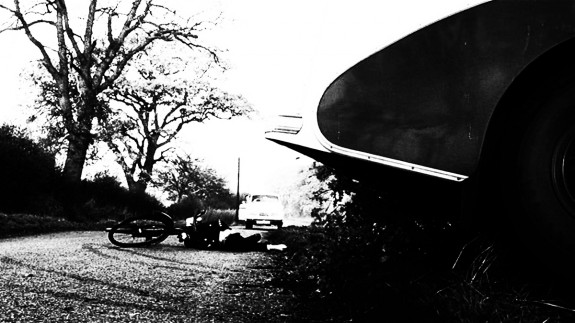 In many ways it could be seen to be the flipside or even accompaniment to the film version of Quatermass and The Pit: that film is a post second world war consideration of the battle for genetic superiority/purity/control as experienced in the still recent historic conflict. In The Village Of The Damned an amoral, Aryan  race are seeded amongst the population, determined to survive and colonise whatever the cost. 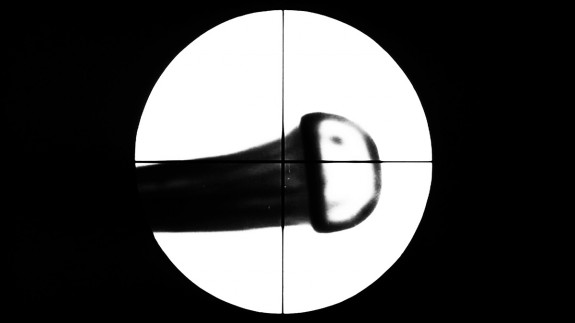 There’s more than a touch of horror fictions previous and future to the film: shades of Frankenstein when the villagers take it upon themselves to form the aforementioned burning torch bearing mob in order to rid themselves of this technologically biologically advanced new life form and later The Omen, with its sense of a cold detached cuckoo in the nest, with telepathic/telekinetic powers beyond our ken or control and who will use those powers to despatch any threat or adversary.

One thing I found interesting was that the scenes set in the local village shop/post office look like a modern-day drama recreation of such things: it’s full of the now simplistic looking boxes and cans of food from that era, that I am so used to seeing in slightly over neat and tidy contemporary period drama productions that they don’t like they were real or ever truly existed.

This is a world that seems to only be populated by perfection diction upper middle-class figures of control and authority or the local pub drinking working class and it’s terribly, terribly white. Which was possibly indicative of how things actually were then but to the modern eye it’s such a set, defined and delineated society…

…and those upper middle classes seem to take it all curiously in their stride and apart from the very occasional emotional outburst (mostly from a female and rarely the educated males) don’t get too het up about the fact that they have essentially given birth to and are being threatened by some unexplained, actually very other biological force. It is generally dealt with the same level of emotional alarm and froideur as if it was merely some socially rather unacceptable gaffe.

Although these cuckoos are essentially a hive mind or colony, their leader or more vocal spokesperson is played brilliantly by Martin Stephens, just the touch of a smile playing about his lips as he stares otherwise without emotion at his mother after sending someone to a fiery departure (he would appear to have been the go to young actor for such quietly unsettling preter-naturalness in the early 1960s as he also appears amongst the reeds and willows of The Innocents: see Day #106/365).

(Above the past tries to face off the future.)

And going back to the analogies with the recent(ish) historical conflict: the way the British or at least the social class with authority, deal with these invaders, these colonising cuckoos, is shown to be very decent in comparison to how the rest of the world might. Reason generally prevails and we are for talking, consideration, study and compromise: elsewhere there may well be brutality and the simple application of military force to deal with the problem.

The film is based on the novel The Midwich Cuckoos by John Wyndham, which I read when living in a tiny country village when really rather young, I suppose not to dissimilar to the setting of the book.

And in common with the book/film, although it was most definitely a country idyll, as I’ve mentioned elsewhere in these pages we were surrounded by symbols of a readiness or warnings against those who might be tempted to trespass on these lands; low flying planes flew overhead regularly, practising avoiding enemy radar, there were abandoned concrete pill box defences in the fields, unexploded military ordinance would be found from time to time and the disposal experts would have to be called in and there was a map in the local information centre which as youngsters we considered near mythological as it apparently showed where aeroplanes had crashed during wartime…

…oh and that’s before we get to the two ancient looking even then brown Bakelite boxes in and around my domestic home life that were nuclear air raid sirens (see the About page for more on that) or why my friend had a working Geiger counter (that also appeared to be from another earlier technological age, all valves and flickering needles) that was used as a toy. Why and wherefore did it come from? I’m not sure…