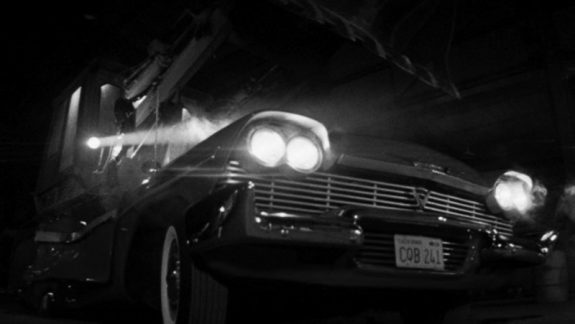 Although set in the late 1970s Christine in many ways appears to be nearer to what Graham Williamson on the website Geek Show has called “a kind of debased version of the sugar-sweet nostalgic sitcom Happy Days” (a popular television series set in the 1950s and broadcast from 1974-1984) particularly when two of the main teenage leads go to school and have to deal with flick knife wielding bullies. 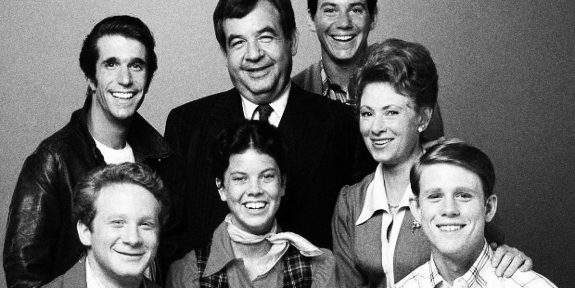 While not as overtly camp nor comedic, in this sense it could be seen as treading not all that dissimilar territory to John Water’s 1950s/early 1960s set films Cry-Baby (1990) and Hairspray (1988), which took some of the themes, tropes and aesthetics of earlier eras/rock’n’roll and filtered them through a period almost cartoon-ish and at times degenerate teenager and/or status quo baiting lens. 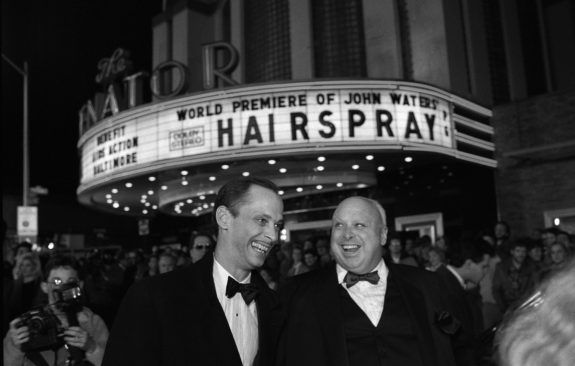 However in Hairspray although the teenage lead Tracy Turnblad horrifies and rebels against her parents and some of her schoolmates when she begins an interracial romance, overall she is shown to be a good citizen who is working towards social good and integration.

In Christine Arnie develops a more classic “Yeh, what y’gonna do about it?” defiant teenage stance in response to his parents’ wishes and attempts to control him; while more of a loner, this attitude along with his new 1950s-esque bad-boy style and swagger has him heading towards the outsider rebel rock’n’roll-isms of Johnny Depp’s gang of “drapes” in Cry-Baby.

As part of this youthful rebellion in Christine cars are shown as being autonomous zones away from parental and societal influence, something which was effectively enabled by America’s affluence at the time. These are mobile spaces in which to strut your stuff, make your mark on the world and make out with your partner.

The sense of being at a remove from authority figures and 1950s period aspect of the film are also further shown by one of the key scenes in the film taking place at a drive-in cinema, a location which seems to inherently invoke a sense of a previous era. 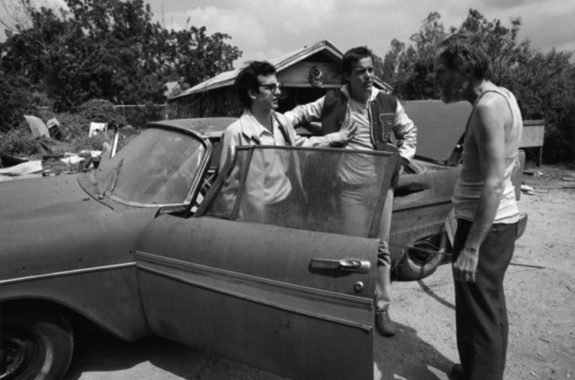 And although the film’s location takes place in an anonymous suburb there is a sense of it containing unregulated fringe areas and characters from the edge of society; Christine is bought from an older man who’s shack-like home in an overgrown patch of waste strewn scrubland and general grizzled demeanour could well have tumbled out of some mythological Southern State of America, while the garage in which Arnie repairs Christine seems to be an unregulated edgeland which is often only shown at night and ruled over by its owner who is played as a tobacco chewing, foul mouthed and unkempt, borderline grotesque character.

One aspect of Christine which seems in marked contrast to early 1980s trends within cinema is that Christine is almost the antithesis to the slasher movie; for the first hour or so of its running time the film is nearer to a coming of age film, with murder and mayhem, along with the supernatural aspects, taking a decided “backseat” and throughout the film there is very little gore or overtly graphic onscreen violence.

In this sense it sits alongside some of John Carpenter’s other earlier films such as The Fog (1980), which had a distinctly chilling atmosphere but created and sustained this without more obvious graphic visual scares and special effects. 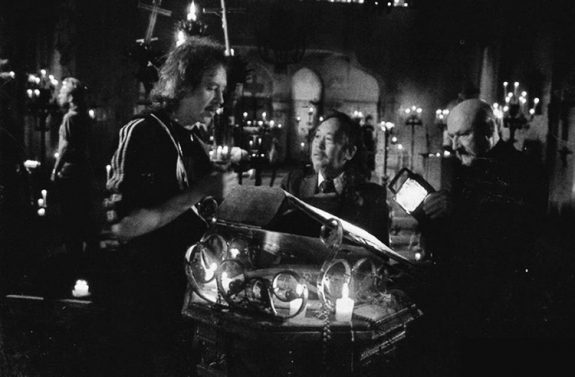 The pace, plotting and action in both films and also in the likes of his Prince of Darkness (1987) when compared to much of modern cinema tends to be relatively more slowly paced (although notedly without feeling like a “slow” viewing experience) allowing the viewer’s mind and imagination time to breathe and look around rather than bombarding them with endless action and a montage of edits/cuts in an attempt to keep the audience in a state of heightened stimulation and excitement.

Although marketed as a horror film, Christine is not all that horrifying or full of scares and has a warmth and a human quality to it which John Carpenter at his best has brought to his work. Rather than being purely a shock or spectacle orientated genre film it is at least equally an observation of the development and co-dependency of a relationship, one which takes the American love affair with the automobile to a heightened and ultimately destructive level:

“In a sense the picture is not a horror picture. It does not have a lot of gore. It doesn’t have a lot of scenes of obvious terror. It’s a little bit different. For a long time in the film nothing really happens to anybody. It’s a development of the relationship between Arnie and the car, Stockwell and so forth.” (John Carpenter talking about the film in Christine: Ignition, Fast and Furious & Finish Line, a three-part making of documentary from 2003.) 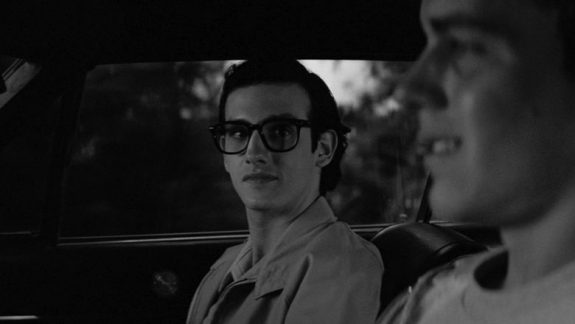 The character John Stockwell in the film is Arnie’s closest friend who initially attempts to protect his outsider/uncool schoolmate. Their relationship is a little unusual in the sense that it does not fit with American film tradition; John is a popular, good looking athlete, a “jock”, complete with an iconic letterman jacket. Arnie is the boy who has his lunch stolen by the bullies.

However, in a reversing of their normal social roles, for much of the film John is effectively neutered as he is bed bound in hospital due to a sporting iinjury, his football playing days over. As he recuperates Arnie’s power appears to grow, he becomes the (slightly unconvincing) cool one of the friends and begins to date the attractive new girl at school.

In this sense for a while Christine is almost a classic American teen film; the geek becomes the cool kid and gets the girl as the cool kid goes out of favour – although in contrast to much of such genre cinema the cool kid is portrayed as a good guy and more the victim of misfortune, rather than being the arrogant popular member of school society who gets his comeuppance.

Ultimately though the normal balance of power is restored; the uncool kid who has risen up through being corrupted by the supernatural powers of his car has become arrogant and swollen by his power. He looses his sense of normalcy and decency and this in part leads to his demise, while the neutered “jock” cool kid eventually rises again; his actions are aimed at stopping the car’s murderous impulses and its sway on his friend. However although he does not know how complicit Arnie is in the car’s violence, he is ultimately implicit in his friend’s demise as he and Arnie’s former girlfriend band together to bring down Christine in an almost climactic showdown in the garage where she was restored.

Although not made overly implicit there is a sense towards the end of the film that the naturally good looking and popular athletic friend is the one who will be left as the romantic partner with the good looking popular girl (i.e. Arnie’s once girlfriend). And so the natural order is finally restored. 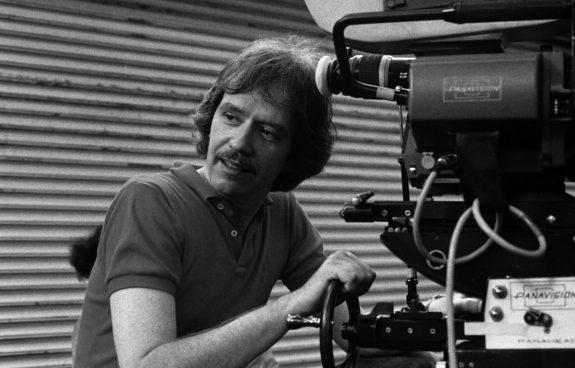 While the film has a slight workmanlike quality to it (John Carpenter took it on as a job of work after the commercially and critically negative reaction his previous film The Thing received on its release in 1982), as with the 1950s cars that feature so heavily in it Christine stands the test of time rather well. This may in part be due to the way in which it deals with universal themes such as love, jealousy, ugliness, beauty, rites of passage and so forth.

Accompanying which the special effects are still impressive today; when Christine restores herself and literally pushes back out her dented bodywork this was done in a real world manner using pneumatics and so forth and the end result are visuals that more than hold their own with modern-day CGI. That the effects were carried out by apparently just ten people, as shown in the credits, makes them all the more impressive, particularly as today similar computer generated effects would probably require multi-columned credits of dozens of people.