I recently mentioned several books which to my knowledge are the main photographic orientated books which document British alternative/counter cultural outdoor festivals from the 1960s to 1980s: Jeremy Sandford and Ron Reid’s Tomorrow’s People (1974), Richard Barnes’ The Sun in the East – Norfolk & Suffolk Fairs (1983) and Sam Knee’s Memory of a Free Festival – The Golden Era of the British Underground Festival Scene (2017).

As I have previously mentioned, all three document and capture a time when outdoor festivals weren’t an accepted mainstream and/or commercial orientated activity.

Memory of a Free Festival is a beautifully produced book which is essentially a photographic collection of found, collected, donated and researched period photography which focuses on British free festivals from the early 1960s to around the mid-1980s.

(It also sits alongside three other photography orientated books Sam Knee has curated/edited – Untypical Girls which focuses on post-punk through grunge to riot grrrl alternative female style and music, A Scene In Between which documents what could loosely be called UK indie, anorak, shoegaze and bowlhead fashion, music and culture between 1980-1988 and the more all inclusive The Bag I’m In which gathers underground British music and fashion photography from 1960-1990.)

Something of an aside: Traveller in this instance does not refer to the traditional Romany traveller community, rather a loose grouping that grew in size during the 1980s, which is sometimes referred to as new age travellers. This variously took in often alternative, counter cultural, rural, nomadic and unconventional ways of life, coupled with an at times anti-authoritarian stance.

Crustie I use to loosely refer to a way of life/culture connected to that of the above form of travellers, although it was often more urban than rural nomadic orientated. There was a reasonable degree of crossover between the two groups in terms of political beliefs/stance, lifestyle and population and crustie also interlinks to a degree with the likes of anarcho-punk and the squatter movement.

As a phrase, crustie has often been used in a derogatory sense, although here I use it merely to denote a particular section of society. As phrases and notifiers of particular groupings, cultures and lifestyles both travellers and crusties are often, although not exclusively used to refer to such things in 1980s and 1990s.

Both travellers and crusties often shared an aesthetic which could be described as a punk-y, slightly biker, almost Mad Max post apocalyptic look, with one of its frequent signifiers or marks of identification being the adoption of dreadlocks. More on that and its evolution in a moment…

The photographs are presented in Sam Knee’s book chronologically and although to a degree it portrays the progression, intermingling and evolution of culture, there also seems to be a distinctive break between some of the pre-hippie, post-war jazz and beatnik aesthetics of the early 1960s festivals and the then upcoming more rock and hippie/psychedelic orientated festivals.

In the later 1970s and 1980s when punks start appearing in the festival photographs it also seems to mark a distinct sea change from the previous era’s more “peace and love” utopian aspects, bringing a harder edged aesthetic to the events. Although rather than a distinct schism, this could be seen as part of that just mentioned evolution and intermingling and also leading to the earlier mentioned anarcho-punk/crustie/traveller orientated festivals and their attendees, of which Sam Knee says:

“At this point, the punks and the hippies had become fused together in a mashup of counterculture featuring long hair, skinny jeans, activist patches, baggy knitted jumpers and army surplus gear. The two cults once considered worlds apart were in fact clearly cut from the same cloth.”

(Along which lines, this form of travellers being sometimes referred to as new age travellers appears to make more implicit their in part possibly hippie forebears or lineage.)

Although expressed in different ways, both the anarcho etc punk and hippy movements were at times involved in conflicts with authority, which often centred around choices, beliefs and freedoms concerning lifestyles, the right to gather and access to public land/monuments which often differed from mainstream norms, beliefs and sometimes legislation.

This differing and the resulting antangonisms/conflict lead to what has come to be known as the Battle of the Beanfield in 1985, which occurred after a High Court injunction which prohibited Stonehenge Free Festival taking place at the ancient standing stones was ignored by a convoy of travellers, with this convoy being stopped and broken up using extreme and heavy handed tactics by the authorities. 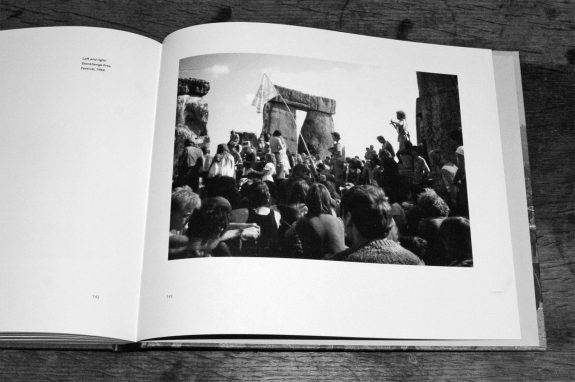 Legislation was then passed in 1986 which enabled the more rigorous policing/prevention of festivals and this is the point at which Sam Knee’s book draws to a close, with him considering it the sounding of the “death knell for the golden era of the great British festival scene”.

As I have mentioned before, Rob Young also writes extensively about 1960s-1980 British festivals in the Paradise Enclosed chapter in his book Electric Eden – Searching for Britain’s Visionary Music.

However, both Sam Knee’s book and the Paradise Enclosed chapter in Electric Eden largely draw a line at a similar point of time to mark the ending of outdoor gatherings/festivals as alternative, sometimes subversive, counter cultural, utopian etc forms of expression and experimentation.

Elsewhere at A Year In The Country:
1) Day #4/365: Electric Eden; a researching, unearthing and drawing of lines between the stories of Britain’s visionary music
2) Week #6/52: Tomorrow’s People, further considerations of the past as a foreign country and hauntology away from its more frequent signifiers and imagery…
3) Chapter 1 Book Images: Electric Eden – Unearthing Britain’s Visionary Music – Folk Vs Pop, Less Harvested Cultural Landscapes and Acts of Enclosure, Old and New
4) Wanderings, Explorations and Signposts 9/52: The Sun in the East – Norfolk & Suffolk Fairs and Albion Unenclosed