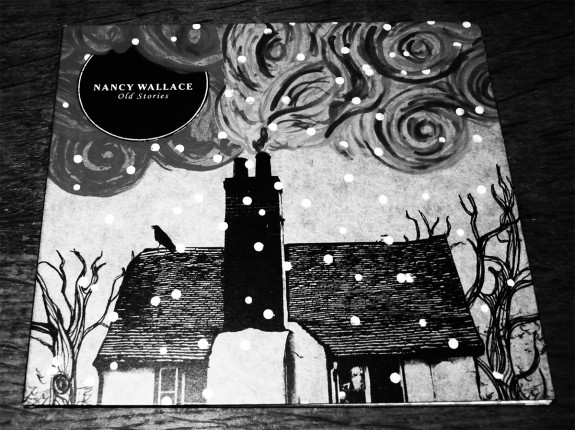 One of the songs that has stayed with me the most leading up to and throughout this year in the country is Nancy Wallace’s version of I Live Not Where I Love.

It’s a uplifting and yet also sadly moving traditional song, taken gently into other fields and next to hearths and hearts by Ms Wallace.

It appears on her Old Stories album, which was released by Midwich Records. I knew little or nothing about the music this record contained but had a curious urge to own it… and upon discovering this song I think I was given my reason why that was so.

The cover is by Dom Cooper, sometimes of The Owl Service and sometimes of The Straw Bear Band and features a country cottage that is billowing smoke… it could be heading towards twee Rocket Cottage-isms (see Day #252/365) but it sidesteps such things. There is just a hint of something unsettling to the image, a slight hint of the eerie to the trees that surround it but it is also curiously comforting as an image; an idyll without the sometimes twee associations and connotations of such things.

The song itself I’ve always tended to think of as a cover version of some relatively recent song, I’m not sure why, despite its traditional origins. I suppose the nearest to it being of more modern provenance is Tim Hart and Maddy Prior’s version on Summer Solstice (or later Steeleye Span’s performing of it)…

Whenever I hear Nancy Wallace’s version I always expect at some point an almost choral joining in by other voices, possibly in the style of The Owl Service’s also rather fine version of Willy O’Winsbury on View From A Hill (see Day #30/365) but the song wends its way with quiet restraint.

Listen to I Live Not Where I Love via the half-of-half-half-of a tuppence paying curiously legal often bootlegisms of a corporation here (ah, the respectability that money, convenience, lawyers and aquiescence can purchase).

Who’s afeard: visit the work of Dom Cooper around these parts at Day #170/365 and in the ether here.

Nancy Wallace’s work is also well worth a wander amongst… you will find her working independently and also alongside other reinterpreters and reimaginers of folk tradition such as The Memory Band, Sharron Kraus and The Owl Service.

Consider Ms Sharron Kraus’ lullabies for the land at Day #58/365.