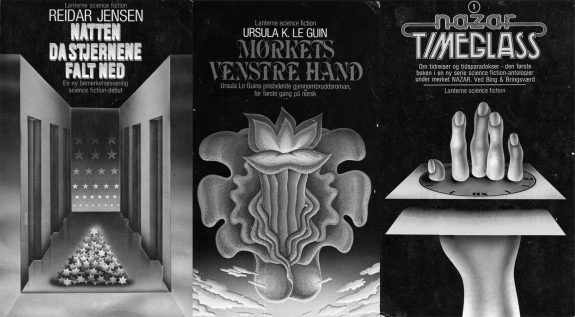 In 1960s and 1970s science fiction novel covers seemed to often allow space or free rein for quite out there, slipstream like illustration and design. 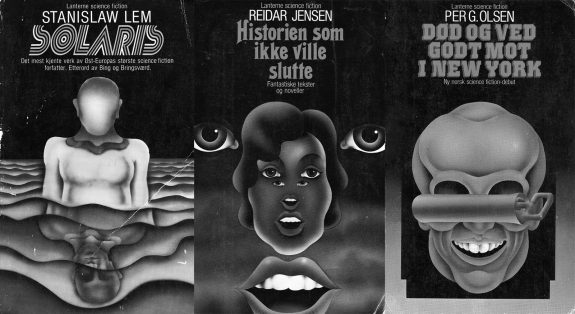 Along which lines a while ago I came across these covers for science fiction novels published in Norway by Lanterne, with illustrations by Peter Haars.

Some appear to be books by local authors and others are (I assume) translations of the likes of Stanislaw Lem, Ursula K. Le Guin, Brian W. Aldiss, C.S. Lewis and Kurt Vonnegut. 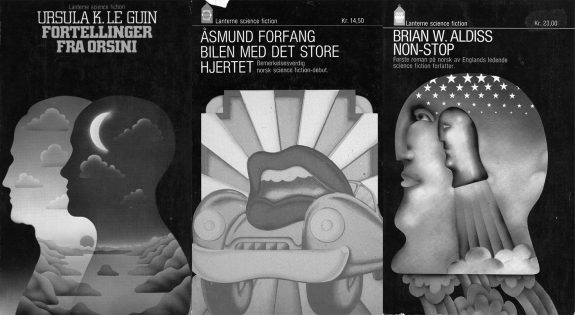 (Somewhere in an alternate universe the promotional art for Sapphire & Steel looked like this – as did the series.) 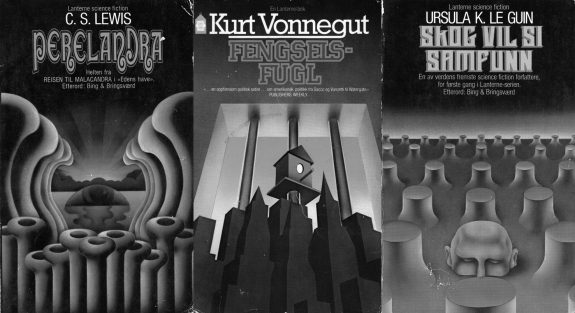 Looked at now they seem to combine and collide some kind of parallel-to-the parallel world of a hauntological record label and a point in time when the likes of “speculative fiction” magazine New Worlds and Michael Moorcock’s Jerry Cornelius captured and expressed a moment where science fiction and related writing was hiply, exploratively psych like. 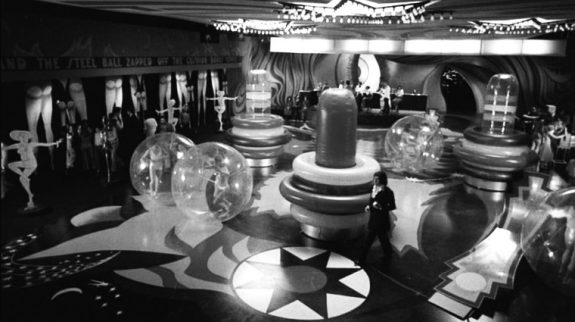 There is space in the world for a vast variety of takes on particular areas of culture and purely escapist and/or demographically targetted fan pleasing science fiction and fantasy orientated work has a place in that world.

However, at the moment it seems to be almost all of its particular world, which is a shame and a little too much of one shade when there are many available/possible.

Accompanying which, despite, potentially, digital technology could be a way of opening up channels of creativity to a multitude of shades, when I look at many independently produced and/or micro-budget science fiction etc films they seem often to be more, well, low-budget shadows of more mainstream fare.

Which again, there is a place for in the world but it seems to be much or nearly all of its particular world.

It seems a fair old while since I have seen the likes of Jonathan Weiss’ 2000 film adaptation of J.G. Ballard’s The Atrocity Exhibition or even the new worlds and visions jarring shock of say the earlier work by David Cronenberg. 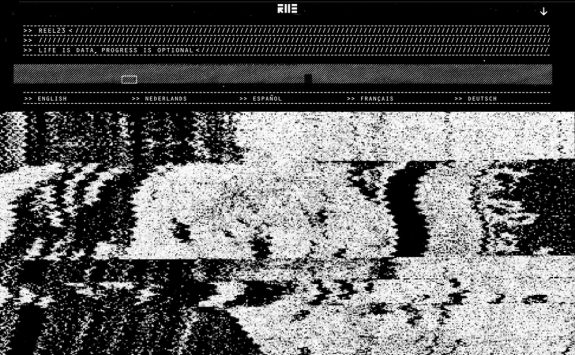 Along which lines, illustrator, designer and writer John Coulthart has written this:

“New Worlds was one of the most important magazines of the 1960s, mutating under Moorcock’s editorship from a regular science fiction title to a hothouse of literary daring and experiment. As with so many things in that decade, the peak period was from about 1966–1970 when the magazine showcased outstanding work from Moorcock himself, JG Ballard, Brian Aldiss, Harlan Ellison, Samuel Delany, M John Harrison, Norman Spinrad and a host of others. For a time it seemed that a despised genre might be turning away from rockets and robots to follow paths laid down by William Burroughs, Salvador Dalí, Jorge Luis Borges and other visionaries. We know now that Star Wars, Larry Niven and the rest swept away those hopes but you can at least go and see covers that pointed to a future (and futures) the world rejected.”

Elsewhere at A Year In The Country:
Week #11/52: The Modern Poets, otherly pastoralism and brief visits to flickering worlds…
Chapter 7 Book Images: 1973 – A Time of Schism and a Dybbuk’s Dozen of Fractures