A selection of reviews, broadcasts and arrivals in records stores of The Corn Mother album:

“You want to see the film as described in the liner notes, and as conjured in the songs on the album, and that’s an incredible trick to pull off… This is hauntology – the genre, rather than the philosophical dystopic – in its finest form, where buried memories of film, TV, music, and life come to the surface, often unverifiable because the hard copy has been lost or was never properly recorded in the first instance.” Alan Boon, Starburst

“Gavino Morretti opens the creep casting ceremony courtesy of the suspense tingling ‘Ritual and Unearthly Fire’. With its slow clock tocking pensive, a sweetly sinister aura descends, dropping from its orbital station, this prowling ethereal spirals with a chill tipped kosmische flashing much recalling Carpenter’s more mellowed lunar recitals as found on ‘Lost Themes’ and with it bathing the landscape with a somewhat, calm before the storm, like lull.” Mark Barton, The Sunday Experience

“The sense of dark electronic menace continues through offerings (the term is used advisedly) by The Heartwood Institute, Sproatly Smith and Field Lines Cartographer, while Widow’s Weeds contribute bad trip acid-folk and ‘The Night Harvest’ by A Year In The Country themselves moves into Coil territory. This remarkably cohesive collection is shaping new nightmares from yesterday’s broken dreams.” Ben Graham, Shindig! magazine, issue 86.

“The Heartwood Institute arrive with the terrific wonky eerie electro of ‘Corn Dolly’… ‘The Keeper’s Dilemma’ by Depatterning (has) the feel of isolation, with a clanging bell that feels like it’s just reacting to wind… Sproatly Smith are ‘Caught in the Coppice’ (that) flutters and coo’s along to a ghostly tune… Let us hope for a good harvest next year.” Andrew Young, Terrascope 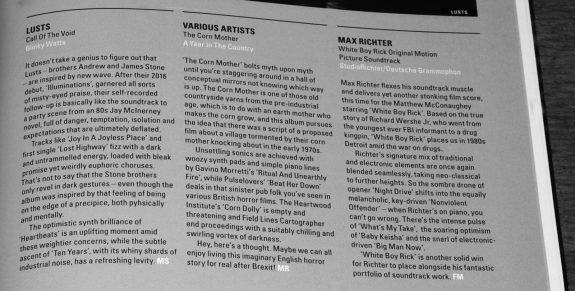 “Halloween may be over but its spell for me always lingers… and albums such as this are especially suited to chill days, early twilights and long, dark nights.” John Coulthart, feuilleton

“United Bible Studies, who on this recording comprise band founder David Colohan alongside Dominic Cooper of The Owl Service and Alison O’Donnell of Mellow Candle and Flibbertigibbet, provide a chilling piece of incidental music in which otherworldly murmurs are interwoven with unsettling soundscaping… Depatterning combine found sounds with surreal electronics, the piece’s various sections drifting in and out in the manner of a dream… Widow’s Weeds includes former members of The Hare and the Moon; they contribute an exceptional dark folk track setting truly beautiful vocals to a chilling mix of woozy electronics and intense neoclassical film music… An engaging album in which the apparently disparate genres of folk music and experimental electronica sit perfectly well together as different expressions of the same basic idea.” Kim Harten, Bliss Aquamarine

And so on to some of the radio etc broadcasts…

The Keeper’s Dilemma by Depatterning was on episode 248 of More Than Human, alongside the likes of Pendulum, Leyland Kirby and Sone Institute. Originally broadcast on CiTR FM, the show is archived here.

The Heartwood Insitute’s Corn Dolly was on the There’s a Moment of Arrival episode of record label Sunrise Ocean Bender’s radio show, accompanied by amongst others Wooden Shjips, Jagjaguwar and the soundtrack to Beyond the Black Rainbow. Originally on WRIR FM, the show is archived here.

Field Lines Cartographer’s Procession at Dusk was included on Pete Wiggs’ and James Papademetrie’s phantom seaside radio show The Séance, in an episode that also included work by Michael Nyman, Sabres of Paradise, and Dave & Toni Arthur (y’kno’, from television show Play Away). Originally broadcast via Radio Reverb and Sine FM, the show is archived here.

In a rounding-the-circle manner Corn Dolly by The Heartwood Institute, Procession at Dusk by Field Lines Cartographer and Ritual And Unearthly Fire by Gavino Morretti were on the 9th December 2018 episode of the You, the Night & the Music radio show, which is hosted by Mat Handley of Pulselovers, whose track Beat Her Down appears on the album. Originally broadcast on Sine FM, the show is archived here.

Widow’s Weeds’ The Corn Mother was played amongst the flipside of folk and hauntological explorations of The Unquiet Meadow, on an episode which also included Goblin, Raymond Scott and John Carpenter. Originally broadcast on Asheville FM, the show’s playlist is here.

And then on to The Corn Mother’s appearance in online and bricks and mortar record stores:

The album is available instore and online at Manchester’s Piccadilly Records (nice to see with all the hours a certain member of A Year In The Country’s “staff” has spent in there over the years). Visit the album at Piccadilly Records here.

And The Corn Mother is available at Juno Records (and ditto the above about the number of hours a certain member of A Year In The Country’s “staff” has spent there over the years). Visit the album at Juno Records here.

The Corn Mother can also be found amongst the vastly eclectic stock and unearthings of Warp Records offshot Bleep. Visit it at Bleep here.

And finally it can also be found at Norman Records, who have given sterling support to the A Year In The Country releases over the years:

“Understated, pastorally inclined A Year in the Country release another charming collection in characteristic monochrome. Today’s folkloric ruminations concern the mysterious 1970s screenplay for a made-but-never-released horror film called The Corn Mother. Destroyed or squirrelled away somewhere, the film is, in effect, lost to the ages. It endures by its whispered reputation alone; enough to inspire eerie contributions from the likes of Gavino Moretti, Widow’s Weeds and Sproatly Smith.”

A tip of the hat to everybody concerned, much appreciated.

The Corn Mother: Reflections on an imaginary film;
“In the early 1970s a folk horror-esque screenplay made the rounds of the film industry but remained unmade until 1982… The film was completed but was never released and knowledge of the whereabouts of the footage became lost, though subsequent rumours suggest that it may even have been deliberately destroyed…”

The album features music by Gavino Morretti, Pulselovers, The Heartwood Institute, United Bible Studies (David Colohan, Dominic Cooper of The Owl Service, Alison O’Donnell of Mellow Candle), A Year In The Country, Widow’s Weeds (featuring former members of/collaborators with The Hare And The Moon), Depatterning, Sproatly Smith and Field Lines Cartographer. The album’s design and layout is by Ian Lowey.

The album is also available at our our Artifacts Shop, Bandcamp, Greedbag and Amazon

A selection of tracks can be previewed at Soundcloud and Bandcamp.