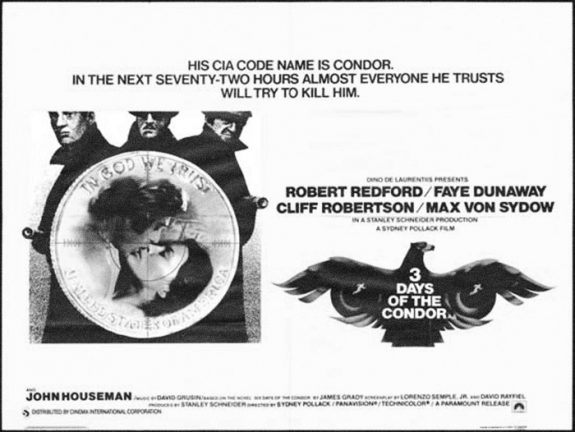 In Part 1 of this post I began to write about a section of 1970s American film that is variously imbued with a sense of paranoia, unease and surveillance and which reflected the domestic turbulence of the background in which they were made, commenting that along these lines could be included, amongst others, the films The Anderson Tapes (1971), Three Days of the Condor (1975), The Parallax View (1974) and The Conversation (1974).

In it a desk bound American intelligence agent, code named Condor, works in a research department whose job it is to read books, newspapers and magazines from around the world looking for hidden meanings, possible connections to real world plots and also to draw from fiction possible new techniques for use by the intelligence services.

While he is out at lunch one day his entire department is assassinated and when he realises that he does not know who he can trust in the intelligence services he goes on the run and attempts to work out the reasons for the assassinations, hiding out in the city with an at first unwilling female accomplice.

The film presents a sense of a vast, heavily funded and technologically advanced intelligence agency infrastructure and headquarters, accompanied by an almost workmanlike efficiency and procedures which seems a cold remove from the reality of lives being lost and people getting their hands dirty in the field.

Both The Anderson Tapes and Three Days of the Condor use credit card/cheque fonts in their title sequences, which at the time suggested computerisation and an associated sense of the use of new technology.

Connected to which both films are in part a reflection of advances in surveillance and related technology – whether equipment used and adapted to observe and record subjects or period computers.

An inherent part of the films mentioned in this post is their use of then modern recording equipment and sometimes computer based technology, something which at the time of their making had a bulky, often imposing physical presence.

As with the typefaces used in the credits, the flashing lights, teletype printer and constantly moving reel-to-reel data tapes of the computers featured are prominent signifiers of a particular period and stage of development in digital technology.

Sydney Pollack’s film shares not having a “happy” ending with The Anderson Tapes; in Three Days of the Condor the plot is left particularly ambiguous as the Condor turns his back on the intelligence agency and goes to the press with details of the conspiracy he has uncovered.

However, the film ends with him not knowing if his story will be printed and having been told by an intelligence agent that he is “about to become a very lonely man”.

In many ways the story is one of an individual who is initially just going to work and doing his job in a day-to-day manner, without possessing or being driven by a great need to serve his country etc, nor seeming to even particularly be aware of the wider, real world ramifications of the research he is doing.

(This attitude shares some territory with the just mentioned efficient, workmanlike infrastructure of the wider intelligence agency and the sense in the film of it being in part at a remove from the realities of field work.) 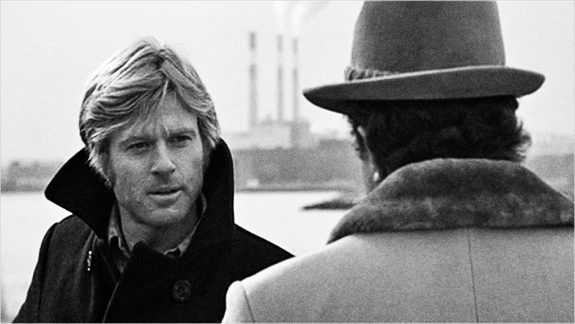 As the film progresses he becomes not dissimilar to a lone noir-ish knight in shining armour private detective as he attempts to understand and later expose the conspiracy he has uncovered and in common with say author Raymond Chandler’s Philip Marlowe, he displays a variously resourceful, determined, stubborn and almost pig-headed determination in doing what he considers right.

Although with Marlowe there is a sense that his morality is an inherent part of him and ever present, while within the Condor it is portrayed as possibly always having been a part of his character but it was subsumed under a wish for an easy, routine life, with him only being morally radicalised by his experiences.

Three Days of the Condor has had numerous DVD and Blu-ray releases, most recently in the UK by Eureka!/Masters of Cinema, in an edition which, as with Powerhouse’s release of The Anderson Tapes, has a high-level of attention to detail, extended booklet, extras etc.

James Grady’s novel on which the film is based is also worth seeking out – it is a short first novel that has stood up well to the passing of time and is a gripping, quick and easy read which also reflects the author’s extensive research into the intelligence agencies, communities and methods of operation.

Elsewhere at A Year In The Country:
Week #39/52: An elegy to elegies for the IBM 1401 / notes on a curious intertwining
Wanderings, Explorations and Signposts 47/52: The Dawning of a New Cinematic Age of Surveillance Part 1 – The Anderson Tapes