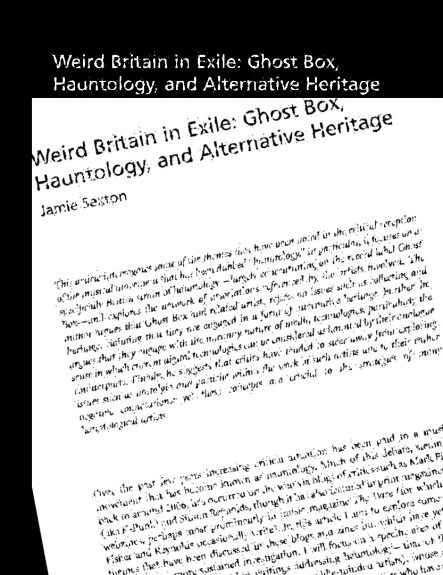 The quotes from this page are from an academic article by Jamie Sexton called Weird Britain in Exile: Ghost Box, Hauntology, and Alternative Heritage.

Although academically formal in nature, it doesn’t tend to stray too far into the drier fields of such things and serves as an interesting overview and debate of a number of themes surrounding such things, taking in along the way the aforementioned Ghost Box Records, English Heretic, Mark Fisher (see Day #163/365), the writing of Simon Reynolds and the wanderings of Iain Sinclair and Shena Mackay (see Day #225/365 and Day #222/365).

It’s a curious world where it has become acceptable for their to be serious academic study of areas of culture which would have previously been considered throwaway, too much a part of low/pop culture etc.

That’s not said in a judgemental on either side manner, more just its intriguing when you can wander through the isles of the library deposits of such places and go “Oh, there’s the section on mondo British trash cinema” and the like…

If you take one of the aspects of hauntological culture to be a kind of mourning for lost futures and the nurturing/space provided by publicly funded creative and municipal projects, then academia could well be seen to be one of the last outposts of such freer spaces; a place where society goes to think and dream, to semi-quote William Gibson.

Although now those particular spaces are more likely to be at least partly funded via the future earnings and debts of its temporary participants than via the public purse. 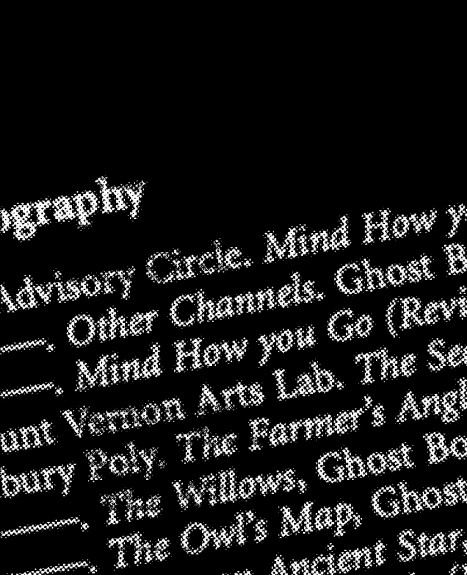 In Simon Reynolds article on such things, Haunted Audio (again see Day #262/365), he says about some of the cultural creators who have been labelled hauntological: “Like Stereolab or the England’s Hidden Reverse groups (Current 93, Coil, etc) they enjoy the game of mystique cultivation but feel an equally strong impulse to edify, a pedagogic compulsion to share their knowledge treasure.”

If you should replace the names/groupings of musicians with that of academia/academics, particularly in the realms of media studies, then more or less the same could apply.

Ghost Box and cohorts appear to often take the ordinary and reimagine/reinterpret it so that it is presented in a more arcane manner. So, once mainstream television transmissions and films become otherly reflections and reinterpretations of themselves.

Academia carries out a not dissimilar activity in the realms of popular media investigations by applying its own esoteric language, rituals, naming structures, cataloguing and so forth.

Upon finishing reading this article, wherein one arcane cultural investigator considers the work of other but separate arcane investigators, I came away with the sense that somewhere, in an imaginary parallel existence, Ghost Box Records and interconnected compatriots had carried out a study on the intriguing semi-hidden world of academics.

The article discusses legitimate vs non-legitimate cultural curators/collectors/collections (ie museums vs bedroom record etc archivists) and retro/pastiche orientated work when it is self-aware/declaring as opposed to strictly revivalist… but accompanying that is an unacknowledged and quite intriguing subtext of its own cultural position and milieu mirroring of such things.

Below is a selection of cuttings and clippings from this particular investigation:

1) “…critics have tended to steer away from exploring issues such as nostalgia and pastiche within the work of such artists due to their rather negative connotations; yet these concepts are crucial to the strategies of many hauntological artists.” 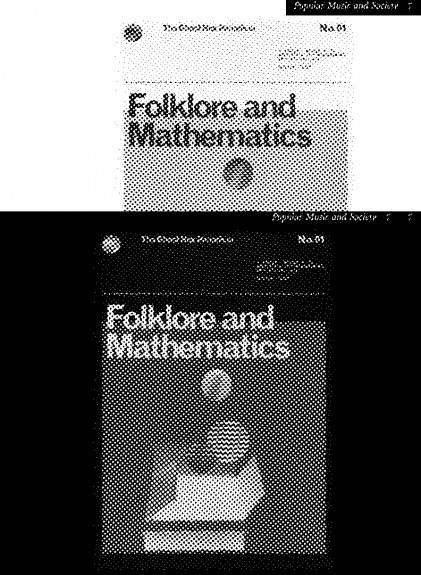 2) “Psychic Heterotopias… refer to places that exist within society (unlike utopias) but which are in some senses separate from, and other to, the broader social space within which they exist.”

3) “One of the key themes feeding into this strain of hauntology is the role of the collector. Ghost Box, for example, is a label that emerged with a very particular aesthetic identity forged from a mixture of speciﬁc references. It was, in a sense, a particular aspect of its owners’ collections writ large, a projection of their tastes.”

4) “…socially less respectable collector-organizations emerging around the nineteenth century, such as wax museums… It is this “underside” of collecting which informs the Ghost Box aesthetic, though its collecting is largely based on recordable media—record collectinginparticular,butalsothecollectionofbooks,ﬁlms,andtelevision programs.”

5) “Rare records, in their very sacredness, have recovered some of the specialness lost to mass-produced, commodiﬁed artworks.”

6) “The regularity of particular types of material—horror and other forms of fantastic media, outdated forms of media hardware, state-assisted education initiatives,antiquated visions of the future—forming this aesthetic is so insistent that it must also be considered a form of curating, of highlighting particular cultural artifacts as worthy of preservation, a process of “containing the past to recover and revivify it.” 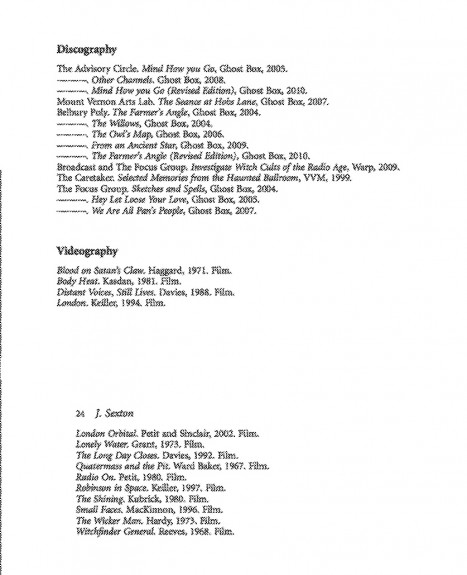 7) “…introduces a new model of media access and amateur historiography that, whilst the images are imperfect and the links are impermanent nonetheless realizes much of the… potential to circulate rare, ephemeral, and elusive texts.”

8) “…there exist a number of what could be termed marginal movements which place an emphasis on different kinds of heritage from those propounded by organizations such as the National Trust or English Heritage. Ghost Box and its affiliates can be partly related to this surge of interest in marginal national history, in preserving a form of alternative heritage.”

9) Via English Heretic:  “…we aim to help people decode and realise the alchemical ciphers and conspiratorial interplay of the buildings and landscapes around them.”

10) “The “media pilgrimage” has become a common part of modern life, as physical locations become overwritten with meanings and values which emerge from their use within ﬁctional environments.” 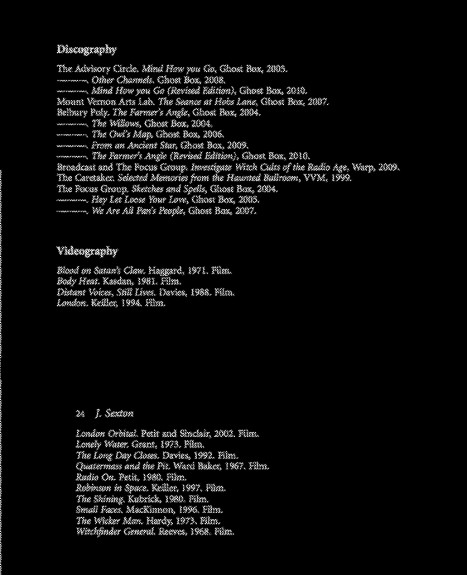 12) “This, as noted, is a quite self-conscious defamiliarization of more conservative notions of heritage: whereas that form of heritage generally celebrates the past as a safe haven, Ghost Box emphasizes the more eerie, unsettling vestiges of cultural history; whereas that mode of heritage viliﬁed post-war Brutalist architecture, Ghost Box includes it as another inspirational touchstone… an uncanny experience occurs either when infantile complexes which have been repressed are once more revived by some impression, or when primitive beliefs which have been surmounted seem once more to be conﬁrmed…. By being placed within a uniﬁed aesthetic framework, these apparently dissimilar references are uncannily connected, made strange through their interrelationships.”

12)b) “Thus, similar to the way in which Ghost Box can be seen as engaging in alternative forms of heritage, it can also be considered to be practicing alternative forms of nostalgia and pastiche… this is a mode of pastiche that can be largely differentiated from other forms through its ransacking of generally obscure sources. It is, therefore, not so much the absence of pastiche and nostalgia that typiﬁes the label and its general critical acclaim, but rather the displacing of these concepts through strategies of selectivity and framing.”

The article can be read (after jumping through a few hoops) here.