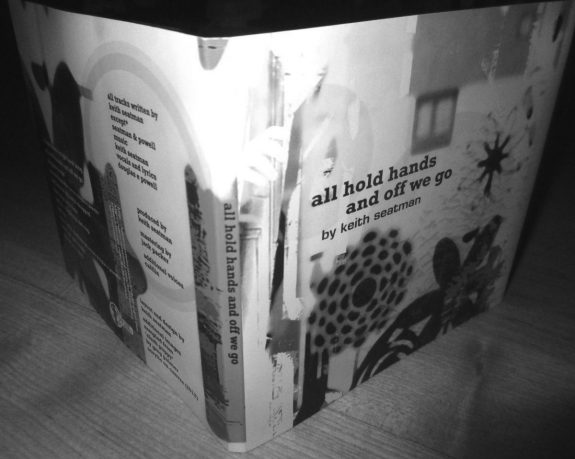 Its title is all hold hands and off we go.

(Which yes, should be in lower case and it being so I think suits the album in some way that I can’t quite fully define but which is possibly connected to a sense of childlike play or innocence that the title and some of the music implies.)

How to describe the album?

Well, it is a curious and intriguing dreamscape of a record. It makes me think of floating off into odd and surreal landscapes.

Carl Griffin in Electronic Sound magazine used the phrase/word “haunted fever dreams” and “woozy” when describing the album, which capture and reflect a sense of it conjuring a world and atmosphere not quite awake, of travelling in a reality that is half-dream, half-awake, elsewhere… 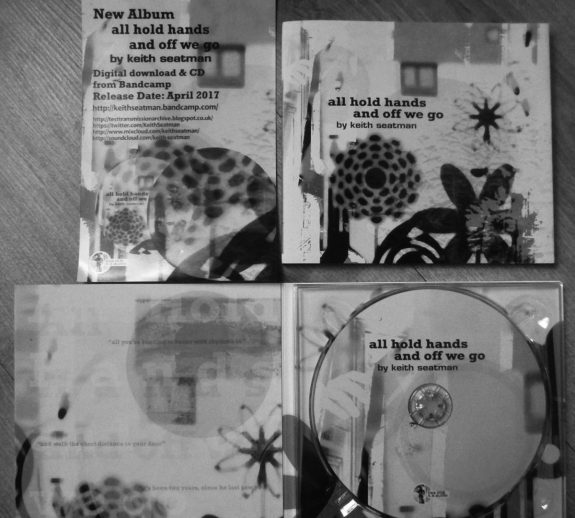 In say older science fiction book covers, comics and films and sometimes in previous decades science related factual television programmes there would from time to time be blank virtual landscapes demarcated by a grid of lines that stretched off into the horizon.

Well, if you imagine something like that but which somehow or other was actually also a representation of a quietly parallel British landscape…  somewhere an organ that was used on a lost library music album appears… fragmented wisps of memory keep appearing here and there… and you put such things through a filter of odd synthesisers that nobody thought still existed anymore and the exploring spirit of the Radiophonic workshop…

Well, that’s what this album sounds and looks like in my mind.

A particular standout on the album for myself is boxes with rhythms in, with vocals and lyrics by Douglas E. Powell.

When I first listened to the track and heard the lyrics, I initially laughed out loud as they seemed to sum up something about humans, our drives, natures and relationship with culture: 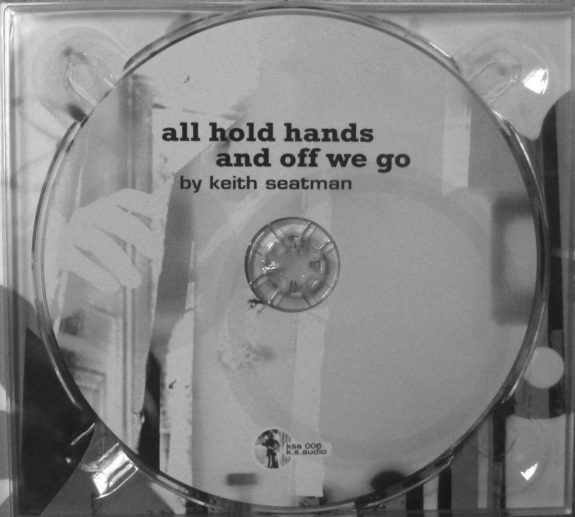 This is a Space Oddity for contemporary times. In a very few words set to a buzzing, whooshing, flittering in and out synth background it conjures up a whole world and scenario of its own particular Major Tom.

However, whereas Space Oddity seemed quite grounded in a recognisable reality, here, as with the album as a whole, the atmosphere it creates is something more otherly, one that while connected to our own reality also runs along its own separate path.

And although this is quite experimental, far from mainstream music, boxes with rhythms in has an underlying pop sensibility, accessibility and an ear for a catchy refrain/chorus.

(In fact, returning to earlier mentioned quietly parallel British worlds and landscapes, in some other parallel existence, of a Thursday night it would not be all that much of a surprise to hear on BBC1: “And tonight on Top Of The Pops with their new single, which has gone straight into the Top 20, we have Keith Seatman with Douglas E. Powell playing boxes with rhythms in.” Cue slightly awkward dancing and possibly a balloon drop. In the history of pop in that parallel world it could well be filed alongside Laurie Anderson’s O Superman in terms of experimental work with an intriguing pop edge.)

The mixture of experiment and accessibility is something that runs throughout the album – it’s quite “out there” at points but also very listenable to.

Carl Griffin also wrote in Electronic Sound Magazine about the album being “uniquely psychedelic”, which is quite apt. 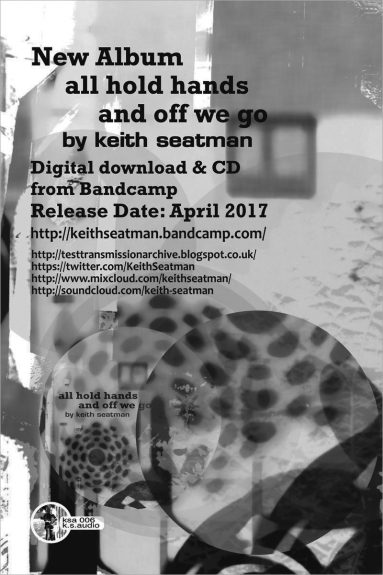 However, as with me mentioning the Radiophonic Workshop, the sense of psychedelic is more an expression of its spirit and intentions, rather than being a replication of a previous era’s sound or ways of going about things. It is psychedelic in the sense of being a portal for exploration, one accompanied by entering into a dreamlike state via the transportive aspects of music rather than lysergic acid.

That dreamlike state is given quite overt expression on with salt and candy, where a sample of a child’s rhyme loops repeatedly, disappearing and reappearing in amongst a synthesised soundscape that manages to be unsettling and playful, distant and familiar, warm and comforting and seemingly reflecting and creating somewhere far removed from normality.

The mixing and seamlessly combining and bringing together of atmospheres that you would not normally connect with one another is probably one of the defining aspects of the album; this is an unsettling, playful, warm, comforting, distant, familiar, experimental, accessible record.

ATV Guide: all hold hands and off we go/ boxes with rhythms in