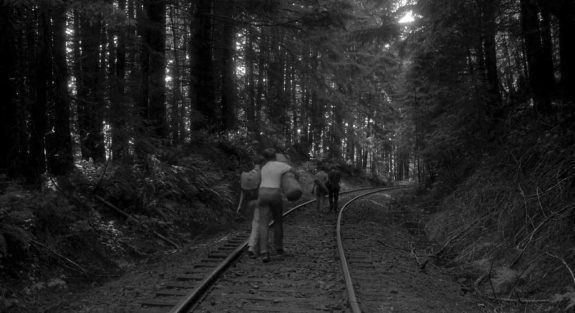 Stand by Me is a 1986 film directed by Rob Reiner and based on Stephen King’s 1982 novella The Body.

Set in 1959 it tells the story of four young mostly teenage boys who live in a small town in Oregon, USA who set off on a hike to find the dead body of a missing child.

It could be loosely connected with other films made in the 1980s which looked back on the 1950s and on some levels is quite a non-threatening coming-of-age family film and a sweetly nostalgic look back on a previous era but it also operates on other levels, not least that these young boys are essentially on a rather macabre mission to not so much just find but also view the dead body of somebody who has been murdered. The town’s bullies are also shown to be particularly out of control, with their leader shown as carrying and being prepared to murderously use a switchblade, while in its voiceover conclusion we are told that two of the boys’ lives have had far from happy futures. 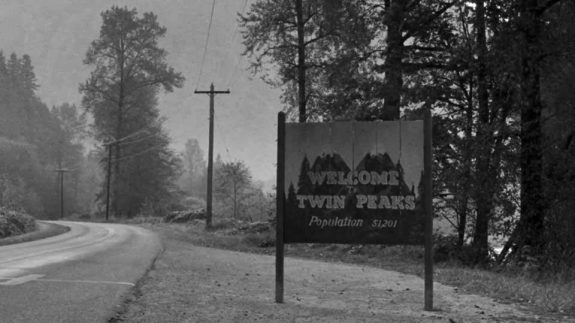 In this sense while it is set in a small rural town and its surrounding areas it is not an overly sweet picture perfect, white picket fence view of such areas of America and the 1950s. Rather to a degree it portrays a underbelly which, while a much gentler portrayal of such things, brings to mind David Lynch’s Blue Velvet (1986), a film that is set in the then contemporary era but through its use of music and style seems to at points hark back to the 1950s and a time that has been described as “a safe, quiet moment in history”. Lynch’s film explores a vision of small town America which on the surface initially appears normal but that is actually rife and even corrupted by darker undercurrents, something that he would go on to further explore in the television series Twin Peaks (1990-1991) and which is part of a form of weird Americana aesthetic which developed during the 1980s.

As often seems to be the case with teen and youth orientated film, parents and supervisory adults in Stand by Me are often curiously absent and/or they are a source of problems rather than mature supportive figures; in the film one father is in what is described as a “loony” bin (i.e. a mental hospital), another set of parents are numbed and made dysfunctional by grief and so forth. The children also do not seem to ask their parents’ permission to stay out over night and despite this nobody in the adult world is shown as considering them missing.

With the film’s rural location there is a sense of this almost being an overlooked and an only semi-developed place, where nature may at any times just re-encroach and take over the town. When the children leave its environs, very quickly it seems as though they have stepped into a near wilderness, which is marked as being part of civilisation by the presence of the railway track that they follow but the rural areas seem otherwise curiously unregulated and near frontier like, while a scrapyard the group of boys hang out in is shown as a dangerous or also unregulated edgeland like place.

In some ways Stand By Me could be seen as the John Hughes film he never wrote/made (Hughes is well known for a cycle of 1980s teen orientated films including Pretty in Pink and the Breakfast Club from 1986 and 1985 respectively, which often dealt with class, outsider status and coming of age issues).

As with that cycle of Hughes’ films Stand By Me is in part about class and the way it and also family background can restrict choices and effectively preset pathways through life; in the voiceover conclusion to Reiner’s film the viewer is told that the normal child goes on to have a normal job and family life and the child from an unsettled family ends up wayward. Another child from a family of drunks and criminals takes college courses, escapes from the binds of his earlier life and becomes a lawyer but is murdered when breaking up a fight in a fast-food restaurant. The narrator, whose parents were the ones numbed by grief and who neglected him, is from a middle class family and despite the more dysfunctional aspects of his background he has gone on to be a successful, published writer and at the end of the film is shown living a normal family life as he walks outside and drives away with his son and his son’s friend to take them swimming.

Indeed Stand by Me seems to represent a turning point towards these preset pathways, as the voiceover also tells of how once they return from the voyage the friends largely drifted apart.

While largely a fairly realist film, albeit in a Hollywood manner, there is a curious and disjunctive section where the boy who will go on to be a successful writer tells the others a story about a pie eating competition which results in a mass outbreak of prodigious vomiting in the audience – all of which is portrayed in vivid detail. As mentioned earlier the film was based on a novella by Stephen King and the surreal fantasy like aspect of this section could be seen to be a point of connection to other areas of his fictional output such as the fantasy and horror work for which he is probably best known.