In Part 1 of this post (which can be read here) I wrote about the film The Creeping Garden, a documentary on slime moulds – a form of life which seems to be neither animal nor vegetable and which appears to possibly possess a form of intelligent and collective problem solving.

As mentioned in Part 1, the film is presented in a way that harks back to previous decades’ science fiction films such as Phase IV, Invasion of the Body Snatchers, The Blob and The Andromeda Strain and takes a multi-layered approach to those who study and work with slime moulds – from institutional collections to amateur observers, via artists, musicians, scientists etc, with those different branches, strands and definitions being show as often overlapping.

According to the film slime moulds have not been overly studied or of interest to mainstream science but are shown in The Creeping Garden to have been of considerable interest to what could be considered amateur and/or fringe science and/or where such things meet artistic expression and exploration; the film features a number of people who produce creative work which incorporates slime moulds, including composer Eduardo Reck Miranda who “jams” at the piano with musical sounds that are triggered by electrodes which register the emotional responses of slime moulds to stimuli.

While the work of the Unconventional Computing Centre, a university research department in the UK, is shown as creating synthesized music/sounds using data produced by recording/analysing slime moulds responses to various scenarios and stimuli: the resulting audio appears to represents emotions – when food is plentiful they produce impulses which effectively generate “happy” state sounds, when humidity and food are gone they enter a panic mode and the impulses they then create while deciding whether to try and escape or become dormant produce a more manic soundscape, while if they then decide to sleep/become dormant then their responses seem to wind down and produce a calming set of sounds.

Wandering further into areas where science meets creative expression in connection to slime moulds, in The Creeping Garden Klaus-Peter Zauner, a physical sciences and engineering researcher, uses/enables slime molds to operate a circuit board on wheels and researcher Ella Gale uses data generated by slime molds to assign facial expressions to a disembodied robotic head. 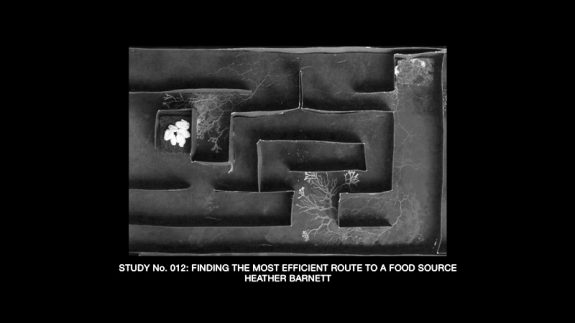 And also further blurring the “are they living creatures or plants, do they act through intelligence or not?” aspects to the film, the slime moulds are also shown in work by artist/researcher Heather Barnett as being able to for example work out the best way through a maze to reach a food supply, while elsewhere in the film similarities are shown between their growth patterns and the development of highways that connect cities together.

“P polycephalum is a plasmodial, single-celled organism which grows outward from a single point, searching for food sources. Once these have been located, the many branches it has sent out die back, leaving only the most efficient route between food source nodes.” David Parr in The Guardian, writing on the use of slime moulds to explore and replicate transport networks.

As mentioned in the film, because of the above problem solving aspect of their behaviour the study of slime moulds has been used as way to plan crowd control and the most efficient way of enabling people to move from one area to another.

The film returns a number of times to Mark Pragnell, who studies slime moulds in their natural forest setting. Described as an “amateur” he seems to have a genuine passion for his subject, one which reflects the origin of the word amateur from the Latin amo which means to love.

It also features the work of cinematic nature documentary pioneer Percy Smith, who in the 1930s made the film Magic Myxies about slime moulds, utilising his innovative and pioneering use of  micro and time lapse photography, which he rather pleasingly and in an almost pre-hauntological manner called time magnification.

As with The Creeping Garden, Smith’s film on slime moulds seems to exist in an almost slipstream hinterland somewhere between scientific study and an imaginative fantasia, with it attributing emotional responses to them:

“Notice how it quivers with delight over a good meal.”

As I mentioned at the start of this post The Creeping Garden is an intriguing and curious film, one which lingers in the mind after viewing and seems to open up as many avenues of questioning as it answers about these curious organisms, not least why they have not been the subject of more extensive mainstream scientific investigation than appears to have so far been the case.