Part 3 of a post that takes as some of its starting points the folk/fairy tale Little Red Riding Hood, the film The Company of Wolves and “The dangers of straying from the path and tales of lycanthropy” (visit Part 1 here and Part 2 here).

As mentioned in Part 1 the fairy/folk tale of Little Red Riding hood has had an enduring and near ubiquitous presence and even many centuries later is still repeatedly reinterpreted and used as inspiration for film and television dramas, one of which is The Company of Wolves, a 1984 film directed by Neil Jordan.

A more recent take on the tale was Red Riding Hood, a 2011 film directed by Catherine Hardwicke and which is very loosely based on its source material. This version has been called a “romance horror”, which is not all that surprising once you learn that Catherine Hardwicke also directed Twilight (2008), which was a form of “vampire romance horror” aimed at teenagers/younger adults and was a large-scale commercial success that went on to take nearly 400 million US dollars at the box office.

Red Riding Hood may have been a conscious or not attempt to see “if it worked for vampires, it might also work for werewolves.”

Red Riding Hood takes the original tale’s possible focusing on the passage to maturity and woman hood of a young girl and transplants it more into the landscape of post-teenage angst, rebelling again parental approval and the eventual triumphing of a love which they disapprove of.

This 2011 take on the fairy tale sits alongside other contemporary television and cinema reinterpretations of mythology and fairy tales that includes the likes of television series Grimm (2011-2017), which was a form of police procedural set in a contemporary world where mythological creatures exist and Once Upon a Time (2011-2018) in which characters from various fairy tales and other stories have been transported to a real world town while also being robbed of their original memories and the film Hansel & Gretel: Witch Hunters (2013), which has been described as being a “dark fantasy action horror comedy film” (y’kno’, just to make sure it appeals to the fan base of as many different genres as possible). 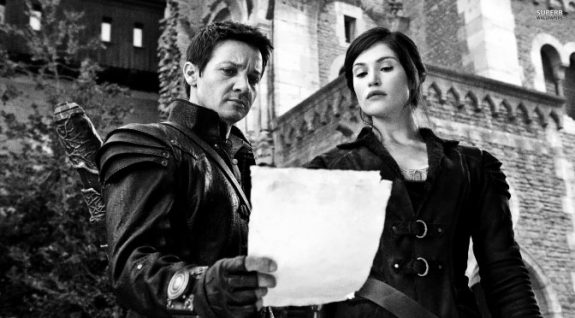 Hansel & Gretel: Witch Hunters is set in an unspecified time period probably hundreds of years ago and is very loosely inspired by the original German fairy tale Hansel & Gretel where a young brother and sister are kidnapped by a witch who lives in a forest, in a house constructed of all kinds of sweets, cakes etc, where she intends to fatten up the brother before eating him. In the original version the children do eventually defeat the witch and escape to live “happily ever after” with their family but in the 2013 film they defeat the witch and become famed roving witch hunters.

Essentially it is a sequel to the original Hansel & Gretel fairy tale, a suggesting of “what they did next and what became of their lives after they had been through a traumatic experience”. Although not necessarily overtly expressed, this is something of a divergence to a degree from standard genre film tropes, where often a story ends at the point when the foe has been vanquished or soon after and before any potentially complex longstanding emotional and psychological after effects can be seen.

However (please note: spoiler alert) there is no need to worry as Hansel & Gretel do ultimately defeat their latest witch foes – although the film ends with a sense that their quest is unending and that they have now added new younger recruits to their cause. In a way, while it could be argued that while there are still evil witches loose in the world that their work is necessary in terms of fighting the good fit, it could also be suggested that their lives have been permanently scarred and set along a possibly never ending particular path of seeking out and even acts of vengeance by their previous experiences.

The film is at heart a blockbuster action romp and a popcorn friendly piece of cinematic escapism, which while being set in times gone by adds a number of contemporary touches to the story and technology portrayed; the duo’s weaponry is a steampunk-esque take on period weaponry and the forced diet of candy that the witch inflicted on Hansel has left him diabetic and he needs an insulin shot every few hours or he will die. 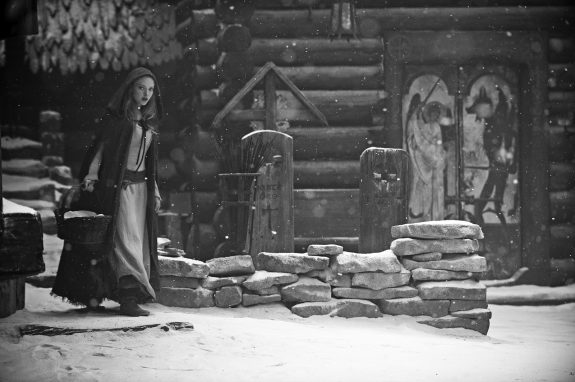 The 2011 film Red Riding Hood also brings a contemporary aspect to its source material in that it contains a considerable amount of ambiguity and darkness; in it a village is threatened by a mystical wolf creature/a werewolf and the story revolves largely around Valerie, who is the red hood/cape wearing Little Red Riding Hood character (albeit more a young woman than a young girl).

In order to defeat the wolf a renowned witch hunter from outside the village called Father Solomon is asked for help. His actions increasingly blur the lines between good and evil as he employs increasingly harsh authoritarian and questionable methods in his quest to discover and kill the werewolf, possibly causing more death and distress than his foe does. He imposes his dictatorial will on the village via his group of heavily armed men, who could be seen to be a paramilitary force of questionable authority.

All this is done under his declaration and justification that “We do this for the greater good”.

Although his men seem fairly disposable and prone to being despatched by the wolf, for a good portion of the film Father Solomon himself appears near omnipotent, if somewhat ineffective in his quest but quite suddenly his reign ends and he himself is first possibly mortally wounded by the wolf and finally turned on and killed by one of his own men. Even at the end he maintains that his actions were undertaken for higher moral purposes:

“I only meant to serve. To protect us from darkness.”

As with much werewolf, vampire etc genre fiction and film, Red Riding Hood contains its own mythology on restrictions that are placed on the werewolves actions and abilities; here the wolf cannot enter Holy/church grounds, although this is not explained why, just as say often in fictional work vampire’s cast no reflection in mirrors for largely unexplained reasons and they are particularly defenceless against Holy water, crosses and so forth.

In Red Riding Hood the inability to enter Holy ground seems to imply that the werewolf is inherently evil, which appears to be at odds with the film’s ambiguity about the creatures, their motives and their position on the scale of good and evil – something which is particularly highlighted due to the ambiguous nature and actions of Father Solomon.

Initially the ending of Red Riding Hood appears to connect with Hansel & Gretel: Witch Hunters in a sense of acknowledging the traumatic after effects of dark and extremely distressing experiences. Valerie finds that she no longer wishes to live in the village and has begun to live an isolated life in her granny’s former home in the woods:

“Everything I knew was ripped apart. I saw it differently, all the lies… the wolf didn’t come back but the village still lived in fear, it was the only life they knew.”

At this point her “forbidden” and parentally disapproved of romantic love is no longer present as he had been bitten/infected with the werewolf curse during the film’s battles and he has nobly left in order to learn how to control this infliction.

Ultimately though the film returns to more well trodden genre routes, expectations and a sense of a “true love conquers all” happy ending as he returns to her and the final scenes show them frolicking in the snow happily and free together.