Something of a gathering of the flipsides of automobiles and roads…

The book On Roads: A Hidden History by Joe Moran was published in 2009 and is a written (rather than say walked) psychogeographic wandering amongst, well, the hidden history of roads. 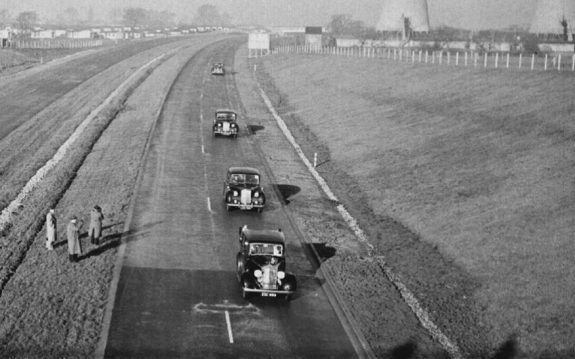 There is a slight hauntological like mourning for the shape of the future’s past to the book here and there, particularly in the title of the chapter “The motoring we used to dream about” and when the book focuses on the events surrounding the birth of the British motorway system and related modernist intentions. 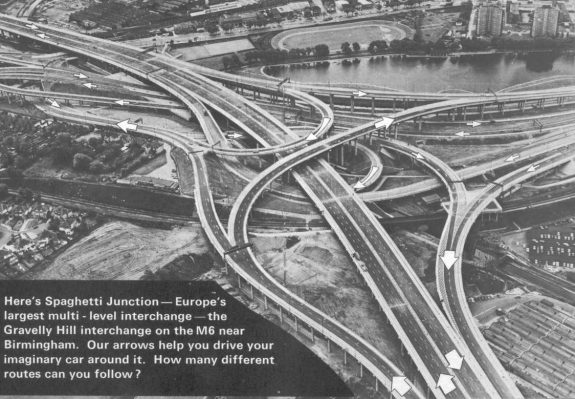 That is highlighted by Joe Moran mentioning on his blog the I-Spy On The Motorway book from his childhood which viewed now, even though some similar scenes and motorways exist today, seems in some subtle, indefinable manner to belong to an almost impossibly distant other modernist, if slightly utilitarian and possibly worn seeming, world.

(The I-Spy books were a form of children’s “spotter” books that were particularly successful in the 1950s and 1960s –  each book focused on a particular subject and as children spotted the items listed in the book they recorded the event in the book and gained points based around how unusual the sight.) 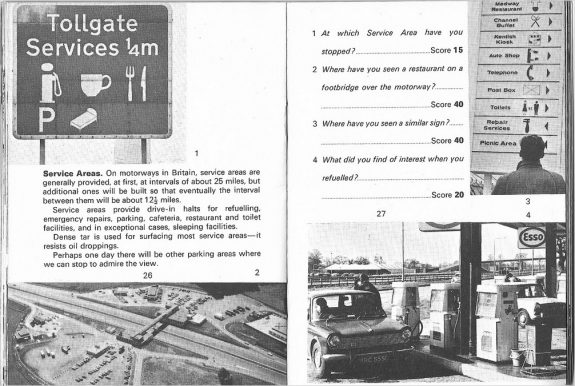 I could well be writing for the rest of the year and then some about On Roads, as it is so full of and strewn with observations, history, facts and connections; it seems to represent the summation of a monumental amount of research.

There are a few pieces of information in particular that have stuck with me from the book; the way that in a time of a major emergency/impending apocalyptic conflict, major roads would be reserved for the use of official and “important” persons – nice to know that many of the people who would have potentially been part of the process of getting us into such a situation wouldn’t be stuck behind a lorry on their way to work/refuge.

Also that when the first motorway was being built-in Britain the concrete spreaders used were left over from laying instant airstrips during the war, while amongst the standard bulldozers were also some recycled Sherman tanks, which while I applaud the make-do-and-mend nature, the appearance of these tanks in that situation was probably also somewhat surreal and almost film-set comedy like.

And so onto more automobile, autobahn and related wanderings…

Autophoto is a handsomely produced book published by Éditions Xavier Barral and Fondation Cartier pour l’art contemporain in 2017 to accompany an exhibition of the same name and which collects a wide range of car related and often more expressive/fine art photography.

This takes in frontier like edgeland car racing, Ballardian close-ups of damaged cars, almost folk art-like temporary automobile home repairs, cars left in the middle of forests that have been largely overgrown, documentary images of people and their cars, the almost abstract patterns of huge stores of used car parts, images which blur the line between forensic recording and expressive intentions within photography etc.

There is often a form of framing and/or guiding of the eye in many of the photographs in the book; the windows and body work of cars create a natural, inherent form of framing of their subjects, whether of the occupants of the cars or looking from the inside out to the landscape and other subjects.

Also straight-ish roads leading off to the horizon, which feature in a number of the photographs in the book, naturally draw the eye and create a central focus point to the images.

Connected to which, although cars and roads are often associated with urban areas, much of the photography in Autophoto is rurally located, often being documents of isolated areas and/or say photographs of roads in wide open prairies with just a distant dust cloud to mark the movement of a car.