In Part 1 of this post I wrote about the books On Roads: A Hidden History by Joe Moran, which is a multi-layered, interconnected wandering along sometimes semi-hidden or semi-forgotten history in relation to roads and Autophoto by Editions Xavier Barral and Fondation Cartier pour l’art contemporain, which is a collection of car and road orientated photography, often with a more fine art/expressive slant. 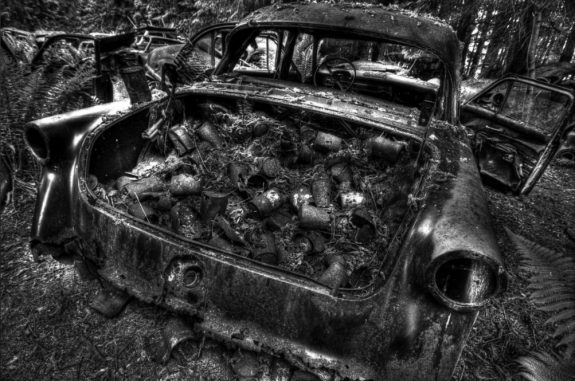 Some of the photographs in Autophoto document cars abandoned amongst nature and plantlife; online there is a considerable amount of similar photography alongside that of abandoned roads, which is a subsection of imagery that focuses on recording  abandoned and derelict buildings, infrastructure etc. 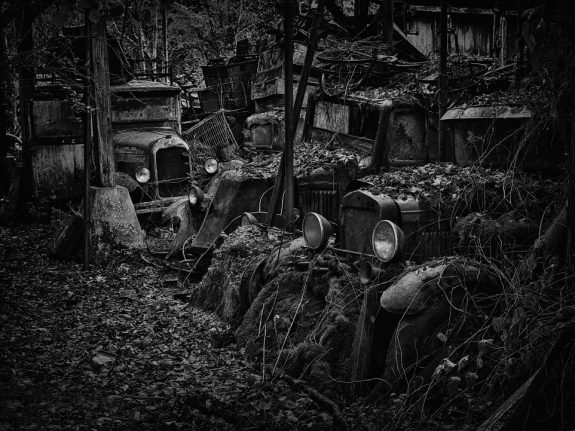 Photographs of cars abandoned in natural settings can often appear quite stylised and arranged but this “styling” has happened naturally with the passing of time, something such photographs record via the decay of the vehicles and the spread, growth and reclaiming nature of the plants.

Both the photographs and the cars/locations themselves also are often a form of time capsule in the way that they can provide fading but resilient snapshot of previous eras’ design and aesthetics and the cars themselves can be seen to become a form of three dimensional recording of echoes from the past.

The books, images and web pages in Part 1 and 2 of this post could be filed alongside previous wanderings at A Year In The Country amongst the dust, history and spectres of cars and roads:

1) Edward Chell’s Soft Estates which is an artistic and text-based exploration of the edgeland areas that surround roads.

2) Landgdon Clay’s Cars New York City, 1974-1976 which is a beautifully photographed and produced book of cars parked in almost peopleless streets at night which have a subtly eerie quality.

3) Martin Parr’s Abandoned Morris Minors of the West of Ireland which is a very specific documentary recording that as with some of the above photography at times reflects the contradictory beauty that can be found in images of abandoned examples of people’s industry against a backdrop of nature.