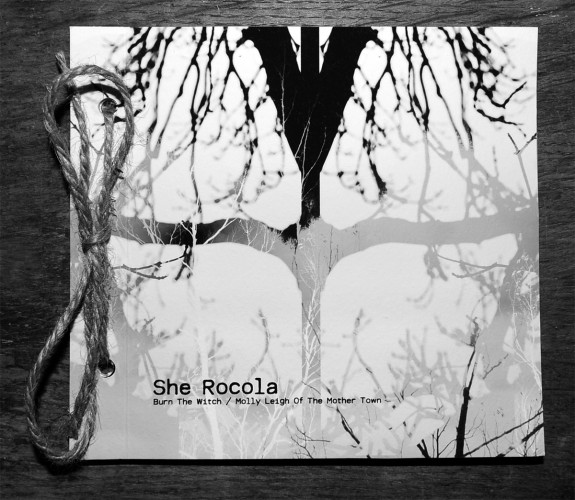 Now, we have something of a soft spot for this here track and its companion.

In amongst the A Year In The Country releases it may well be a turning down more overtly folk horror (or should that be folk noir, more of which in a moment?) pathways, accompanied by the phantasmagorical remembering of childhood rhymes to be found in Molly Leigh, which is inspired by Ms Rocola’s…

“…personal folklore and that of her home town; childhood experiences of chasing her playmates around Molly Leigh’s grave and the rhymes which accompanied such games. It is an audiological conjuring of hazy, sleepy small-hours memories and dreams from those times.”

Transmissions sent, received, transmitted: the single garnered some rather fine considerations and scribing, a pairing of which are below:

“She Rocola conjures one the most bewitching releases of the last few months… Burn The Witch” begins with urgent stabs and wails of violin and an immediate sense of foreboding. Rocola intones the witches’ fate, vocal harmonies layering ghostlike amidst the baroque setting, her voice endlessly repeating “make her leave my mind”… a subtle but powerful spell. Inspired by “childhood memories and by formative viewings of late-night folk-horror films from in front of and behind the sofa” this is a hallucinatory and haunting piece of folk noir.

“Second track “Molly Leigh Of The Mother Town” is a music box filled shimmer of dread, acoustic guitars casting spectral shadows under the repeated nursery rhyme mantra of the verse. The voice of the witch speaks, intertwining with the sounds of the children’s twisted game. It is both utterly unique and completely hypnotic; this is gothic folk like you have never heard before.”

By Grey Malkin (of The Hare And The Moon) at The Active Listener.

“… few 45s of the last couple of years can catch up with this one… Molly Leigh Of The Mother Town” is the kind of nursery rhyme you never learned at your mother’s knee, but which buried itself in your memory regardless, to peer out of the soil whhile you’re hopscotching past, and wrap bony fingers round your ankle; “Burn the Witch” is freakish fiddles (by Andrea Fiorito) that scratch behind She’s icy vocal and spectral harmonies, a Hammer film condensed to two minutes of sound and effects.”

By Dave Thompson (author of many a tome or two or hundred or so) at Goldmine.

Burn The Witch wanderings around these parts: 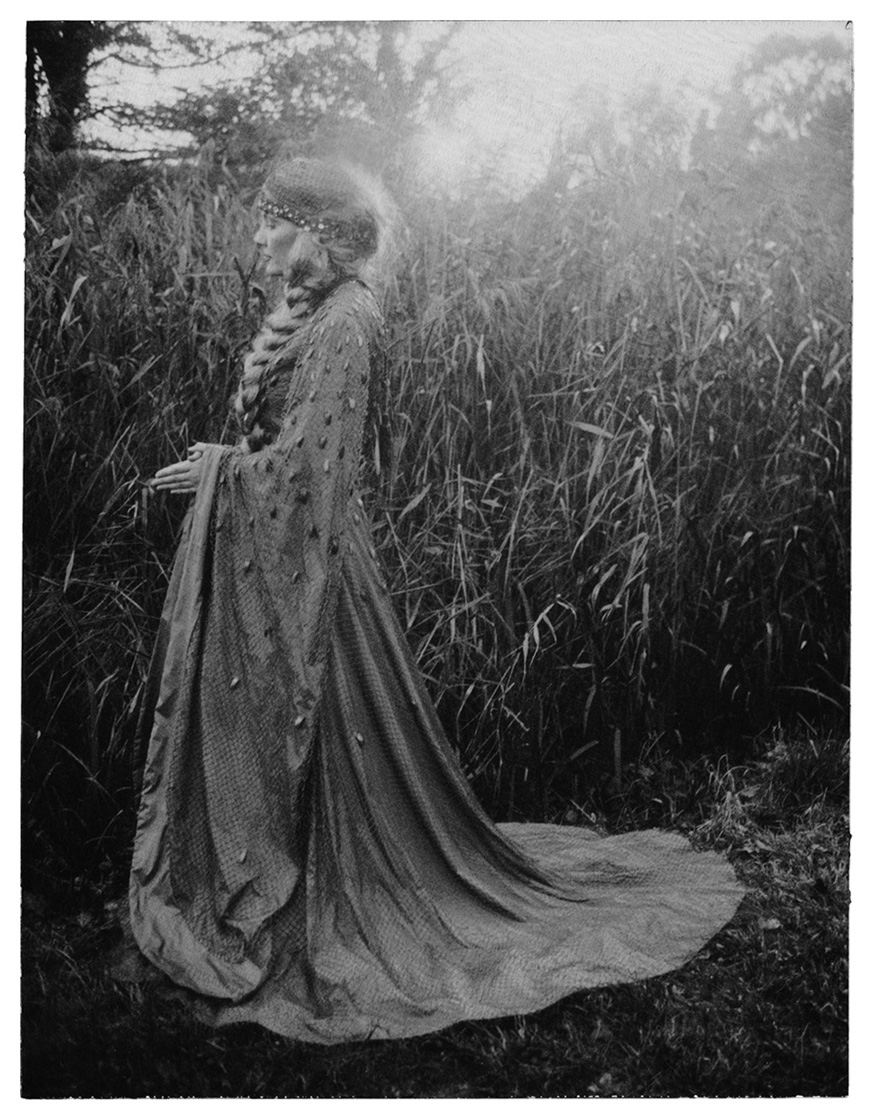 Day #39/365: Burn The Witch by Ms She Rocola, a stately repose amongst the corn rigs and Victorian light catching

The Victorian light catching in question is the photograph of Ms Rocola that accompanied the release, by Zoe Lloyd:

“…a stately repose amongst the rural landscape and corn rigs, a folkloric meandering through the textures of Sarah Moon and Deborah Turbeville (this particular entrancing of the soul was created using light catching techniques from previous eras – traditional wet plate to be more precise)...” 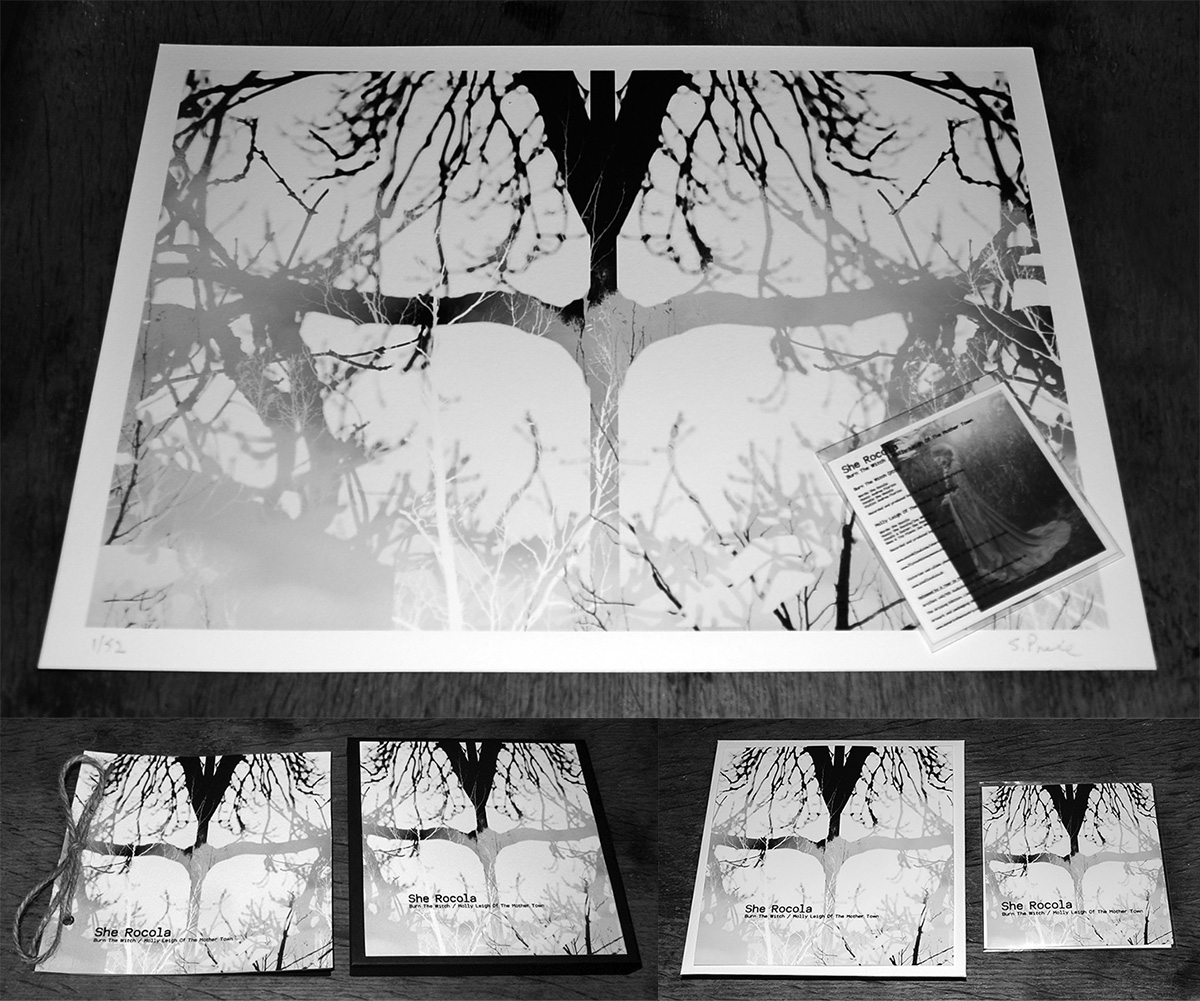 Recorded and produced by Joe Whitney and Andrea Fiorito.

Elsewhere in the ether: She Rocola. Mr Whitney.