The 1981 British television series Day of the Triffids is an adaptation of John Wyndham’s 1951 post-apocalyptic novel, in which the vast majority of humans are struck blind after watching a night-time cosmic light show/possible meteor shower and they become prey for triffids – large carnivorous plants with the ability to walk and kill which had previously been bred because they produced high quality oil.

It is different from much of 1960s and 1970s cult British science fiction and fantasy television that has gained a cult following in that the viewer does not need to “recalibrate” themselves to a different pace of storytelling in order to watch it and appears to be nearer in that sense to contemporary drama (albeit without the more frenetic, almost jump cut pace of some such programmes). In this sense it stands alongside the likes of the final series of Quatermass (1979) and Sapphire & Steel (1979-1982) and watched today the series stands the test of time as intelligent, entertaining and at points terrifying science fiction. Also it is in contrast with some modern television and cinema in that it achieves this without resorting to being out-and-out gratuitously viciously nasty or the heavy use of gore.

The unsettling nature of the series is present from the start; the introductory sequence features heavily colourised/posterised faces set against a blank black background look up at the meteor shower as dread filled choral music plays and suddenly the sting of a triffid strikes a terrified woman. When the triffids later break free and begin hunting humans they do not look perfectly real in a polished contemporary CGI manner but they are still convincing and despite their lumbering quality they invoke a sense of genuine dread. Alongside this the series unsettles via its depiction of just how fragile society is as over night everything changes and immediately crumbles into chaos.

(As an aside the triffids seem possessed of a form of intelligence, despite not having a brain in any animal organ-like sense and they herd their human prey and are even able to observe behaviour and plan their attacks accordingly. This depiction of plant intelligence brings to mind the 2014 documentary The Creeping Garden, in which slime moulds appear to make decisions when seeking food supplies etc, although the organisms shown in that film are not predatory or overtly threatening.) 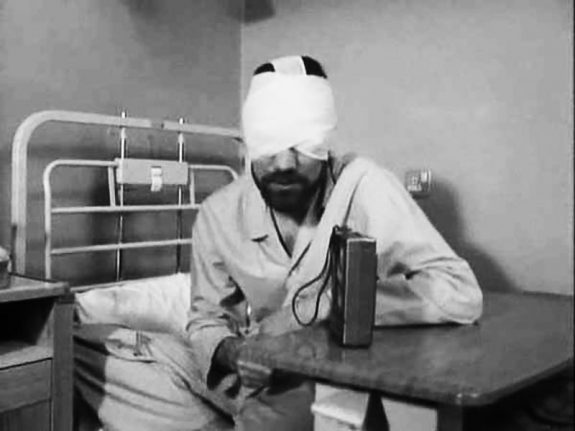 Bill Masen is the lead male character in Day of the Triffids, a former triffid farmer who has retained his eyesight due to his eyes being bandaged after a triffid attack and so he did not see the meteor shower. The early scenes show him waking in his hospital bed with the bandages still in place and he slowly realises that something is wrong. When he removes his own bandages and steps out into the corridors and then the streets of London the realisation of what has happened begins to hit him; that apparently now nearly everybody in the world is blind and that society has essentially collapsed – the once busy city streets are pictured at times as being eerily quiet apart from a few staggering blind people.

(These earlier sections seem to be a forebear of similar early scenes early in Danny Boyle’s 2002 post-apocalyptic zombie film 28 Days Later, where a courier wakes from a coma alone in a hospital bed after a catastrophic event and when he wanders London’s streets they are both empty and filled with the signs of that catastrophe. In that film eventually the zombies starve once they have exhausted the food supply of uninfected humans, which calls into question what will happen to the triffids once they have hunted and consumed all the more easily obtainable food supply of say their human and domestic pet victims.) 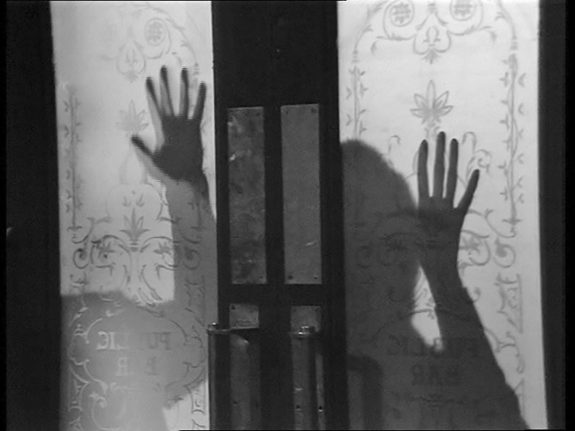 In a number of senses the sighted, while more able to avoid triffid attacks, become both hunters and prey – through finding and using weapons they are able to, if not always hunt, then at least resist the triffids while they also become prey for the blind and those that wish to help them and in one claustrophobic scene a group of blind people surround Bill and his companion’s car and take up a cry of “Get him out. Get him out. We want him.”.

One of the truly overwhelming aspects of the catastrophe is the sense of how few of the blind people Bill will be able to help; when he hands a blind old woman a can opener and a can of beans in the street there is the sense that he is just putting off the inevitable, only really helping her for just another day or so. At one point he is press ganged into helping a group of blind people but he tells them that he is just a drug that you give to somebody to keep them going for a bit but ultimately cannot save them.

Despite its premise the series is not overly or constantly action filled and at times it is nearer to a chamber piece, featuring the characters in a room talking and discussing the situation, problems etc. The series has a strong emotional pull and resonance and some of the most upsetting scenes do not involve the triffids but rather when the blind characters desperately try to convince the sighted to stay with and help them, particularly as ultimately those who can still see can do so little and/or survival imperatives dictate that they must leave.