Generally the star vehicles, which included a motorbike, a car and two helicopters, were technologically advanced and used by the forces of good against the bad guys to variously uphold law, order and justice.

Although to a degree they are fetishised – in the sense of being objects which while technology orientated have an almost magical ability to protect and aid their owners/users – only the car in Knight Rider is overtly anthropomorphised. However while possessing a form of artificial intelligence and appearing quite human through its use and understanding of spoken language and its almost gentle persona, at heart it is still only a machine, a piece of advanced technology.

Set in 1978 it tells the story of Arnie, a teenage misfit/school outsider, who buys and restores a 1958 Plymouth Fury car named Christine, which while essentially technically just another assembly line car turns out to be unexplainedly possessed and have a will and mind of its own and is bent on destruction, revenge and the complete unquestioning devotion and corruption of its owner.

(King chose this particular car as he considered it a “forgotten car” and because at that point it did not have a legend attached to it – i.e. it had not been used in iconic film, music, literature etc; it was a relatively rare care as less than 5,500 of the 1958 model were made. After an extensive search and advertising campaign 23 were found for use in the film, although only 16 were used for filming, with the others being used for parts. Other makes and models of car were also customised to make them look more like Christine.) 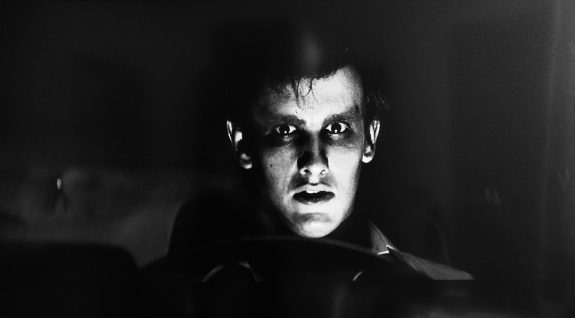 Here the vehicle is thoroughly anthropomorphised and becomes another individual with human like dark desires and intentions, with the film essentially revolving around this aspect and its new owner’s increasingly destructive attachment to and connection with it:

“At its core, Christine taps into our fundamental curiosity and need to explore the realms of anthropomorphism, once traditionally ascribed only to other living creatures, but more recently accredited to non-animate objects in our modern and post-modern world.” (Nick Zegarac, Nixpix website.)

The first time Arnie sees and “meets” the car he immediately anthropomorphises it;

The car is filmed in such an aesthetically appreciative manner that it could well be taking notes from Kenneth Anger’s fetishistic (in both the attributing magical powers and sexual sense) Kustom Kar Kommandos short film from 1965, in which a young man gently and lovingly buffs an already gleaming customised hot rod. That film is soundtracked by the Paris Sisters’ version of Bobby Darrin’s late 1950’s love song “Dream Lover” – which provides a further aesthetic connection between the films as Christine’s radio only plays 1950s rock’n’roll.

As Arnie restores the car to its former head turning, chromed and red painted glory, it also acts in a manner which reflects both the above meanings of fetish; the car becomes Arnie’s one true sweetheart, trumping and competing for his feelings over his actual girlfriend.

Also as he transforms the car it seems to transform him into a black wearing, 1950s Johnny Cash or Rebel Without A Cause James Dean-esque style bad boy. Accompanying this transformation Christine appears to take revenge on those who threaten the car and by exension him – there is a symbiotic melding of them and they effectively become an interdependent couple, with at one point Arnie saying to Christine:

“We’ll make it better, huh. They can’t hurt us any more. Not if we work together.”

Until very nearly the end of the film it is not clear whether Christine is acting independently when she drives and hunts down her tormentors or whether Arnie is at the wheel as one half of a murderous couple; he is not seen entering or leaving the car before such actions, has an alibi to show he was elsewhere, each time she undertakes such an act her windows are blacked out so the viewer cannot see if there is a driver at the wheel and to further confuse matters at one point Christine is shown to autonomously attempt to deal with her competition and do away with her Arnie’s girlfriend.

It is only once Arnie truly commits emotionally to Christine that the car appears to also fully reciprocate and its super/preternatural abilities become more overt, which happens after the school bullies have smashed her almost beyond repair. Arnie is shown facing her and in highly sexual/emotional manner says “Okay. Show me.” At which point there is a classic John Carpenter soundtrack synth stab and the car literally flexes her muscles and miraculously restores her bodywork and “sensuous” curves back to normal.

(As an aside as he did on a number of his films John Carpenter created the original score for Christine alongside repeat collaborator Alan Howarth.)

Although an inanimate object rather than conventionally alive Christine appears to have a brooding malevolent and evil presence and her apparently autonomous actions are generally predatory.

As there is no backstory in the film which explains the car’s possession (there was in the original book but it was removed for the script), its sentience and autonomous abilities appear to be nearer to a form of unexplained magical realism than to be rooted in the supernatural. At the start of the film the car is shown on the assembly line, just another car, albeit more vibrantly painted in striking red next to the other car’s beige. That the car was “born” a bad seed is depicted as she assaults one factory worker, trapping his fingers in her bonnet and most probably murders another who does not treat her interior with respect and that is as far as any source of her possession is explained.

This association between the car’s malevolence and a particular era’s music reflects a difference from contemporary cultural nostalgia for the 1980s, which often tends to look back with a certain rose-tinted, selective starry-eyed affection. Christine’s look towards the 1950s seems to take a considerably more darkly refracted view of an earlier period and to ultimately reject related nostalgia; after going on a murderous spree Christine is eventually crushed and apparently defeated, although she appears to have one last breath and statement in her as “Rock and roll is here to stay” keeps playing even when the radio technically must have been destroyed.

The final line in the film after the car’s apparent destruction is “God, I hate rock’n’roll” but at the very end there is a slight movement from Christine, possibly indicating life and perhaps suggesting that the sins and sinfulness of rock’n’roll is indeed “here to stay” – although a sequel was not forthcoming, so this has been left open ended.

(Postscript: in 2017 John Carpenter directed a kind of sequel or at least revisiting in the music video he directed in 2017 for the re-recorded Christine theme which featured as part of his Anthology Movie Themes 1974-1998, for which he created new versions of various of the tracks he had previously created for his film work.)