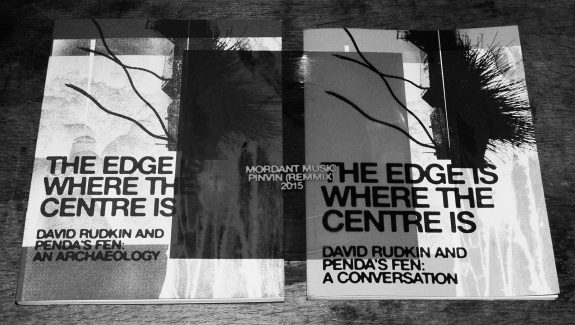 The Edge Is Where The Centre Is is a book that focuses on Alan Clarke and David Rudkin’s 1974 British television play Penda’s Fen.

Aside from the intriguing and multi-layered nature of Penda’s Fen, the book is a fascinating and rather lovely cultural artifact in itself – and a good example of the way in which a relatively small core of television and film work from previous decades which focuses on for example the flipside and undercurrents of the landscape and folklore continues to inspire contemporary work and projects, which draw inspiration from that core but which can also be appreciated, exploratory and inspirational in their own right.

The book has been released in two editions, both prior to the play’s official DVD/Bluray restoration and release by the BFI in 2016, at a time when it was generally only viewable as a not-officially sanctioned multi-generational blurred digital copy online or at one of the rare public screenings.

In the first edition of the book this was accompanied by several articles, a short biography of David Rudkin, a synopsis of the film and a screening history.

(Above is the “short” synopsis of the play – which considering the multi-layered nature of Penda’s Fen rather surprisingly captures and represents its themes concisely in but a few words.)

The second edition has been considerably expanded, redesigned and at times rewritten to include the core conversation, articles, the synopsis etc but with the sections now numbering fourteen, the addition of a flexi-disc by Mordant Music and the subtitle changing to be: David Rudkin and Penda’s Fen: An Archaeology. 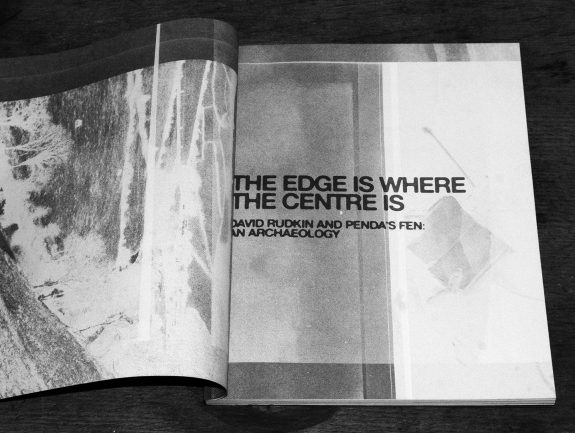 Both books were designed by Rob Carmichael of SEEN and are collages that seem to reflect a sense of a multi-layered, spectral or hidden/occult exploration of the landscape.

This is enhanced by them having been printed using the Risograph process, which utilises copying machines which produces print output that seem to exist in its own hinterland somewhere between digital photocopying and hand screenprinting and has a particularly appealing tactile, matt quality. 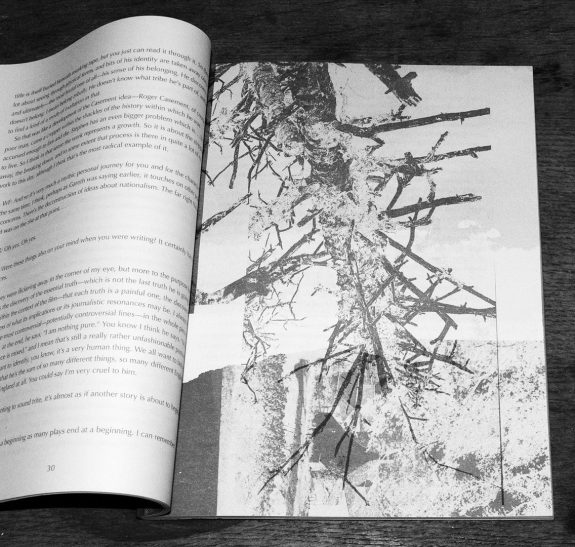 That spectral/hidden sense of the landscape is one of the core themes of the book, with it taking Penda’s Fen as something of a starting point or wellspring for what a number of year/decades later has grown to be a loosely defined cultural exploration of “weird”, “wyrd” or “eerie” Britain – an otherly, at times hauntological unearthing of rural pastures and interests.

(A number of reasons for such cultural phenomena and interest could be put forward, one of which – as referred to in a quote by Robert Macfarlane in the book – is that it is an attempt to make sense, explain, account for and possibly act as a respite/allow refuge from/act as a bulwark against the current dominant capitalist system: in part a utilising or reconfiguring of the spectral or preternatural as a form of expression, exploration and escape from related turbulence and pressures.)

They seem to form a continuum of the unearthing of the weird, wyrd, eerie, occult, otherly, hauntological landscape of Britain by Texte und Töne and the Colloquium for Unpopular Culture which has taken in public events and Risograph printed publications.

These include the book The Twilight Language of Nigel Kneale, which was released to mark the event A Cathode Ray Séance: The Haunted Worlds of Nigel Kneale and The Stink Still Here book which is a conversation between Paul Myerscough and David Peace which centres around his novel GB84 and The Stink Still Here: The Miner’s Strike on Film event, both of which focus around the 1984-1985 British Miner’s Strike. 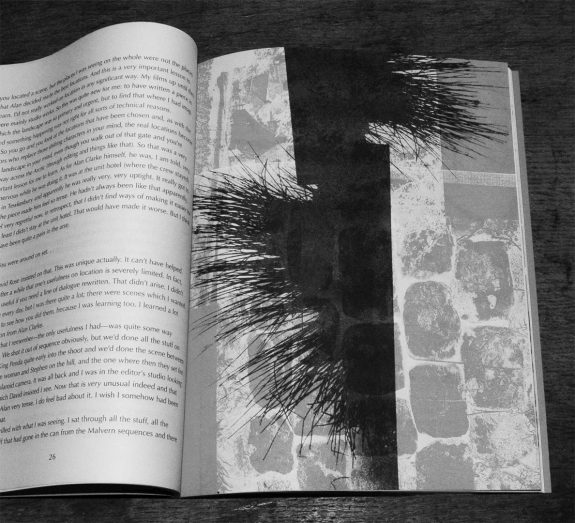 The Edge Is Where The Centre Is books are edited by Gareth Evans, Will Fowler and Sukhev Sandhu, who aside from taking part in the core conversation, all also have articles in the book/s.

Sukhev Sandhu’s “You’re Like The English, You Have Foreign Parents” article positions the film in amongst an interior English countryside that is often unknown or unexplored territory:

“If cities are in the ascendant, it’s the countryside that is increasingly terra incognita in the public imagination. British people, weaned over twenty years on cheap international travel delivered by budget airlines, are as likely to be familiar with Spanish and Greek pastures as they are with their own national interiorities.”

William Fowler’s Deep Dreaming article considers the countryside as a focus for exploration within film in the 1970s, placing Penda’s Fen within a background of the likes of Psychomania, Children of the Stones, The Ballad of Tam Lin, Winstanley, The Wicker Man and the work of Derek Jarman: 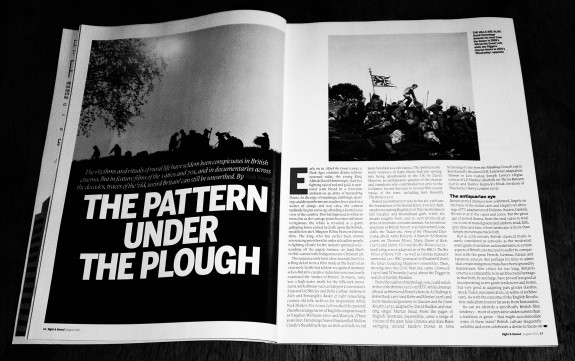 As an article it explores not dissimilar territory to that which he, alongside Rob Young, wrote about in the The Films of Old Weird Britain issue of Sight & Sound magazine in 2010 and indeed could well be a companion piece to their articles in that issue.

Indeed “open-up portals between different time zones” implies a not too dissimilar sense of cultural exploration as Rob Young has referred to as a form of “imaginative time travel”.

If you have never seen Penda’s Fen or are not likely to watch it, the two editions of The Edge Is Where The Centre Is are able to stand alone as fascinating explorations and documents of the underlying patterns, myths and stories of the landscape and rural areas – books which, as Sukhev Sandhu says of Penda’s Fen, are:

Elsewhere at A Year In The Country:
Day #4/365: Electric Eden; a researching, unearthing and drawing of lines between the stories of Britain’s visionary music
Day #15/365. The Twilight Language Of Nigel Kneale
Day #80/365: The Films Of Old Weird Britain… celluloid flickerings from an otherly Albion…
Day #143/365: Central Office Of Information + Mordant Music = MisinforMation
Day #191/365: Penda’s Fen; “Cherish our flame, our dawn will come.”
Wanderings #36/52a: The Wicker Man Revisited / Refreshed – The Long Arm Of The Lore