Some further reviews and broadcasts of The Quietened Cosmologists album, which is:

“…a reflection on space exploration projects that have been abandoned and/or that were never realised, of connected lost or imagined futures and dreams, the intrigue and sometimes melancholia of related derelict sites and technological remnants that lie scattered and forgotten.” 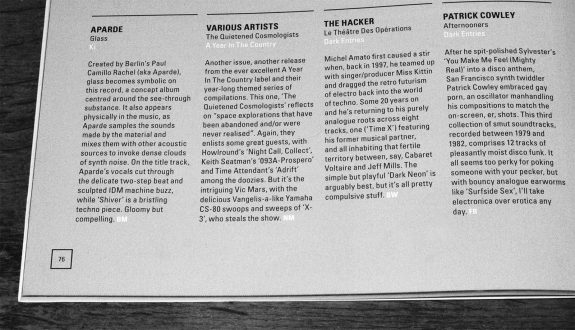 …that issue has a classic 1950s/1980s style 3D cover complete with red/blue anaglyph glasses, which is a nice touch and something of a nod to the lineage of 3D now that one of the latest incarnations of 3D in the home is largely coming to an end as manufacturers have mostly stopped making 3D televisions.

The issue is available here and as part of a vinyl bundle here.

Next up is Dave Thompson’s review at his Spin Cycle column on Goldmine magazine’s site:

“…a rumination on what might have been – the space missions that were promised, that were planned and then abandoned, or that never got off even the figurative ground in the first place… Disconnected voices from impossible distances, radio signals, muted melodies, ambitious hope and scientific daydreams…”

“Keith Seatman has beats a plenty like a wonky Kraftwerk after they have discovered Steve Birchall’s epic Reality Gates album, proper space rock… Listening Center  take us to a strange ticking otherworldy place, a place that feels at once vast and infinite, a haunting slice of space music… The record ends with Landfall at William Creek, David Colohan’s spectral hammered dulcimer peels away into the inky vastness of space, a beautiful end to a fine record.”

We Are Cult included the album in a review round up

“…it’s a cracking collection of electronica… about the abandoned, uncelebrated, and unrealised attempts to reach the stars… David Colohan’s desolate Landfall At William Creek perfectly evokes lonely space junk rusting in the wilderness… Keith Seatman’s 093A-Prospero is best described as a sort of interstellar Lieutenant Pigeon.”

An interstellar Lieutenant Pigeon? Well, count me in (!).

Visit the reviews round up here.

Originally broadcast on Asheville FM, browse the playlist here and the show’s site at the radio station here.

In a rounding the circle manner, some time A Year In The Country fellow travellers Pete Wiggs and James Papademetrie of the “phantom seaside radio” show The Séance have included David Colohan and Field Lines Cartographers tracks on two of their show.

First heard via the airwaves at Radio Reverb and Sine FM, the episodes and their playlist’s are archived here and here.

In a further rounding of the circle manner, Mat Handley of Pulselovers played David Colohan, Time Attendant and Vic Mars’ tracks on his You, the Night & the Music show.

That show was also originally broadcast on Sine FM. Visit the online archive for the episodes here and here.

Originally on Reform Radio, the show is archived here and here and the show’s blog can be found here.

In an interconnected manner, Wyrd Daze included three tracks from the album on their Samhain Seance 6 : Triffid Witch mix, alongside tracks from Front & Follow’s 10th anniversary compilation Lessons and their Blow series, plus the likes of Leyland Kirby and The Haxan Cloak.

A tip of the hat to everybody involved. The support is much appreciated.

Further details can be found around these parts here, at Bandcamp here and can be previewed at Soundcloud here.