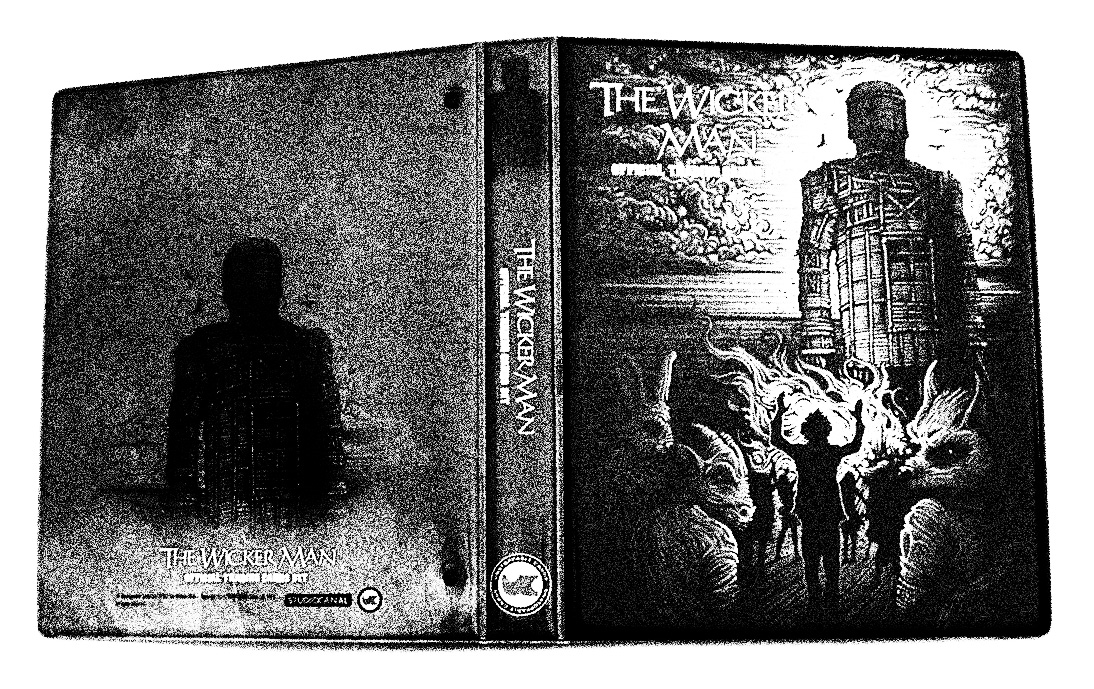 And when wandering various pathways that began with Fractures there was just such a further morning.

The Wickerman has become such a “cultural behemoth (monolith? megalith?)”  that it can be a little difficult to know how to approach it.

I think possibly one of the reasons for it gaining such stature is that it is probably one of the only examples of otherly pastoralism/folklore inspired culture that is both a rather quality product and which has genuinely crossed over/become a part of wider pop/popular culture.

Something of a unique beacon then (in more ways than one).

Back during that previously mentioned early morning visitation, I considered how all the various encasements, formats, reissues etc of such story telling would one day potentially become lost, or at least the ability to have them tell their tales may well, as the machines that play such things slowly expire and disappear from view/use.

…all of which brings me to a more recent stilled encasement.

Back when, a paticular note of childhood was the collecting of themed stickers in especially produced albums.

These would be say of a particular television series and for example five would be bought unseen in sealed packs.

Each sticker had its own place in the album and as these came to be filled, by the unseen/sealed nature of the packs, you may well buy a pack and find that there were none in it which you still needed.

Hence a “swapsies” eco system would develop in the schools of the land.

Such things are now as likely to be collected by “grown ups” as children.

Which leads me to The Wickerman trading cards that were released a while ago.

…that is just the “base” set. There are a dizzying number of other collectible items including rarer chase cards, promotional cards, autographed cards, rarer autograph cards, film  cells, sketch cards, boxed collections, binders, plates used to print the cards, autographed print plates, master sets, mini master sets and so forth.

If you flip them over, they also join together to form a particular image – further grist to the collectors mill.

Where to start and end would be something of a problem.

The binder for collecting the cards put me in mind of the film/television photo novel tie-ins that used to be released and which I am rather fond of.

Essentially comic books that used stills rather than drawings. Popular on the continent where they were also known as fumées or ciné-romans.

I often find myself hankering after a book collection of stills from a film if I’m particularly drawn to it but it is something that rarely seems to be done (I expect it would be a little costly), particularly for more cult/independent films – these Wickerman trading cards when placed in a binder being about the closest I have found myself perusing of late.

An exception could well be the book version of Chris Marker’s La Jetée – which has parallels with The Wickerman in that it takes a nominally genre fiction and wanders somewhere else altogether with it – although in a way as that film was made up of a story created from still frames (rather than seamlessly flickering ones), it was already a form of photo novel / fumée / ciné-roman.

The source of said trading cards (although there may well be something else there now). A dizzying array via the pecuniarised modern day version of swapsies. Stilled gathering and collecting from around these parts: Day #345/365: Photo romans and a lightness of touch.