File under: Trails and Influences. Other Pathways. Case #27/52.

“He who fights too long against dragons, becomes a dragon himself.“

“Death approaches! We are all mortal again! Now we can say ‘yes’ to death, but never again ‘no’. Now, we must make our farewells: to each other, to the sun and moon, trees and sky, earth and rock, the landscape of our long waking-dream.”

“And I have looked into the face of the force that put the idea in your mind. You are bred, and led, yourself.”

But I think this is one of the most genuinely strange of them all, particularly as it appears to be quite a big budget, star scattered production (I guess this is what happens when film studios give open-ended creative freedom to people after they’ve made a big hit film – the director, John Boorman, had been given that pass after the success of his city slickers up against the folk from the woods and swamps film Deliverance)… to use a phrase from the film itself, this is one of those times when popular culture goes “renegade”…

It feels like a genuinely psychedelic and dreamlike (or to use the more academic, hauntology text appearing phrase, oneiric) experience in many ways… a dissonant, challenging blockbuster/spectacle film in a way, full of “I can’t actually believe that this was allowed to come to the big screen” moments, questioning of societies actions, elements of 20th century fairy tales and philosophy amongst, well, the thigh length boots, nudity, guns and entertainment. 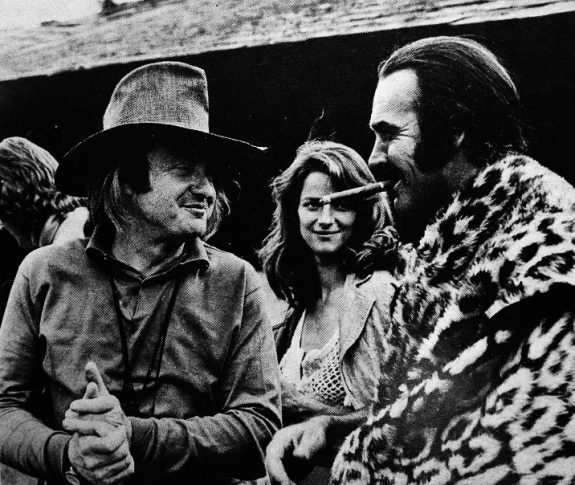 (Reading the film’s director talking about its making, there was possibly a literally psychedelic element to its production; “Um, it was the 70’s, and I was doing a lot of drugs. Frankly, even I’m not entirely sure what parts of the movie are about.” All the better for that lack of knowing and over exposition…).

“Forcing the hand of evolution…” 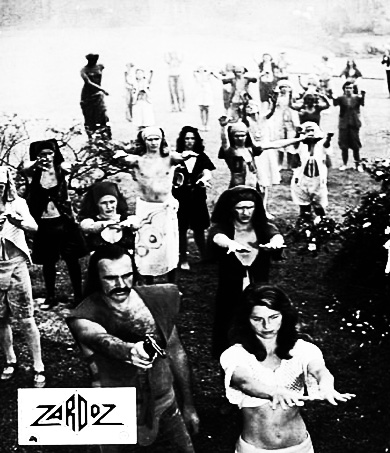 And it’s one of those pieces of celluloid where if, as film critic Mark Kermode says in his book “The Good, the Bad and the Multiplex: What’s Wrong with Modern Movies”, big budget escapades actually rarely lose money in the long-term then it makes me think it’s a shame that such dedicated, off kilter, visions aren’t allowed to be realised a bit more often. Or again to semi-quote Mr Kermode, if you’re going to make these big blockbusters and they probably won’t lose money, why not make them good?

“You have penetrated me. There is no escape. You are within me. Come into my center… Come into the center of the crystal.”

The plot? Well, the rich and powerful have secluded themselves behind an invisible barrier in an earthly paradise of bountifulness and eternal life, while the rest of the world has turned to scrubland and society has crumbled and reverted to a more or less medieval way of life. Out in those wastelands are exterminators who literally cull the population at the orders of the secluded powerful, who supply them with weapons to carry out their bidding, which are delivered by a flying, tribute collecting stone godhead… but then one of the exterminators manages to gain entrance to the endless idyll… and well, I don’t want to give too much away if you’ve not seen it…

“I looked behind the mask, saw the truth.”

The secluded paradise is a curious mix of advanced technology, new age-isms and a kind of indulgently folkloric way of life… these are dancers at the end of time (to quote Michael Moorcock in a book series with not too dissimilar themes in part of a privileged elite living in a bubble world of luxury and indulgence at the expense of the rest of the world); but it is an idyll which is degenerating and many of those who have been dancing its slow, indolent, self-regarding waltz for hundreds of years are slipping into a literally catatonic state of apathy or have to come to just wish to be able to end their unending lives.

“I am innocent of psychic violence.”

It’s a film full of beauty and brutality (and Brutals); lithesome eternals wander the bountiful lands in flowing semi-transparent garments, all democratic, liberal (and conformistly oppressive) decision-making, in stark contrast to the hirsute, futuristic Mexican fetish banditry of the interloper from the wastelands who breaks into their lands, bringing with him action, virulent fertility and the violence of change…

“The vortex is an obscenity…”

I would recommend a trip into this particular vortex and a seeking out of the tabernacle with Zed or as one of the taglines said step “Beyond 1984, Beyond 2001, Beyond Love, Beyond Death”…

Other trails and pathways: talking of beyonds, if you should be drawn to the lysergic otherlyness of Zardoz then you may wish to take a wander amongst the arborea of Beyond The Black Rainbow, where I think you may find traces of the vortex…

..or to wander slightly off track, join in the Future Dance and enjoy the critiquing of the echo chamber conformity of social media popularity rituals via the App Development and Condiments episode of criminally under-exposed (on these shores at least) series Community and its affectionate tribute to such 1970s sf dystopias as appear on this page. Highly recommended and makes me chuckle quietly just to think of it. 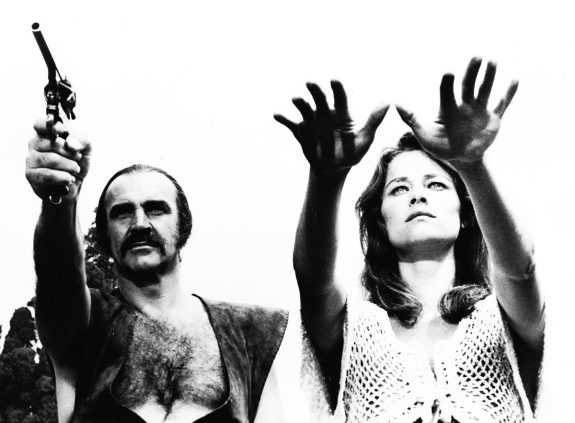