A while ago I came across a Lego toy construction brick recreation of posters for Ben Wheatley’s film adaptation of J. G. Ballard’s High-Rise novel.

When I first stumbled upon them I thought they had been created in a one-off manner not dissimilar to the way in which the internet now seems to be fairly full of alternative movie posters and there are Lego recreations of nearly everything under the sun.

Further investigation revealed that they are part of a large project where at the request of the High Rise film’s Twitter account somebody working under the title Lego Loki created 1188 images using Lego to illustrate every scene from the novel.

(Actor Tom Hiddleston plays the main character in High-Rise and also the part of “evil” God Loki in the Marvel Universe films. The Lego figure of Loki is used as a recurring alter-ego by Lego Loki, hence the name.)

The shape of the tower block in the above masthead from the project’s website brings to mind both the aforementioned previous era’s surreal/left-of-centre science fiction and fantasy cover art and some of the more outré Brutalist architecture designs which can be found in Peter Chadwick’s This Brutal World.

The project can be viewed on the Brick High-Rise site and the resulting work is a startling labour of love that on viewing due to the use of Lego seems to introduce both a humorous element and also to add an extra layer of unsettling and possibly inappropriate transgression due to this ordinarily rather transgressive tale being told via the use of what, despite its increasing cult and adult users, is still at heart a child’s toy. As a viewing experience it is difficult to tell whether to be intrigued and/or at least a little repulsed.

Which I suppose could equally be applied to both the original novel of High-Rise and Ben Wheatley’s film adaptation.

Apparently the eventual budget for Brick High-Rise was £192.56 but that only included items specifically bought for the project and Lego Loki says on the site that he/she already owned many of the necessary bricks. Even allowing for that, it is still considerably cheaper than the over six million pounds which Ben Wheatley’s film adaptation cost.

You could say that the use of pre-owned Lego items tips the balance in Brick High-Rise’s favour but Ben Wheatley’s High-Rise made use of actual buildings and Brutalist architecture, so swings and roundabouts really.

Still I suppose Brick High-Rise contains only 1188 stills as opposed to with a run time of 1 hour an 59 minutes, at 24 frames per second Ben Wheatley’s High-Rise has around 171,360 frames. 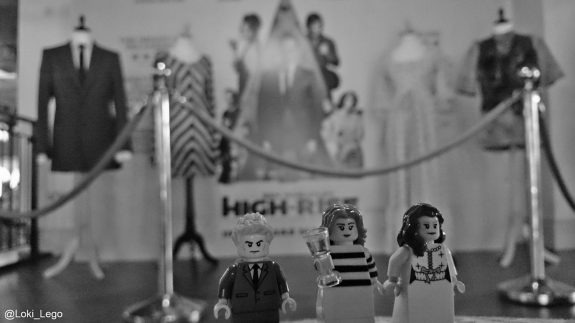 The Brick High-Rise site is well worth a wander around as alongside the Lego recreations of scenes from the book it also includes posts on, amongst other topics, Lego Loki’s visits to Ballard Day at the British Library, an exhibition of costumes from the High-Rise film and some of the architecture which is said to have inspired the novel (all of which include photographs with Lego Loki’s figures in situ) and “How to Create Your Own Custom High-Rise Lego Set”.

Lego Loki created custom High-Rise Lego kits for the DVD release of the film, which were included in promotional hampers. Also included in promotional packages was a bottle of champagne, which is a reference to the consumption of the drink in the film and also possibly to the architect Erno Goldfinger whose Brutalist architecture buildings, including the 24 storey Balfron Tower, is said to have inspired the original novel.

For around two months Goldfinger and his wife lived in Balfron Tower, which he has written was so that he could “experience, at first hand, the size of the rooms, the amenities provided, the time it takes to obtain a lift, the amount of wind whirling around the tower and any problems which might arise from my designs so that I can correct them in the future”. It was but a brief experiment however as after that they moved back to their home in a considerably more conventional modernist 3 storey home in Hampstead, which is a leafy affluent area of London.

Curiously while living at Balfron Tower Goldfinger held champagne soirees which he invited the residents to floor-by-floor, echoes of which can be found in the hierarchical and socialising aspects of High-Rise.

Choosing to live in his tower block creation reflects similar actions by Anthony Royal, the architect of the tower in High-Rise, who is described rather appositely by Oliver Wainwright in a piece for The Guardian newspaper’s website as:

“…the perfect symbol of the megalomaniac modernist architect. The villainous protagonist of JG Ballard’s 1975 novel High-Rise presides like a puppet-master over his ‘crucible for change’, a brave experiment in vertical living that quickly unravels into a concrete dystopia, driving its residents to madness in the floors beneath his feet.” 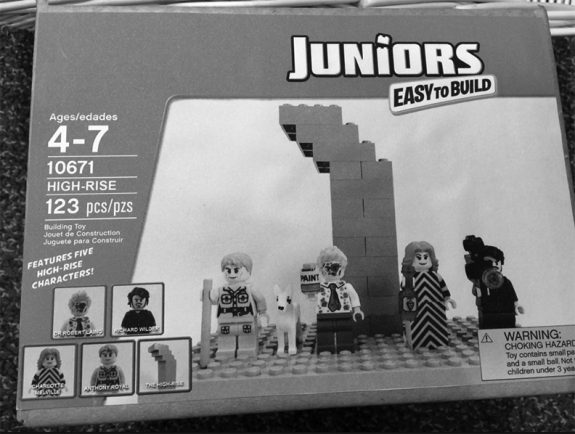 The High-Rise custom Lego kits have a legitimate “small parts” safety hazard notice on them and also a more humorous “Ages 4-7” recommendation for its intended audience, as an actual Lego kit would have. Maybe “Age 47” would be more appropriate? As referred to earlier, this is a further aspect of a project that leaves the viewer potentially both intrigued and a little unsettled. 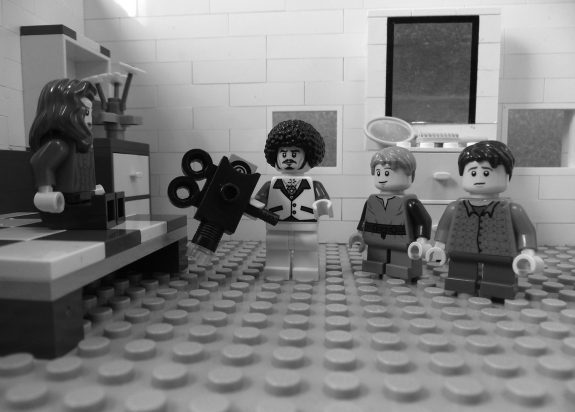 Since the Brick High-Rise project was completed there has been a limited edition steel book Blu-ray of High-Rise which used Lego in its cover art; an interesting additional offshoot could be a printed book of the Brick High-Rise photographs, although I expect that would require a considerable amount of wrangling with and leeway from J.G. Ballard’s estate.

As a project it could be filed alongside the likes of Zupagrafika’s construction kits of Brutalist architecture buildings, HeyKidsRocknRoll’s dioramas and Press Pop figures of electronic music pioneers Delia Derbyshire, Daphne Oram, Bob Moog and Raymond Scott.

In terms of their form and construction those dioramas/figures and Brick High-Rise all have their roots in children’s toys but also the Zupagrafika, HeyKidsRocknRoll and Press Pop items seem to focus on and embody aspects of culture which have become totemic signifiers:

“Part of what all such things seem to represent, whether the electronic music innovations of The Radiophonic Workshop… or brutalist architecture, is a sense of them containing some form of loss, of lost progressive futures or arcadic rural dreams and ways of life, of being spectrally imprinted with such loss and a layering of related tales.”
(Quoted from a previous post at A Year In The Country.)

So, aside from just being kind of fun, these are effectively ornamental totems for a certain kind of hauntological viewpoint.