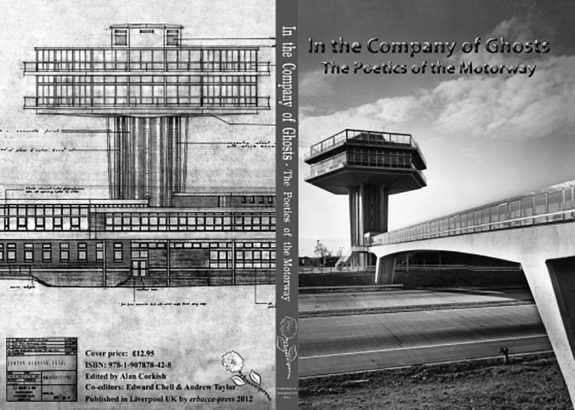 In the Company of Ghosts: The Poetics of the Motorway is an exploration of British motorways via essays, poetry and fiction a creates a form of interdisciplinary psychogeographic literary wandering.

It was published by erbacce-press in 2012, edited by Alan Corkish and co-edited by Edward Chell and Andrew Taylor and featuring work by amongst others Joe Moran, Iain Sinclair, John Davies, Chris MCcabe, John Calvert, Will Alsop and the co-editors themselves.

Co-editor Edward Chell has created work around the road systems and motorways before, including the art and book project Soft Estate which I have previously written about at A Year In The Country and in the Wandering Through Spectral Fields book:

“Edward Chell’s 2013 Soft Estate… takes as its subject matter edgeland places when they are found at the side of motorways. The phrase soft estate refers to the description given by the UK Highways Agency to the natural habitat that the motorways and trunk roads it manages occupy; an often unstopped-on hinterland that most of us only view as a high-speed blur from the corner of our eyes as we travel past these autobahn edgelands…. (his resulting work has) a hauntological aspect in that although they are created in contemporary times, they also seem like documents of modernity’s future and past.” 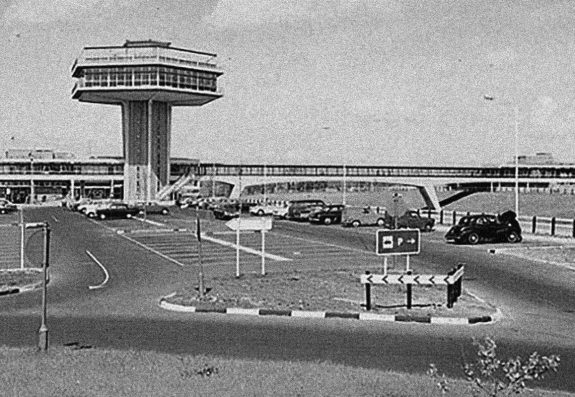 Such themes and what could be called the shape of the future’s past are also explored in In the Company of Ghosts, particularly in the Foreword which is written by Edward Chell:

“The cover image of Forton tower takes us back to the beginning, the days when ‘Britain never had it so good’. Motorways heralded an optimistic vision of progress, of transport for all. Towers, bridges and service stations, two of which have just been listed by English Heritage, define the moment when road travel captured the public imagination and motorways were full of futuristic glamour… Forton Tower is now closed… It resonates with the bittersweet nostalgia of a future ruin.”

The Foreword is somewhat hauntological in that in part it focuses on a sense of the spectres of a lost “modernity”, that “futuristic glamour” that was never reached; once futuristic seeming motorways became just another banal part of day-to-day infrastructure, despite the fact that in some ways they were grand projects which took colossal amounts of will, effort and expenditure to create and maintain, just as a large percentage of the population now carry around high-powered pocket computers, i.e. smart phones which are the result of vast technological advances but they are just another commonplace item without an accompanying sense of far-reaching modernity or futurism.

These are things which are now so omnipresent, in full view and functional that we rarely think of the grandness of them and how they have changed the world and what “ordinary” people are able to do in it, with that change also happening in a relatively short amount of time. Connected to which in the Foreword it is suggested that In the Company of Ghosts is:

“An attempt to focus our readers’ attention on the rich and surprising diversity of our encounters on and with the motorway… Motorways have ploughed through the landscape, changed the way it looks and changed the way we look at and experience our surroundings – through the car windscreen at speed. This book encourages us to Stop, Look and Listen to the unnoticed world in this territory.”

(As an aside Stop, Look and Listen in the above text refers to British road safety instructional advertisements, literature etc from previous decades and in a subtle way its inclusion adds a further layering to the sense of motorways’ spectral or hauntological past, with such things being something of a reference point alongside the likes of Public Information films for hauntological orientated work, theories etc.)

As Edward Chell notes in the Foreword the freeway, the US equivalent of the British motorway, is a “trope at the heart of American culture” and there is an almost mythological aspect to how they are presented but he goes on to say that the British motorway is “a more subdued sibling; less epic, more dowdy, with it’s own peculiarly subversive enchantments”.

Those “enchantments” are listed in the Foreword as including J. G Ballard’s novels Crash and Concrete Island; the first being an exploration of a dark twisted eroticism that focuses on car crashes and the second tells of a wealthy man who becomes trapped on a traffic island after his car crashes through the barriers, who is ignored and unable to summon help from the speeding passers by who must keep up their speed in order to not disrupt the flow of traffic – essentially the main character becomes a prisoner of modernity, its concerns, priorities, systems and infrastructure.

The Foreword goes on to list other literary and creative explorations which indicate “a growing interest in these peripheral and threshold worlds” and “hinterlands”, including Joe Moran’s On Roads, Iain Sinclair’s London Orbital and Paul Farley and Michael Symmons-Roberts’ Edgelands: Journeys Into England’s True Wilderness, with it being suggested that Company of Ghosts is intended to complement these and related texts.

But before I post Part 2, there’s an interesting, informative and entertaining video at the BBC’s website called “The joy of motorway service stations” that I contributed some background information/research to, including work from the A Year In The Country: Straying From The Pathways book. 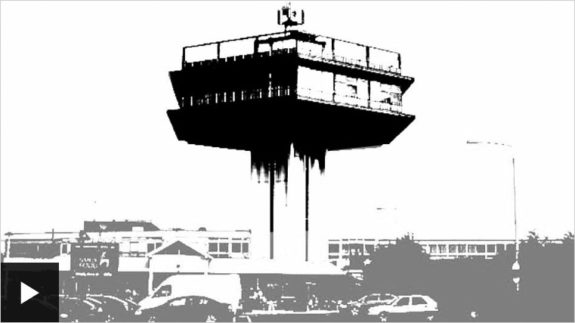 The introductory text for the video is:

“When motorway services were the height of cool: Much maligned and under appreciated – but when the first motorway service station opened 60 years ago, it represented modernist progress.”

It includes the history of UK service stations and features some rather fine archival footage, some of which does indeed evoke a sense of motorways and service stations as sleek, optimistic, modernist places. In parts it’s also rather humorous, such as the archival instructional film warning families of the perils of picnicking in the central reservation, while elsewhere it covers the semi-forgotten history of service stations as meeting places for 1960s rock music performers.

It’s mentioned in the video about how in their early days service stations were “so revered” that you could buy and send postcards of your favourite ones – which seems like a world or more away from the contemporary utilitarian nature of and connection with them.

The video also explores what service stations represent culturally, including anthropologist Marc Auge’s use of the phrase “non-places” to describe “spaces where people remain anonymous and reality becomes distant“, alongside a hauntological sense of lost progressive futures in relation to service stations, “a decline of the modern” and how Forton Tower was once “a symbol of a time when Britain seemed to be travelling down the newly built motorways to a bright new future”.

It’s not all doom and gloom though (!) as towards the end it is mentioned how service stations have tried to improve and expand what they offer, even, in something of a curious contrast considering the nature of them, trying to be ecologically conscious and sometimes containing farm shops and so on, while some “once derided” service station buildings have been granted listed status.

It ends on a look towards the future, wandering if the introduction of driverless cars will make “the need to stop by the side of the road… a quaint relic of the past“, which is an intriguing proposition and indeed future for these once symbols of futurist progression and modernity. 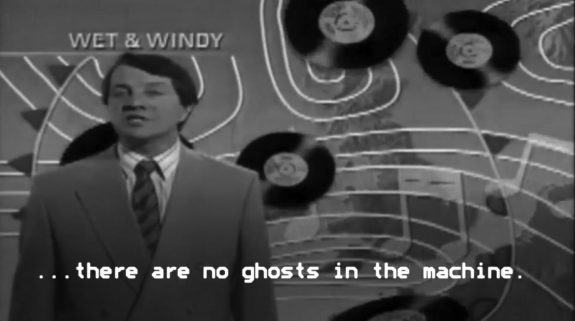 The video was put together by Gary Milne, who works for the BBC Archive and co-curates the Archive’s Twitter page. He also put together the “What is hauntology? And why is it all around us?” video that can be viewed at the BBC’s website and which in part took inspiration from the A Year In The Country: Wandering Through Spectral Fields book. Links for the videos and Twitter page are below.