Part 2 of a post on the book In the Company of Ghosts – The Poetics of the Motorway which is an exploration of British motorways via essays, poetry and fiction (Part 1 can be read via this link).

As mentioned in Part 1 of this post Edward Chell notes in the book’s Foreword that the freeway, the US equivalent of the British motorway, is a “trope at the heart of American culture” and there is an almost mythological aspect to how they are presented but he goes on to say that the British motorway is “a more subdued sibling; less epic, more dowdy, with it’s own peculiarly subversive enchantments” (which, as mentioned in Part 1, include the likes of J. G Ballard’s novels Crash and Concrete Island.) 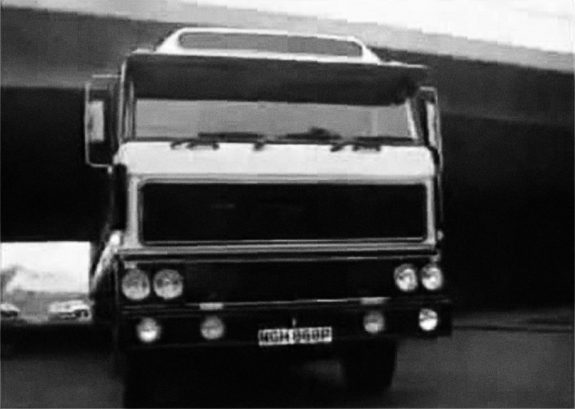 Despite such “peculiarly subversive enchantments” and literary explorations of “hinterlands” it could be argued that the less mythological or more day-to-day aspect of the British view of roads and motorways takes precedence culturally; this is a duality referred to in the Foreword when discussing an iconic advert for Yorkie chocolate bars which was broadcast on British television in the 1970s. This attempted to create a romanticised idea of the British truck driver as something of a cheeky, free spirited road warrior who had an easy charm with the opposite sex but as also noted in the Foreword the reality of suck work and life was probably considerably more prosaic and concerned with basic body functions.

To a degree this advert could be considered an attempt to connect British truck drivers with their more romanticised American equivalent, something which is given emphasis by the advert’s use a vaguely American Country and Western style song that would not be out of place in Samuel Peckinpah’s 1978 hit film Convoy, which focuses on American cultural mythology of the truck driver as a freedom loving anti-hero. (The film was inspired by the 1975 novelty country pop song Convoy by C. W. McCall, about a fictional trucker rebellion that drives from the West Coast to the East Coast of the United States without stopping and which reached Number 1 in the US and Number 2 in the UK pop single music charts.) 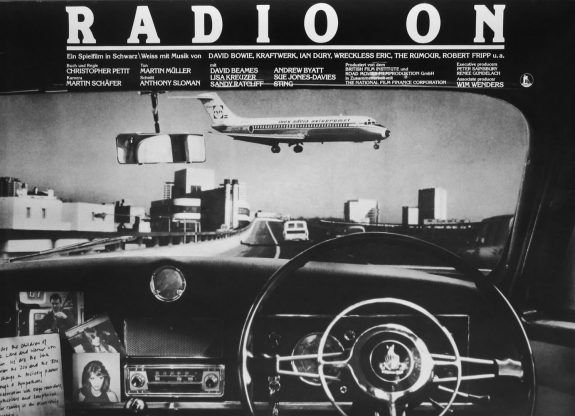 Chris Petit’s Cult road movie Radio On from 1979, about a man who drives from London to Bristol to investigate his brother’s death, connects with the above mentioned duality in terms of British roads and how they are represented in creative work; it has both a gritty, dour late 1970s almost kitchen sink film like view of the British road system but also a certain European aesthetic and stark glamour:

“The film… looks like nothing else shot here before or since. That’s mainly because half the crew was German. Wim Wenders was an associate producer, and, crucially, Martin Schäfer was the cameraman, and so the British landscape is partially viewed through a German lens. Watching it now, you might mistake parts of Bristol and London for Berlin in the late 1970s. The atmosphere is gloomy, the weather overcast, everything captured in grainy black and white. Of course, the synths of Kraftwerk and Berlin-period Bowie on the soundtrack help… Another reason Britain looks like Germany in the film is Petit’s choice of locations. He’s got a thing for flyovers, high-rises and motorways. This was the cityscape that shot up in Berlin following the Second World War, and seemed to be emerging in Britain.” (Oliver Lunn, writing at the BFI’s website.) 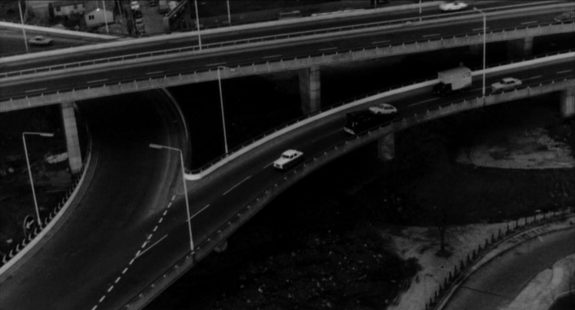 However, as Oliver Lunn goes on to mention such brutalist architecture and structures have proven contentious in Britain, which connects with a comment in the Foreword of In the Company of Ghosts that in the 1990s there was a change in attitude to roads and road building in Britain, with a growing concern for their environmental impact. With this change the earlier mentioned initial optimism that accompanied motorways and large scale road building in Britain from the late 1950s onwards and their presentation as something of a panacea for progress and prosperity faded considerably. 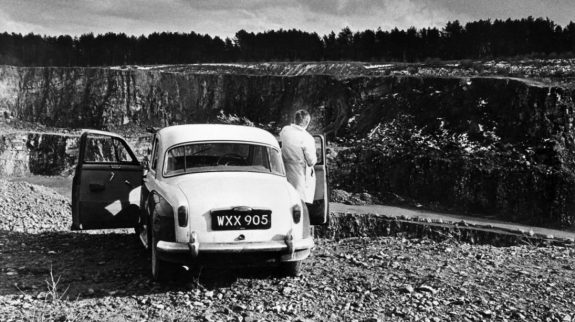 Alongside the spectral, ghostly sense of lost futures that can be associated with them, the Foreword suggests that Motorways are places which are layered with the ongoing resonations and echoes of the past (and to a degree the present, as these are still functioning parts of the nation’s infrastructure) and that it is these which the book explores

“Ghosts are surprising bedfellows of the service roads and hard shoulders of our six-lane network. These arterial routes leave clues to villages buried, desire lines severed and wild places defiled. They echo to the chants and broken glasses of football coaches, road racers and un-belted joy riders, or the sighs of furtive love making in cramped Ford Escorts parked on ‘dead roads’. Echoes, after-images or ‘ghosts’ resonate: the soft underbelly of a world so close. The contributors identify and celebrate these differing ghosts.”

Some of those echoes and ghosts are references to John Davies’ contribution ‘M62: in the company of ghosts”, from which the book takes its name and the following text is quoted from:

“I walked home, from Hull to Liverpool, following the route of the M62. Staying within earshot of the carriageways through the motorway’s rural sections; wandering off-line to spend days in the towns and cities en-route. Seeking local company, to hear stories of life on that road. Two months of deliberately slow travelling, through an unusually mild autumn. All the way, I found myself in the company of ghosts… All along my two-month journey I had seemed to be sensing ghosts. Absences in the presence. Presences in the absence. I gazed out from Hornsea in awareness of the ancient villages of Holderness lost to the brutal North Sea… I became fascinated by the numerous ‘dead roads’ en-route: once vibrant highways or viable country lanes which were sundered by the building of motorways and its service routes…” 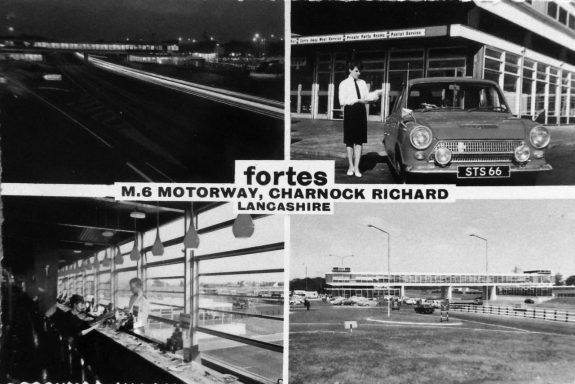 In the Company of Ghosts does not appear to be all that widely available but it can be ordered via erbacce-press’ website, the link for which is below.